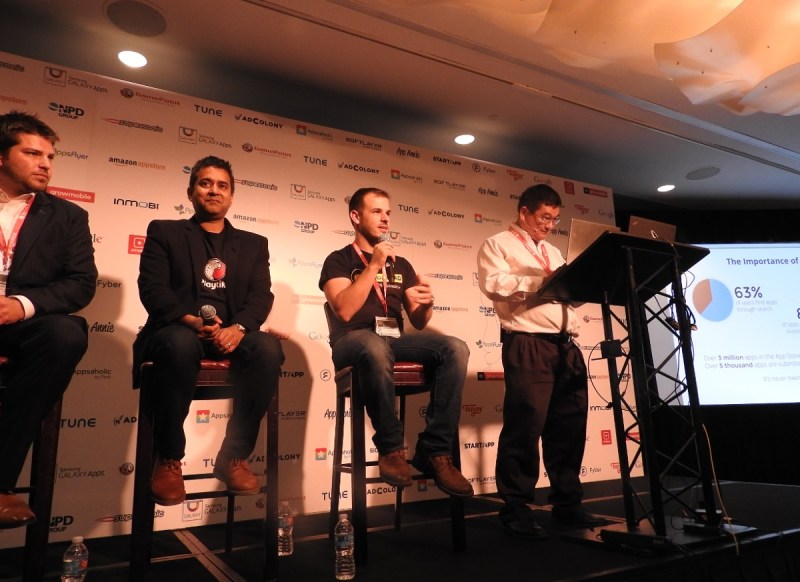 Above: Left to right: Blake Pollack of The ASO Project, Jeet Niyogi of Playtika Canada, Yonatan Dotan of YellowHead, and Dean Takahashi of VentureBeat.

GamesBeat: And you’re revisiting this when you change or update apps, or when the app stores change themselves?

Niyogi: Updating apps is the best time to do it, of all the different levers we have access to today. Just like the SEO world, everything changes. What’s a key driver today might not be a key driver tomorrow. You have to be aware and on top of what’s important today.

ASO isn’t necessarily an everyday thing, where you dedicate a certain percent of your time to it. It depends on how often you update your game. Whenever you decide to make a change, you can take a look at the different levers and make a decision.

Pollack: If you have both iOS and Android, with iOS you have to change things like names and keyword on the update. Android, you can submit something and in a couple of hours it’s approved. We’re seeing quicker results from iOS than from Android, though, even though it takes two weeks for Apple to put through your changes and two hours for Android.

Some bigger companies have schedules of when they’re releasing the next version of an app. That’s when you have to get ready and figure out what you’re doing next from an optimization standpoint.

Malafeev: Two years ago, if you went on LinkedIn and looked for people that did app search optimization, you’d have a hard time finding any that even mentioned it in their marketing bio. What we’ve seen over time is a number of marketing professionals who’ve started acquiring these skills, whether they’re bringing them in-house or working with somebody else outside. We’re seeing a strong trend toward this expertise coming into companies.

A lot of companies are hiring specifically for these roles. If you go to the jobs section of any major game studio, they’ll have a couple of positions open where one of the requirements, or even the primary responsibility, is to work on app store optimization. These are the most sophisticated folks in the industry, the ones who really know what’s going on, the ones who are generating revenue and downloads. Here’s where their focus is. From an ROI perspective, these are things that make sense.

Pollack: I come from an SEO background. When we look at the most successful websites, we look at where the revenue comes from on a very successful SEO campaign. When done correctly, some of the top 100 e-commerce sites—More than 67 percent comes from SEO. Eventually, everyone’s going to realize this needs to be important. You can always pay for more installs, but the LTV is what’s important. 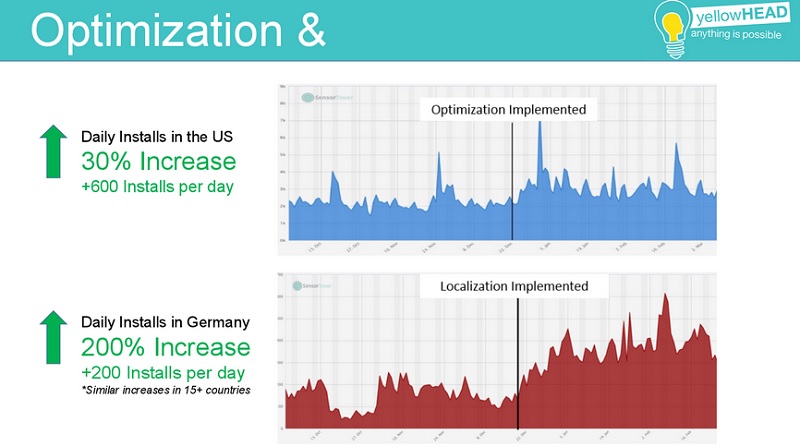 GamesBeat: What are some other things you can influence, like ratings or reviews or pictures?

Malafeev: You can split that into a few different parts. Ratings and reviews, we’ve been very interested in those in the past. We did a case study on this with an app, a social casino app. At some point in time they launched a prompt to their users which said, “Rate us five stars or we’ll remove 500 coins from your account.”

Of course you can’t actually do that. Apple doesn’t give you information on how well anyone has reviewed you. But the average user doesn’t know that. The outcome that we saw there, overnight they went from three or four positive reviews to something like 600 positive reviews. Directly after that – and it’s a bit of a testament to how the app stores aren’t seeing things like this yet – this was a relatively unknown application, and suddenly it jumped on major keywords, from 150th place to second or third.

A few things can have a massive effect there. It’s going to be your actual star rating. The truth is that if you look at most of the top applications, they have between four and five stars. It’s important, but you don’t have a massive amount of room to maneuver within there. But the number, the volume, the velocity of reviews you’re getting is massively important. That gets into how you get products out as well. You don’t want to annoy or manipulate your users. There’s a bit of a fine line. It’s something we’ve started looking at more.

Pollack: Apple’s coming back on that. We’ve had apps we’ve worked with where we’ve incentivized users to post reviews. We’ve had apps kicked off the App Store until that was removed from the app. It’s a thin line. A lot of apps will still do something like a social media post where they’ll give you coins, but Apple will shut that down more and more. They want the best experience for the user, and that’s not something that manipulates their rankings.

GamesBeat: Anything about screenshots, the images you’re using?

Niyogi: It’s very important for converting people who reach your landing page. Your visuals have to have relevance. If you’ve gotten the user that far, you’d better have something to get them to install your app in the first five or 10 seconds. We’re doing videos now, and that’s working well for some publishers. The description and “what’s new” is also very important, especially with Google.

Pollack: You can get to the top of different searches, but the reality is that if no one’s converting—Icons and screenshots should all be considered an optimization technique. We can get you up there, but if people don’t see you, they’re not going to convert.

Malafeev: A lot of companies have gotten advanced enough to realize these things, but still, every once in a while you’ll go through and see a major application where their first screenshot is just their login screen. These are basic things. You’re adding calls to action, marketing messages, making them look aesthetic.

An A/B testing platform for iOS came out with an interesting statistic showing that users are split into two groups, half and half. There’s what they call instant decision-makers, people who make it to your store page and right away hit the install button or right away ditch. The other 50 percent are explorers. They’re going to look through your screenshots or look through your description, although very few people actually go that far. You have to cater to both. Screenshots, if you’re not putting the time into them, it’s something you’re just leaving on the table.

Pollack: An app I worked with did just what you mentioned. Their first screenshot was the login page. After we changed it – without changing keywords or anything else – they still ranked in the same position, but their downloads went from about 300 a day to 2500. It was a massive increase. That’s straight conversion. It’s extremely important.

Dotan: To add to that, Apple recently released an analytics product where they show conversion from the App Store page to downloads and installs. We have access to a ton of data from developers and publishers, so we aggregated it and saw some dramatic changes between different folks. Some might be converting at 40 percent while others are converting at only six or five percent. Not only does this all affect organic users or users coming from app store optimization, but it’s also affecting all your repeat acquisition campaigns.

These things are all dynamic and changing. When iOS 8 came out, you had two screenshots side by side. We saw a lot of companies try to play with making the two screenshots work together. It’s important to react to changes in the app stores.

GamesBeat: What about localization? That’s my last topic for you.

Malafeev: Within apps, and particularly within the world of gaming, the reality is that it doesn’t matter where your user is located for the vast majority of applications we deal with on a daily basis. You don’t need to speak English to get along with the application.

That being said, if you look at users in, say, Denmark–People in Denmark speak excellent English. They won’t have any problems using your application. But it may well be that they’re searching for whatever you offer in Danish. If you haven’t invested in that, they won’t find you. App store optimization, particularly in gaming, is making it easier to go global with relatively minimal effort.

It’s way different from the world of SEO, where you have to get an agency to translate and culturalize your website. It’s not just translation. In app store optimization, you have to do keyword research in those languages. You have to figure out what people are looking for. There’s still expertise and time and all that. But it’s an easy way to get more market share.

Some of the applications we work with, when we start off we see that 85 percent of their installs are coming from the U.S. Besides that it’s a bit of the U.K. and Canada and Australia. After the localization process, we see that go down to 50 percent, 40 percent, because they’ve opened the doors to the rest of the world.

Dotan: Localization isn’t that expensive on this scale. Your app isn’t a book. It’s one of the quickest ways, if you’re not localized, to get to a bigger audience. If you look at the data on the top-performing applications, whether it’s Clash of Clans or Candy Crush or anybody, it’s not like it’s 2012 where 80 percent is in the United States. It’s spread all over. That’s because they’re putting effort into localization.

Niyogi: It depends very much on the genre of your game. Do you get enough traffic to make it worth localizing the game? But from all experiments, if you’re localized and culturalized, and you’re localized on the ASO side, it works very well. Poker doesn’t need a language, but in most cases localization on the ASO side is only a benefit.