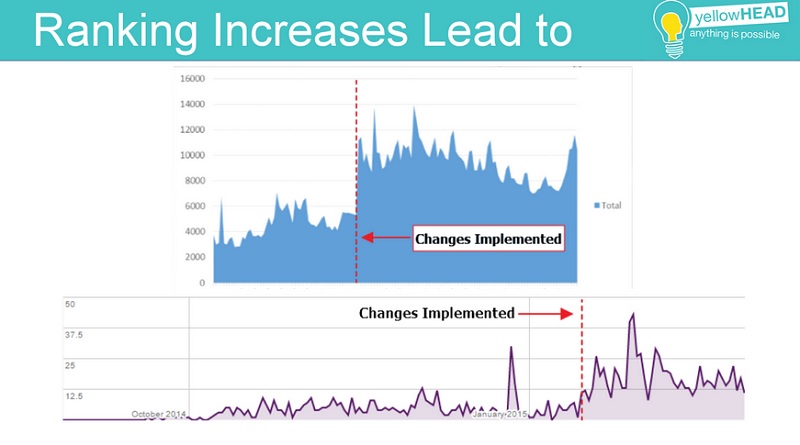 Above: YellowHead shows the kind of results you can get with ASO.

Audience question: You were saying that you can update on Google right away, but you sometimes see results from Apple faster. Google’s store doesn’t fully index everything for about 30 days. How long should I [wait] after a change to judge the effect of a change?

Pollack: We like to optimize no more than once a quarter. There’s a marination period. Even though iOS makes changes pretty quick—Once you put in keywords, you can see changes quickly. However, until people start adding more reviews again – your reviews reset on iOS every time you upload a new version – we like to see a marination period where the reviews are back to where it was and the keywords come in place together. So I’d say once every three months. That’s what we do.

Dotan: We look at a lot of titles that taken an opposite approach on iOS and update very often. They’re able to get new reviews very quickly because they’re larger apps that have a lot of users. They have a bi-weekly release cycle. The thing they may do, though, is that they might only change for a couple of countries in Europe, not everywhere all together. It’s a lot of work and effort if you’re doing a complete rehash. But with iOS you can only change when you update to a new version, so you might as well take advantage.

Question: I’ve heard various things from sources that aren’t totally reliable – like, with Google, you should use a certain keyword five times in a description, but not more. You have to separate them. You should use words in reviews people leave. Is there any truth to any of that?

Pollack: As far as we’ve seen, it’s not a numerical thing – five times, eight times – but it’s a keyword density thing. If you have a 200-word description and 30 of the words are a keyword, that’s not going so well. What I would suggest is, do your keyword research, know what words you want to use, and then use them in the text in a way that—They’re there, but it’s still natural. It doesn’t feel overdone.

Question: We’ve started diving into this in a big way, but we’re finding that there are keywords that are very well-searched. And yet there are also keywords that are searched for a lot, that aren’t in any of our apps, and very few apps are using them. We’re taking an approach for doing up relevant keywords. My question is, when will everyone figure out that they don’t have to use the particular keyword that every competitor is using and find a word that’s very similar but that no one is using? And when will this all level out, where Apple will eventually figure it all out? And isn’t Apple weighing this with the frequency of downloads for your app as well?

Malafeev: For the second question, the way that we see an app’s ranking for any particular word is just—We call it strength times relevance. Strength is how many downloads you have, sales you’re getting, ratings, reviews. On the other hand you have the relevance side. If you haven’t optimized for something you’re not going to be there.

For the first question, that’s a great strategy depending on what you are. If you’re going for smaller keywords, at some point you’ll hit a ceiling. At the same time, if you’re a small application, you’re not going to be ranked no matter how well you optimize for those top keywords.

Question: Do you see ASO being less effective over time as more people get into it? How soon do you see that being potentially an issue?

Pollack: I don’t think it’ll be less effective. If anything I think it’ll get more important. It will just be more complicated. It’ll start encompassing other factors. Right now keywords and such are very important. Google has a very sophisticated algorithm on the web. Eventually they’ll be just as sophisticated on mobile.

Notan: As it becomes more complicated and more companies are doing ASO, if you’re one that’s not doing it—It’s going to be a bit of an arms race. It’s moving toward an equilibrium, but if you’re not paying attention at all, you’re falling behind everyone else.

Question: Is there any tool that gives us visibility into how often a certain keyword is searched for?

Pollack: The short answer is no, not directly. The app stores don’t release that information. But tools like SensorTower use a lot of different information, including the Google keyword planner and the number apps that are found for a certain thing, to try to estimate. There are things that aren’t quite fully baked yet, but there are all sorts of keyboard apps, for example, that have SDKs indicating what users are searching for and then start to figure out aggregated data for that. Those are ideas that are only half there so far.

Dotan: Full numbers haven’t been released by Apple and Google so far, but everyone’s working on using the best proxy signals to get to that.

Question: Can you speak to different pricing strategies between different vendors in the space?

Dotan: We work on a monthly retainer, on an ongoing basis.

Pollack: We’re strictly performance-based. We come up with a baseline of where the organic is and then we charge on a per-install basis.

Question: What are the primary differences between the Apple and the Google algorithms? How often do you see them being updated, and how big are those updates?

Pollack: Google is constantly going to be changing it. Sometimes you’ll see an algorithm release from Google that they announce, but they’re probably updating it on a weekly basis or a monthly basis. That’s how they are on the web, and I’m sure mobile will get to that point. For iOS I’m not sure. It doesn’t seem like they’re anywhere near as sophisticated.

Dotan: There used to be quarterly releases after Apple acquired the Chomp team, but they seem to have slowed down. There’s not an ASO shakeup happening every quarter.

Niyogi: Being on top is one thing, but choosing algorithms is really—If you want to convert and retain and monetize users, you need to create a landing page that’s relevant for the users you’ve defined in your strategy sessions. Do all these things that people are doing, but just chasing that—It’s just like the SEO world. Apple and Google are going to catch up.