Released September 1 for PlayStation 4, Xbox One, and PC, Mad Max is a third-person open-world action game that you’ve seen dozens of times before. Have you played Assassin’s Creed, Far Cry, Watch Dogs, Arkham Knight, or Red Dead Redemption? Well, you’re already overly familiar with everything Mad Max has to offer save for a few exceptions. You find collectibles, takeover posts, get upgrades, and punch people in the face. But despite the lack of risk or originality, Mad Max is still a fun action romp that makes decent use of its terrific license.

It’s a game that’s quite light on plot development. As you’d expect, you assume the role of Max Rockatansky. He’s slightly different than both Mel Gibson’s and Tom Hardy’s cinematic interpretation of the character, but one that’s in line with Miller’s vision. He’s talkative, and even sympathetic and kind at times, but he’s still ruthless and has basic motivations. All he wants to do is cross the Plains of Silence. Of course, his trek is rudely disrupted by Scabrous Scrotus, ruler of the oil-rich city-state Gastown and the son of Fury Road villain Immortan Joe.

After a violent showdown that ends with Max stripped of all his possessions and left for dead at the side of a road and his car, The Interceptor, dismantled, he quickly meets a deformed hunchback named Chumbucket. The creature, who believes Max to be some sort of saint, agrees to help him rebuild a new car in order to exact his revenge and seek salvation. 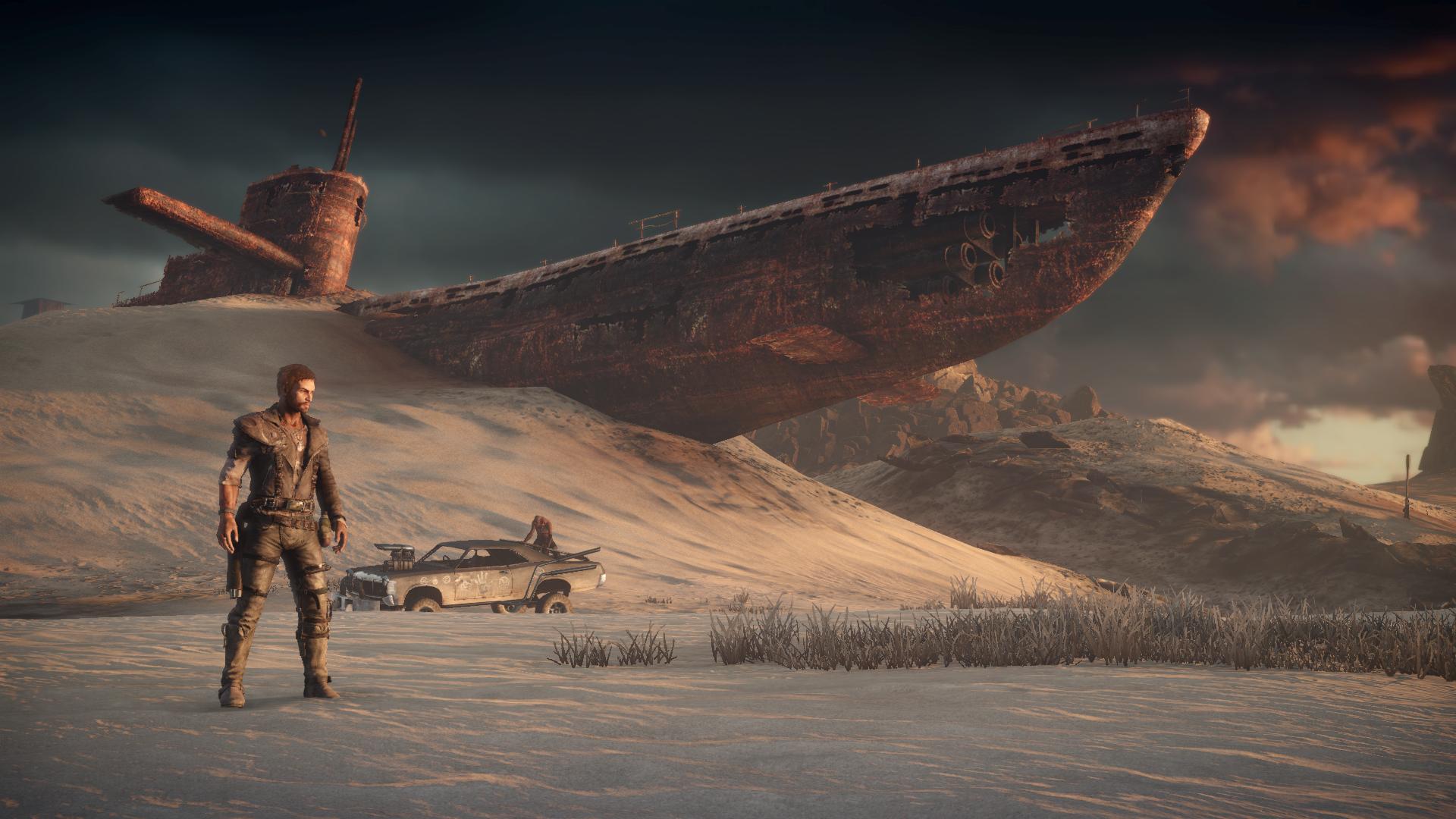 Above: All is lost.

The most striking thing about Mad Max, and the closest Avalanche comes to matching Miller’s own brilliance and vision, is the art direction. Mad Max is heavy on brown and yellow color palettes that perfectly paint this monochromatic and harsh landscape. The cinematography, for lack of a better word, creates a wonderful juxtaposition. Mad Max’s world is unforgiving, decaying, deranged, and bloody, but it can’t help but look so damn beautiful.

The character designs are outlandish, especially for individuals that have been affected by the apocalypse a lot more heavily than others. Chumbucket is a thing of nightmares. Terrific lighting effects and a day/night cycle complement the striking endless desert; you can always spot the mammoth sun glistening in the background. The setting is full of what’s left of the life before: a large commercial plane, billboards, broken bridges, ships, and more, all covered in sand.

Even though Mad Max is largely typical, its aesthetic is anything but that.

Mad Max offers the player an exorbitant amount of customization and upgrade options. By collecting scrap – the game’s currency – you can purchase powerful upgrades for Max and his car. You can turn both into intimidating physical specimens that’ll pretty much devastate anyone and anything that stand in their way. Considering the game’s combat system, which is identical to the Arkham games’ freeflow combat – Max can learn to stay in fury mode longer. It’s a Wolverine-type of X factor that turns him into a one-man wrecking crew.

He can also gain powerful new armor and larger ammo belts and learn new combat moves. With his car, which is pretty much the second main character in the game, you can upgrade its tires, armor, exhaust, engine, and plenty more. These upgrades will constantly change the way you play. I decided to upgrade my armor first, which made taking down enemies a bit easier. But I ignored my engine entirely, and I had a difficult time winning races as a result. The upgrade system gives you a rewarding sense of progression, which is a must considering how many objectives you’ll complete by the end of the game.

A mysterious figure named Griffa also roams the wasteland waiting to give Max some philosophical lessons on what his next steps should be in his life. By completing specific challenges, like killing 10 enemies during a massive sandstorm, you gain precious Griffa tokens that can be used in exchange for additional upgrades, like gaining more health or using less fuel while driving. 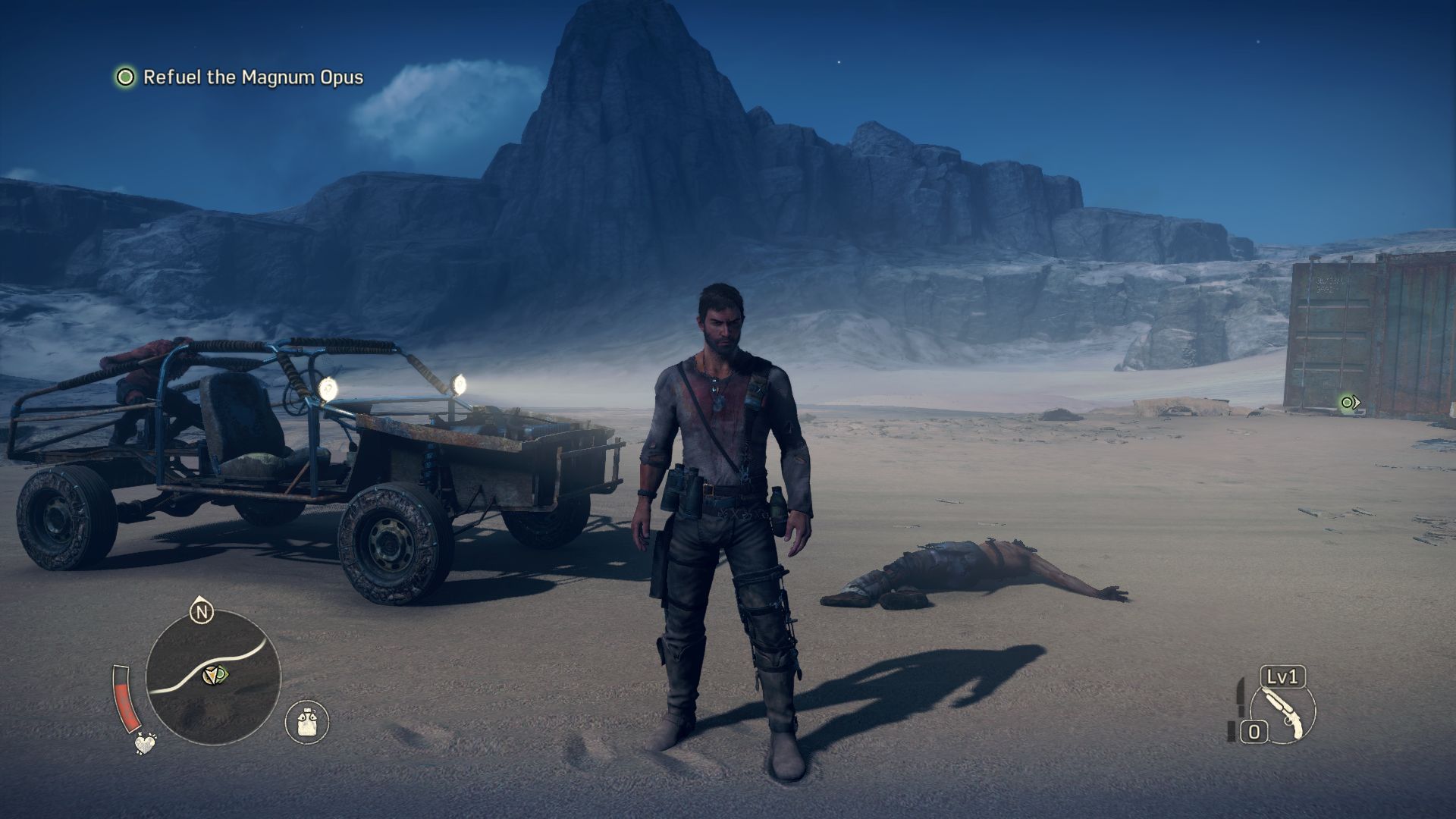 Above: You’ll be doing this a lot.

Mad Max employs sound gameplay mechanics that work well, but it can’t help itself from feeling repetitive not far into the game. Yes, in this massive open-world you will find a bunch of collectibles, like old photos that give you a glimpse of the past. Yes, you will have to find balloons that act like radio towers in Far Cry that will reveal objectives and other map icons. Yes, you have to conquer guardposts to decrease enemy influence. Yes, you will complete side missions that feel bland, and fail to tell their own interesting little stories. And yes, you will have a decent time doing all of this before you inevitably grow tired and move on to the next thing.

It’s the same open-world game that so many developers have been making these past few years. Going beyond the brilliant art direction, Avalanche Studios fails to build a more interesting game around the Mad Max license. Where are the crazy side missions involving high-speed chases or memorable characters that can provide interesting stories? Why does this game employ the exact same combat system that developer Rocksteady created with the Arkham games (other than they’re both from Warner Bros.)? Avalanche doesn’t innovate on it but instead fails to conjure up fighting that’s just as good. The car combat also feels a lot more sluggish than it needs to. You spend more time trying to hit a vehicle off the road than using any of your car’s upgrades due to the severe lack of ammo.

Avalanche has filled Mad Max’s world with objectives and missions. But the studio forgot that it’s the quality that counts rather than the amount of senseless content you can throw at a player.

Similarly, the main story gives you even less motivation to complete these mindless objectives. It’s true that Mad Max: Fury Road has a very straightforward narrative, but it’s focused. Max is heavily supported by brilliant side characters that have understandable motivations, and this gives the film momentum. In the game, Max is all alone save for Chumbucket, but he’s nowhere near as nuanced or well written as Imperator Furiosa in Fury Road. Max has to carry the entire plot all on his own, and he was never a character capable of that. Just watch all four of Miller’s films. The only positive thing to note here is that the final act is miles better than the rest, but it feels too little, too late by that time. 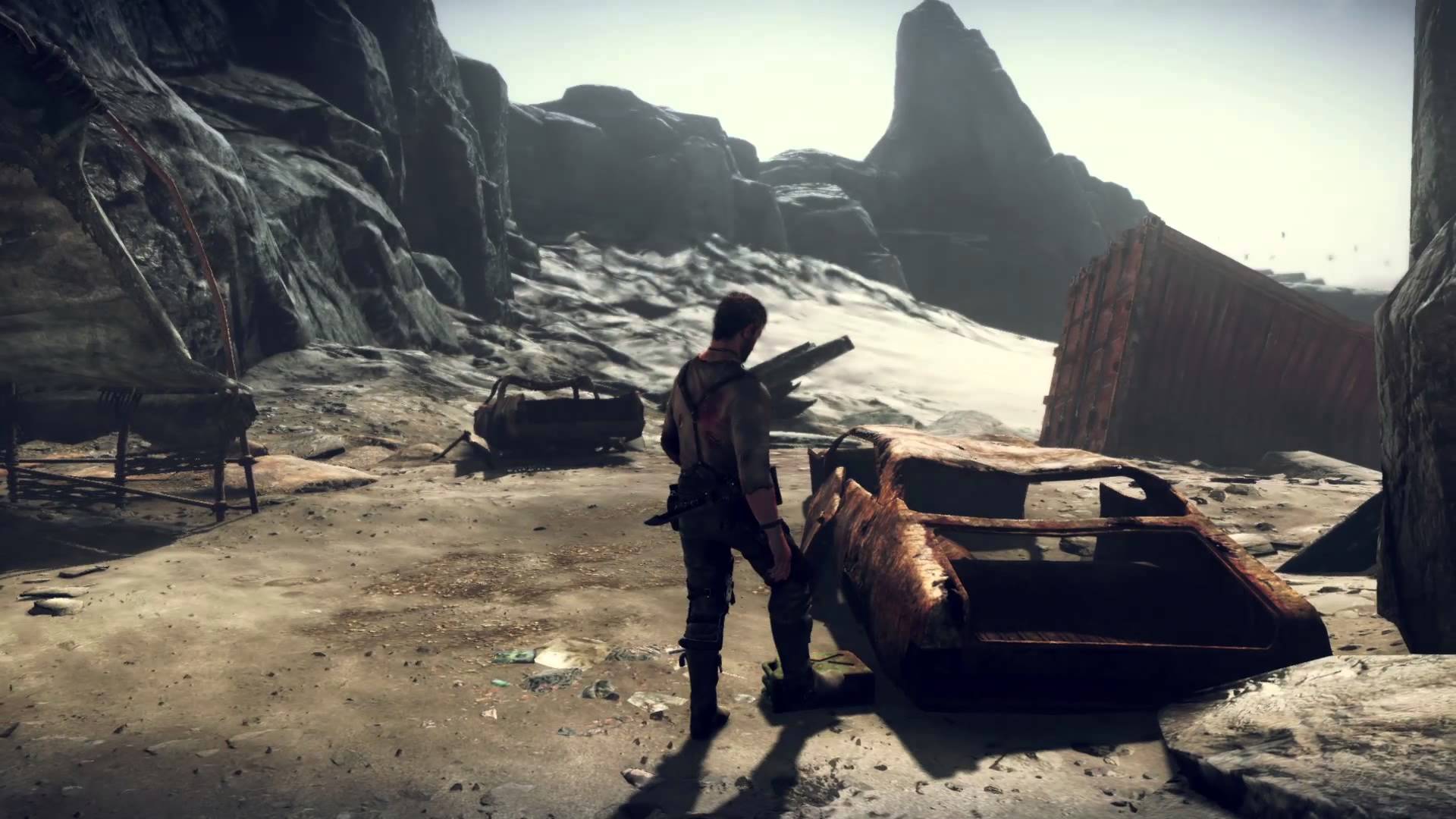 Above: Just looking for water.

Mad Max isn’t a terrible game — it’s actually well crafted. The problem here isn’t that it’s broken or unplayable but that it’s just boring. It feels like a game that should’ve released three years ago when designers hadn’t mastered the open-world formula or reiterated on it hundreds of times already. If you’re fan of the license and just want to spend more time in George Miller’s sadistic world, you’ll find a fair amount of enjoyment in Mad Max. Just make sure you aren’t expecting anything more than that.

Mad Max is available now for PlayStation 4, Xbox One, and PC. Warner Bros. Interactive Entertainment provided GamesBeat with a PS4 code of the game for the purposes of this review.