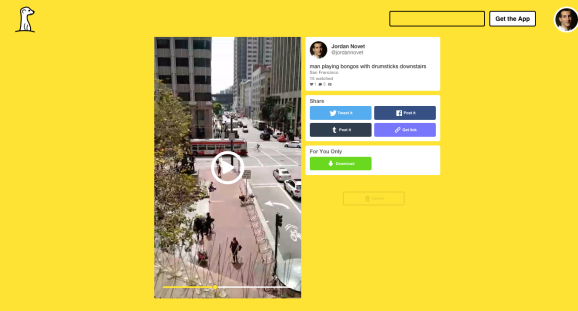 A new "download" button appears next to your saved streams in Meerkat on the Web.

Live streaming app Meerkat announced today that users who save video streams they record can now log in to the app on the Web and download those streams. From there, it’s possible to watch streams offline — or upload them to other websites.

The feature update was working live for me just now. I downloaded a 20-minute stream I had recorded and saved a few weeks ago and was able to play the 80MB video in MP4 format on my MacBook with no problems.

Twitter-owned live streaming app Periscope, by contrast, does not currently let users access streams that are more than a day old on desktop — even though Periscope appears to have a larger user base than Meerkat. (Periscope, for its part, is at work on an Apple TV app, according to a report today from TechCrunch.)

But today’s update to Meerkat shows the San Francisco startup rolling out still more features to stand out from competitors. Last week, for instance, Meerkat introduced polls and in-stream photo-sharing. A few weeks before that, Meerkat introduced support for GoPro cameras.

San Francisco-based Meerkat announced a $14 million funding round in March.