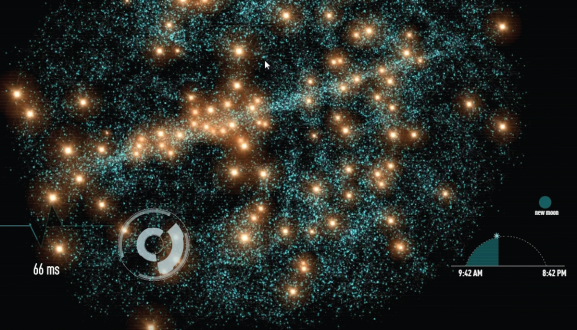 InsideSales' visualization of its Predictive Cloud

The company, which has provided a platform to help salespeople find leads and the best ways to close deals, is announcing that it is opening up its crown jewels as The Predictive Cloud. This is the first time its predictive analytics engine, fueled by its massive collection of sales-related data, is available to outside application developers.

I asked CEO and founder Dave Elkington whether offering his company’s key engine and massive data to any takers was essentially helping his competitors.

“I would be delighted if my competitors use this,” he told me. Even if someone else duplicates what InsideSales is doing, he said, “I make money.”

The company describes the new service as the “world’s first predictive cloud for sales,” because any app builder can now add InsideSales-driven strategy to its product via an API.

But, as Elkington acknowledged, this new offering extends beyond InsideSales’ bread and butter of recommending which companies or individuals might become customers or how best to land a deal.

“When I started this company,” he said, “the concept I wanted to build [was] a ubiquitous learning machine,” with sales as its initial implementation.

This new service, he noted, “goes beyond what InsideSales has been doing,” with the goal of providing “a universal, ubiquitous prediction platform.”

He compared this new phase of his company to when Amazon went from being an online retailer to providing cloud and ecommerce services to other companies.

“Is Amazon competing with other web stores?” he asked.

Powering this concept is the company’s Neuralytics predictive engine, which uses machine learning to turn data from about a hundred billion sales interactions into recommendations for next steps — for sales, certainly, but also for applications in government, healthcare, and retail.

Or, in the company’s words, “an Amazon-style recommendation engine for business.”

To date, half a dozen companies have employed the wisdom generated from InsideSales’ anonymized customer and deal data, their own data, and external sources.

Meeting productivity provider EventBoard, for instance, is using the Predictive Cloud to suggest the best combos of conference rooms, invitees, meeting topics and times, and social sharing to create the most productive meetings.

Ecommerce platform CloudCraze is employing it to suggest the best ways its users can sell their products, and Cloudbilt, maker of sales territory management app MapAnything, is adding InsideSales-powered NeuralScore to assess whether a lead is likely to generate a sale.

B2B marketer Demandbase is hoping to improve online advertising effectiveness in reaching customers, while employee advocacy platform Dynamic Signal wants to better identify when and how social sharing will have the biggest impact.

And LogMeIn, which offers the popular join.me online meeting service, wants to use it for identifying which of its customers are most likely to buy the premium version.

Elkington said that the accuracy of the new service is high, although difficult to quantify over such a wide variety of use cases.

For sales, he said, the platform’s average uplift is about 30 percent for closing deals or generating more revenue.

In addition to the ambition of becoming the business prediction-equivalent of Amazon Web Services or Amazon’s hosting of other sellers, Elkington sees his company’s massive and unique data as a key differentiator from other predictive platforms for sales like Fliptop (recently purchased by LinkedIn) or Lattice Engines.

“Not all data is created equal,” he pointed out.

He described InsideSales as having “a massive crowdsourcing of data,” with anonymized data points for about 100 billion or so sales transactions from the last decade, assembled from about 60,000 client companies.

This includes successful and unsuccessful sales calls, email campaigns, web visits, and proposals, as well as about 120 million profiles of B2B and B2C buyers and about 35 million companies that have been sold to, as well as contextual information, like whether there’s a “halo effect” in the Phoenix area because the Suns’ basketball team won last night.

The platform is not providing the data itself, he pointed out, but the profiling of the data. No two situations are identical, he said, “but the conditions are.”

It’s this tendency for similar people to react in similar ways to similar conditions that forms the basis of predictive services. It was also, Elkington told me, central to his senior thesis on the classification of human knowledge, when he was a philosophy major at Brigham Young University.

“Humans learn in a systematic, pattern-bound way,” so that enough data can help predict whether a phone call would be the best way to make a sale in this situation, or whether an email would be better.

“If we know enough about everyone,” he said, “we can determine how they’ll behave next.”

One wonders if this prediction platform would have enough data and power to predict what InsideSales will do next, now that it has set Amazon as its role model and the future of anything in business as its territory.

This new launch tops a boffo year for the company, which included the hiring of ex-Salesforce executive Jim Steele as new chief customer officer, a new office in London, a $60 million investment round led by Salesforce with Microsoft’s participation, and the purchase in May of sales pipeline forecaster C9 Inc.

The Predictive Cloud service, which has been in beta for the last six months, is now in tech previews, and will be launched next year.