SAN FRANCISCO — Apple chief executive Tim Cook confirmed that the fourth-generation box will be the first Apple living room device that uses apps to actively competes with video game consoles thanks to new hardware, software, and peripherals all targeted at gamers.

Confirming previous rumors, the new Apple TV will have an app store with games that are playable on your TV. Clearly, Apple intends to build upon the disruption of the handheld console market (think Nintendo’s line of DS and 3DS systems) that began with its App Store, iPhone, and iPad products. Now it’s clear that it aims to disrupt the consoles with lower-priced (but also less capable) hardware and apps that are far cheaper than $60 console games.

The new Apple TV will ship with a built-in App Store and Siri Remote voice command support. It also has Bluetooth controller support (which may not be that appealing, as that’s slower), so players can add their own third-party game controllers to play games on the TV.

“This is the new Apple TV, and we believe it is the future of television,” Cook said during the Apple Hey Siri event.

John Carter of Harmonix showed how you can play Beat Sports, a music-themed series of sports minigames designed exclusively for Apple TV. It will be available as soon as the new Apple TV ships.

Apple will also have other games, such as Activision’s upcoming Guitar Hero Live, a reboot of the music game franchise.

You can play a game on an iPhone and then pick up with the game on the Apple TV in your living room. It picks up where you left on the phone.

Apple is making a new tvOS — a new version of its iOS software — available today to developers, and consumers can get it when the new Apple TV ships in October.

Why is Apple targeting a narrower market with the new box? In some sense, Apple has already gained a lot of the TV-watching and movie-watching audience. Now it is adding one more category of entertainment, allowing it to target a wider audience with the same box. Apple typically throws its marketing dollars at broader audiences, but there’s some serious competition from the game consoles in the living room.

The game machines are entrenched, selling from $200 to $500, with the games selling for $60 each. Apple TV products enable you to play apps via your iPhone on your TV set using AirPlay, which can wirelessly send the image on the screen to your TV. So while you play on the iPad or iPhone, you can see what happens on your TV. This solution targets nongamers or casual gamers, but it hasn’t proven to be a threat to the consoles so far.

Apple also announced a near-universal Siri remote control with voice commands that can control Apple TV apps. By itself, this doesn’t sound like it would be really useful for gamers. But the remote also has motion controls, which could lead to some interesting applications such as using the remote as a steering wheel for a racing game.

The Apple TV’s Siri Remote lets you navigate the menus via voice commands. It can also be used as a game control device. Apple is reportedly allowing third-party Bluetooth game controllers to be used with Apple TV, but it didn’t highlight that capability on stage yet.

That capability  is key. If Apple offers more support for game controllers with pressure-sensitive buttons and joysticks, then gamers will be able to provide a wider array of games, the way that they want. These devices connect to iPhones and iPads already via Bluetooth connections, and they could be more appealing for gamers than past controllers.

It’s also worth noting that these Bluetooth controllers are already on the market, and they haven’t done well. One reason is that Bluetooth connectivity isn’t always reliable, and the controllers have been criticized — particularly by Nvidia — as being too slow. Nvidia’s own Shield set-top box uses a Wi-Fi-based game controller instead for speedy interaction that can keep up with super-fast fighting games. If Apple doesn’t support Wi-Fi-based game controllers, gamers might perceive it as a weakness and another reason to avoid the Apple TV box.

But in its favor, Apple has made it possible to create some cool games with high-end 3D graphics via its Metal applications programming interface, which enables games to take advantage of iOS hardware to the fullest. Games such as Super Evil Megacorp’s Vainglory and other iOS titles in the works look really good. These games are likely to be much more interesting to players and, given the rapid forward progress, could represent the biggest threat Apple poses to consoles. After all, the way to beat somebody else’s games is to come up with better games. 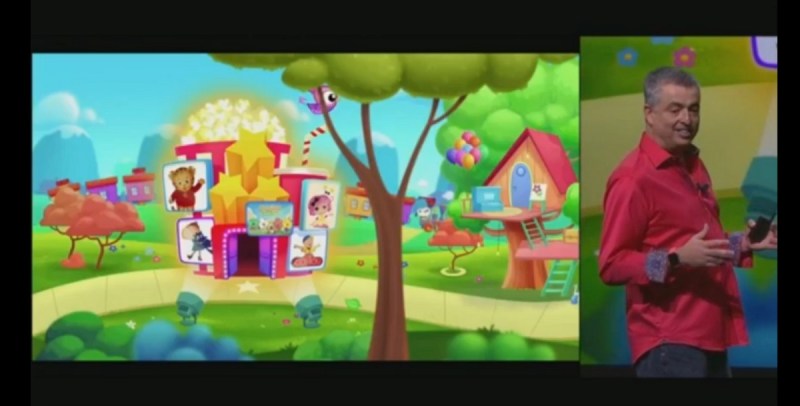 Above: Games on Apple TV

And game makers may be more interested in making their titles work with game controllers if they know that downloading to the Apple TV box is going to be a real option. So if Apple makes a good enough case to developers, the games will follow, and then the gamers will show up too.

It may be a stretch for the whole family to join in on Apple TV gaming, as the family-room TV is often reserved for watching TV in households. But the Shield set-top box has been quite popular among my family members for playing — Pac-Man. It’s not clear just how many families are going to go crazy over the idea of playing games on a TV via an Apple TV. But it’s one more entry in the battle for the living room.

Sight unseen, the idea of games on Apple TV is intriguing in the game development community.

“Having games on Apple TV is a necessary but far from sufficient scenario for people actually playing mobile games on TV,” said Matt Ricchetti, chief product officer at mobile game maker PerBlue. “A whole ecosystem needs to be built around it.”

And Kate Edwards, head of the International Game Developers Association, said she likes the “idea of games being played on anything.”

Apple is reportedly working on deals with content providers so that users will be able to give up cable TV subscriptions, but that isn’t expected to arrive until later, due to difficult negotiations. Apple’s new set-top box is also expected to debut alongside an iPhone 6S and iPhone 6S Plus.