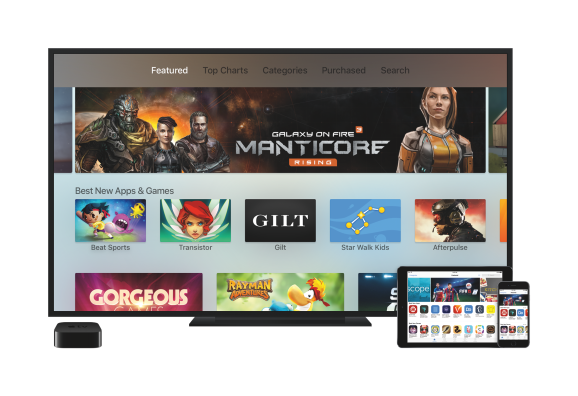 Apple today announced tvOS, a new operating system for the redesigned Apple TV. It’s been a long time coming, as the company has sold this type of device since 2007 but has never had a software development kit (SDK) or a standalone OS by that name.

Now, with tvOS, the Apple TV can run an App Store for consumers to choose from.

And developers can access the beta for the new tvOS SDK here. (Note that this version of tvOS is not compatible with older versions of Apple TV.) The new SDK is included with Xcode 7.1 beta, which is available now. And for those who want to get the new Apple TV Developer Kits, go here.

Up until now, Apple has worked closely with a small group of companies to assemble apps tailor-made for the Apple TV. The chosen few include sports leagues, TV channels, and news agencies. But now, with all developers able to make and submit apps for the Apple TV, consumers should be able to do a lot more with these devices.

This is one of a few major updates Apple announced for the Apple TV at its “Hey Siri” event today.

Apple was rumored to be introducing an Apple TV SDK back in 2012, but that never happened.

The fact that Apple TVs are much less popular than, say, iPhones, might help explain why there has never been an SDK for the Apple TV. In March Apple chief executive Tim Cook said the company had sold 700 million iPhones and just 25 million Apple TVs. To provide some perspective, the iPhone was launched in 2007 — the same year as the Apple TV — and its SDK became available the following year.

Apple simply might not have received a lot of developer requests for an Apple TV SDK relative to other devices over the years. Developers have so many other types of electronics they can build for. But today Apple is showing off several improvements to the Apple TV, and perhaps executives feel confident that Apple will be able to sell a whole lot more of these machines as a result, especially with a new OS and SDK for developers to rally around.