Dropsy is, on paper, what your grandmother has wanted more games to be more like.

As the clown in Tendershoot and A Jolly Corpse’s adventure game, you cannot fight, shoot, or even antagonize anyone. Your only action – aside from using or giving people items – is to hug with all of your goofy might. The official subtitle for Dropsy (out September 10 for PC, Mac, Linux, and both iOS and Android) is “A Point and Click Hugventure,” after all. Unfortunately for grandam, the world around Dropsy is a depressed swamp of apathy, cynicism, and the occasional surreal nightmare. I took the PC version for a spin to determine whether or not Dropsy would earn a hug from this jaded reviewer.

Bringing out the best of a defeated town 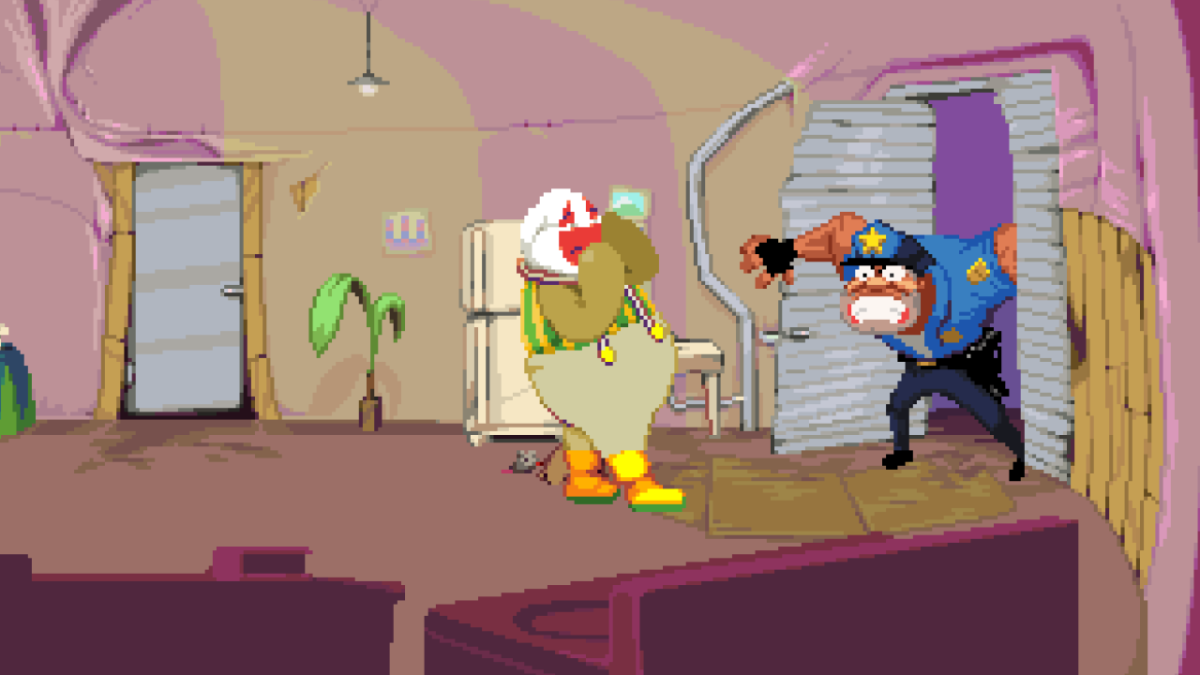 Above: Dropsy’s town is comprised entirely of miserable people in need of the clown’s skills.

This bloated, hideous-looking entertainer of children lets nothing stop him from spreading cheer. We first meet Dropsy and his family in the middle of a joyous performance at the circus, just seconds before a fire destroys the big top. The story picks up a few years later, Dropsy and his father living in abject poverty in the ruins of the circus tent on the outskirts of a desperately unhappy town.

But Dropsy doesn’t let that define him, or it could be that he’s just too dense to realize how sad he should be. And through his single-mindedness (and with occasional help from some animal friends), we hug our way through a litany of depression and misery. Following the main plot is smartly made ancillary to improving the lives of those around you. The strongest moments in Dropsy are when you take just a few moments – and maybe a previously innocuous item — to visibly improve someone’s outlook on life.

Not everything you do is epiphanic, Dropsy understands that affection is often bought, just as much as the next socially-minded game. Where the game excels is showing the grand results of small actions. A fire-and-brimstone preacher women sits alone in a playground at night, smoking a cigarette and wallowing in self-pity over her lack of worshipers. But after you find out the combination to the window lock of her church, she remembers the good works of her deceased father when she sees a homeless woman cold and hungry in the back alley. The preacher converts the church into a shelter, gives the alley a table and coffee service, and finally warms up to a hug (granted, from a distance) from Dropsy.

Dr. Seuss would be proud.

A smooth blend of the cute and the disturbing 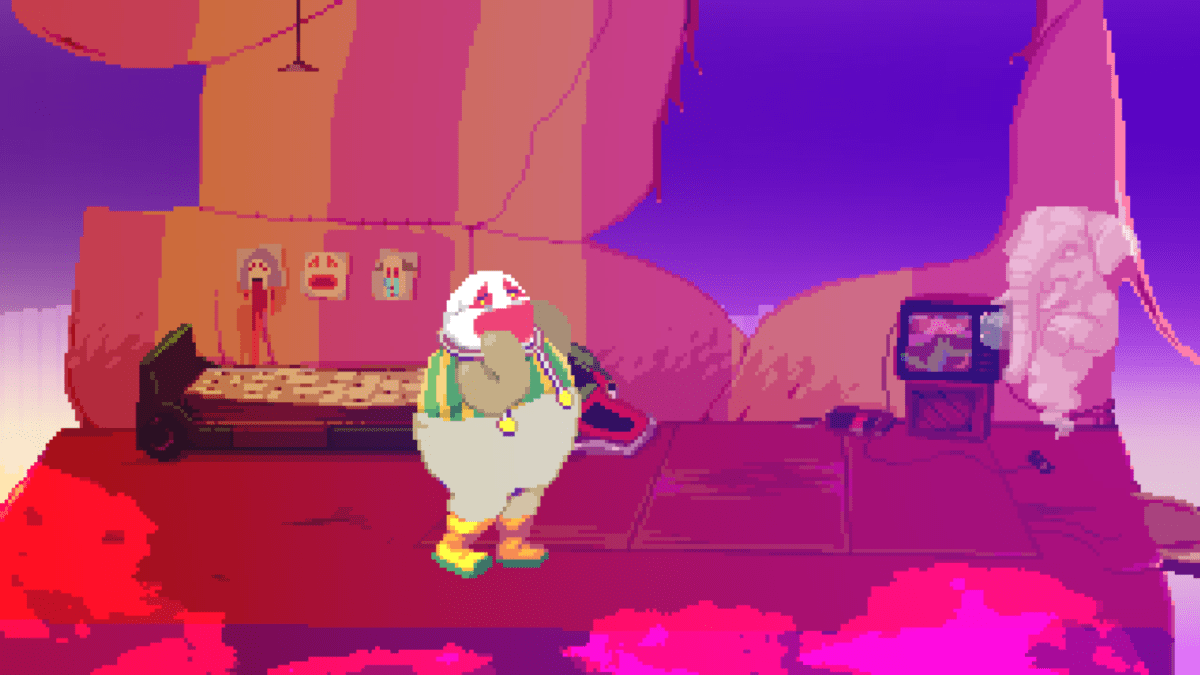 Above: Even when not soaked in blood, Dropsy’s dreams hint at some serious, unresolved trauma.

Dropsy’s dreams are off-putting even when animated in blissful pastels and filled with singing toys. The clown was certainly traumatized by the fire, but he never shows it outside of his head. He is just as chipper to visit the grave of the mother he lost in the blaze as he is to meet his sixteenth new friend of that day. Despite his off-putting appearance, the clown has nothing but good intentions.

Dropsy goes for a sort of anti-expressionistic approach, a bummed-out town realized in saturated, light colors and exaggerated proportions. A cartoonishly-drawn shopkeeper mourns his dead wife in a cemetery, two twenty-somethings stew in their idle animations on a stoop. This isn’t the world seen from Dropsy’s point of view, we get that in the pictures he puts on his bedroom wall throughout the adventure, this feels like a world that just hasn’t yet recognized how happy and bright everything is. In a gaming era defined by (often botched) attempts at “gritty” and “edgy” stories, Dropsy is a forcefully optimistic game. Death and misery surround the characters here just as much as (if not more than) most games. But rather than wallow in it, here the developers focused all attention – and gameplay – on overcoming it all. Dropsy certainly doesn’t have the most nuance, but it has no shortage of aspiration.

The ever-present opportunity for more hugs 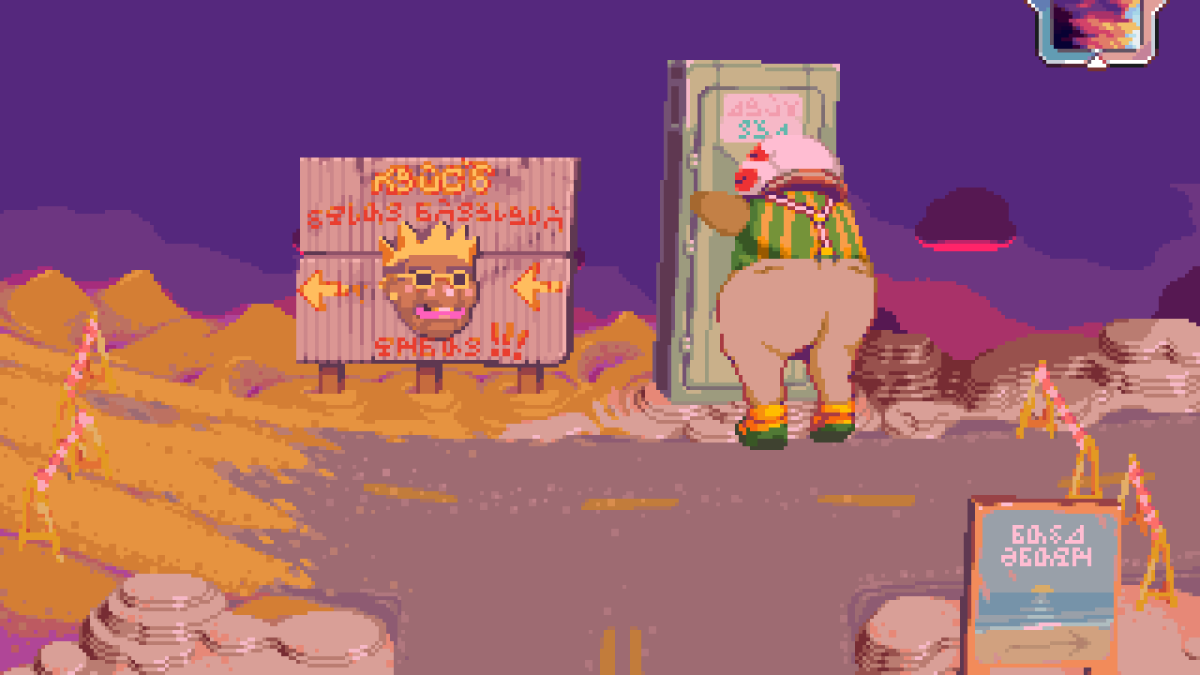 Above: Dropsy does not limit his hugs to living creatures.

Filler is not a bad word in Dropsy’s vocabulary. Discovering the ultimately lame story behind the circus fire can be a straight shot, uncovered in two to three hours, depending on the player’s skill with puzzles. But to run through Dropsy’s world with blinders is to essentially join the ranks of its numb townsfolk. Characters populate nearly every screen in the game, loudly complaining in the game’s picture-and-speech-bubble dialogue, of the one major problem in their life keeping them grumpy and anti-social, or at least anti-Dropsy.

Solving these mini-objectives (described during GamesBeat’s preview of the game as “hug missions”) requires just one or two interactions and a single item. Their simplicity, combined with the direct nature of the townspeople’s dilemmas, means it’s never a challenge to figure out what they need. At most times during my playthrough, I had half a dozen solutions in my head as I uncovered the item I needed to make an NPC I met two hours ago happy. It makes scouring each screen for items an amusement I willingly underwent, rather than the chore I have put up with in many other adventure games. More methods of getting each hug beyond “find item” or “activate nearby object” would have gone a long way, but the hunt never felt too dull.

Dropsy’s lack of dialogue and limited menus really help gel this notion of constant helpfulness. I looked forward to aiding these one-note caricatures out more than the most realistic, AAA-game side characters because doing so came about more holistically. Their needs were broadcast over their heads in a loop in the background of each scene, their distinct looks making it easy to distinguish them in my head. Diving into my inventory and retrieving their item was my reward for simply paying attention.

Not the most sophisticated pleasure, but Dropsy is a simple guy. 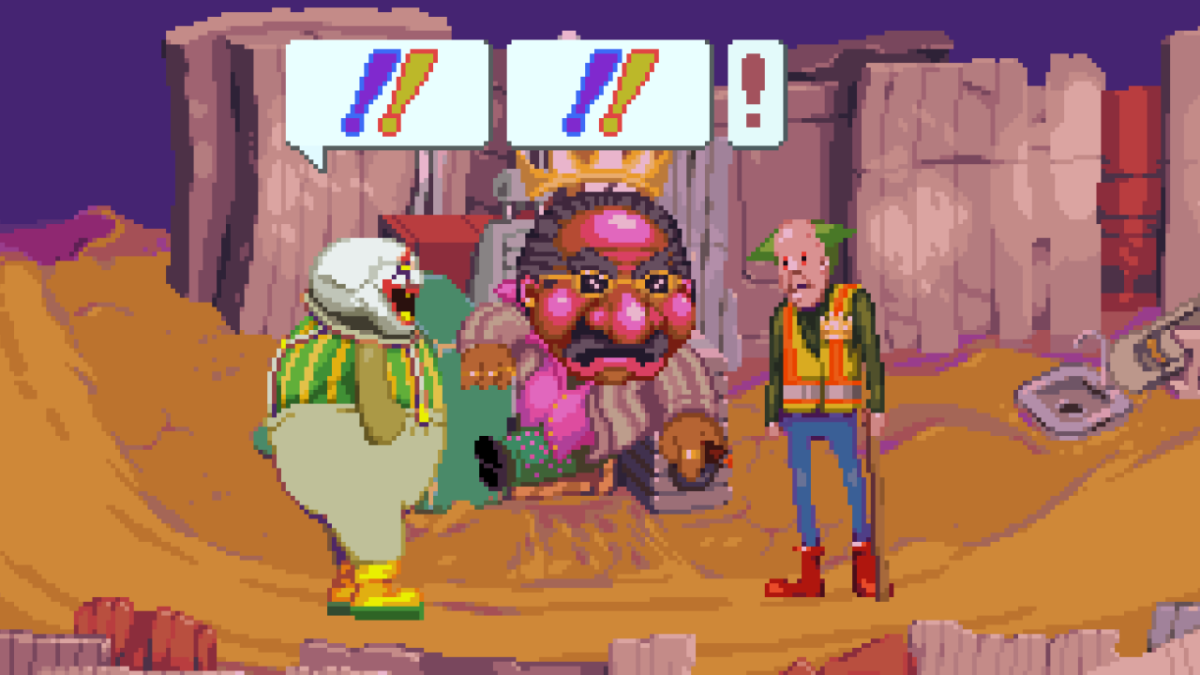 Above: The 1% of the time when Dropsy’s picture-book style doesn’t work is agonizing.

The problem with relegating all of your story to pictorial word balloons is that you need to be very specific. When you only have images to guide player behavior, it compounds the slightest confusion, sending you marching in the wrong direction for an hour. The vast majority of the time, Dropsy conveys instructions and puzzle requirements well in its universal, picture-book style. But when comprehension becomes muddy, as it did for me just a few times, it lead to some serious frustration.

Worse still, this game that has rather bluntly laid out the feelings of every microbe you’ve passed by up until a point will suddenly leave out the one clue you need to an essential puzzle. I found myself stuck only a few times during Dropsy, but each brought with it about a half-hour of mindlessly item-hunting and revisiting every screen of the game multiple times, exactly the kind of genre-inherited tedium the developers had vocally intended to avoid. That it usually excels (even if through childishly obvious means) at guiding player action makes its few lapses agonizing. 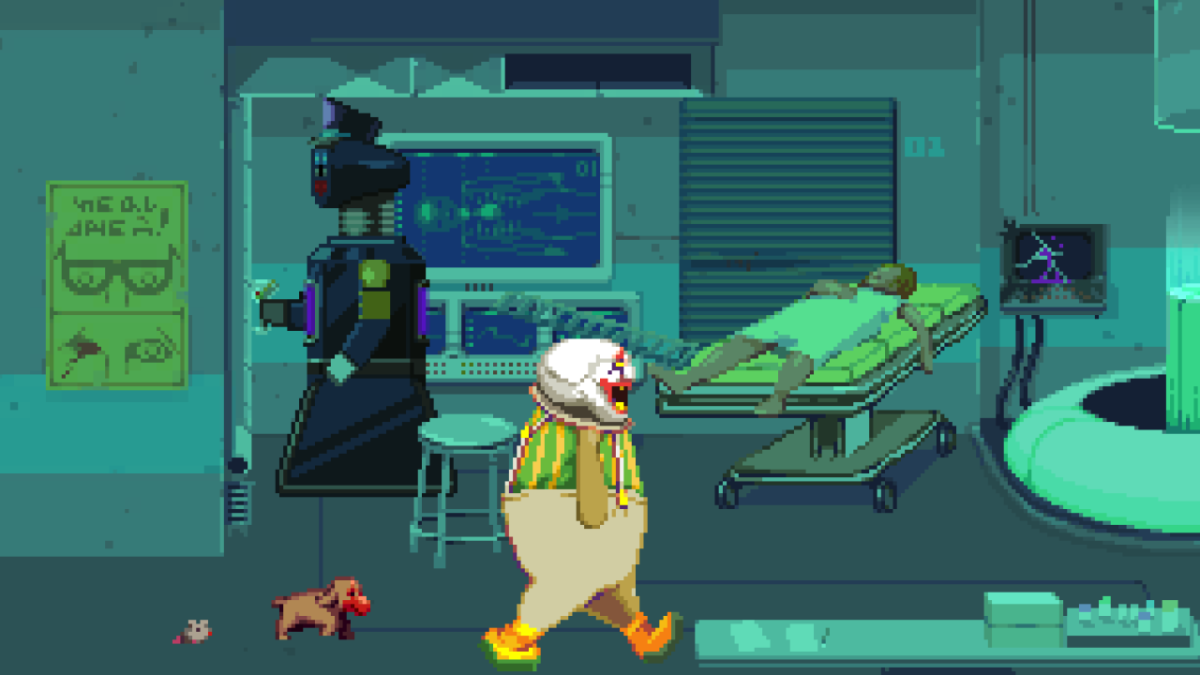 Above: The game’s soundtrack feels jammed-in at the last minute.

Rarely have I played a game more proud of its soundtrack than Dropsy. Not only is each of the game’s handful of songs on a constant loop in their respective screen or screens, but players can acquire most of it in-game as cassette tapes for your inventory. It would be a neat feature, if I didn’t already feel like the score had been constantly inflicted on me every moment before then.

The soundtrack itself isn’t bad, largely simple tunes that emphasize the game’s tonal mishmash rather well. But the reportedly dynamic soundtrack feels like a middle school crush awkwardly fumbling over his mixtape for the first time. Songs don’t blend into each other, one leaps into your headphones after an earlier tune stops abruptly, jarring any possibility of fluid transition. It doesn’t even a proper loop to individual tracks; a few seconds of silence just hang fat in the air between a song’s end and it starting back up. A simple flipping sound effect of a cassette tape would have covered this gap perfectly. As it is, the soundtrack constantly blurts out in the worst possible way.

Dropsy is a game that warmed my hardened, cynical heart. Like the titular clown himself, the game smashes an amiable joviality together with an unabashed dementia. Making people happy is such a rare goal in games, and to have one excel at the notion and the motivation for doing so is a doubly rare joy, although glaring missteps do keep it out of the center ring of adventure games.

Dropsy launches September 10 for PC, Mac, Linux, iOS, and Android. The publisher provided GamesBeat with a PC download code for the purpose of this review.