Today Apple wowed an auditorium packed with tech junkies, developers, and reporters with the announcement of its brand-new, freaking awesome Apple TV. And then it announced some other stuff. I don’t know. I blacked out after the TV.

Anyway, here’s what my colleagues tell me Apple announced today: 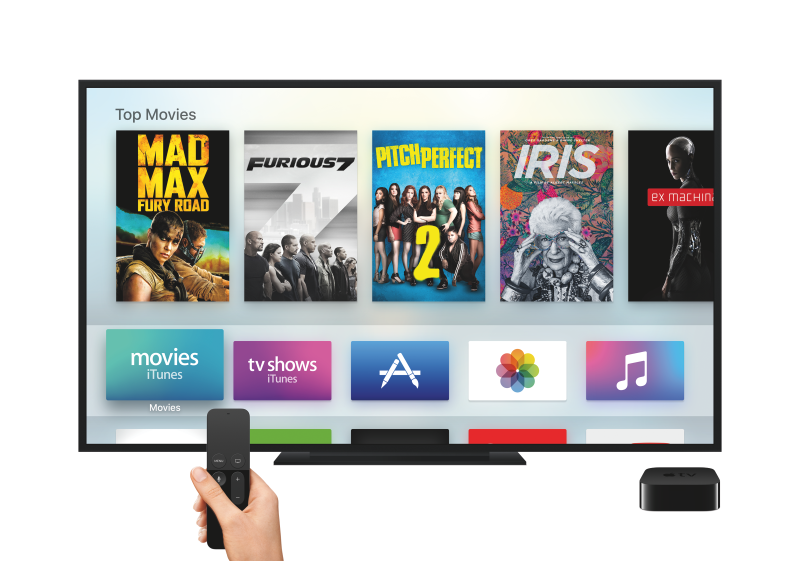 The biggest news of the day concerned the unveiling of Apple’s long-awaited new Apple TV. The new device features more storage and puts an emphasis on apps and voice navigation. That’s right, you’ll be able to ask Siri to serve up movies and make suggestions for what you should watch. More on that here. Above: Jennifer Folds asks a question while watching video in the redesigned Apple TV.

If you don’t feel like talking to your television, the new Apple TV also comes with a brand new remote control with a touch pad for navigating the Apple TV, as well as an accelerometer and gyroscope (likely for games and fitness-based apps). 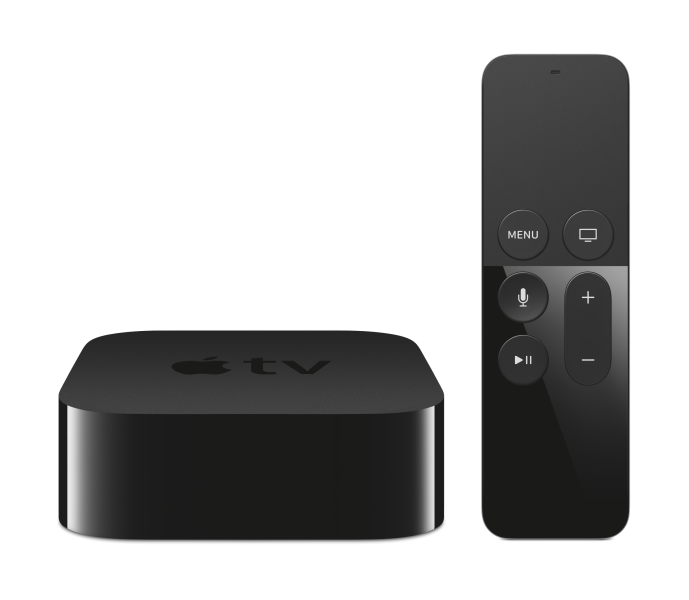 The new Apple TV comes in two sizes: 32GB for $149 and 64GB for $199. Based on demonstrations of the new device, it’s clear that Apple is appealing to gamers. Apple showed off the remote’s ability to perform well in motion-based games (like Beat Sports) as well other already popular mobile games that are being developed for Apple TV.

To bring in even more apps to the Apple TV network, Apple revealed tvOS — its operating system plus open SDK for developers. Early on during the event, Apple CEO Tim Cook postured that the future of television lies in apps.

“To deliver on this vision we need a new foundation for TV,” he said. That means more than just games. Users can access apps for iTunes Movies, iTunes Shows, and Apple Music in the latest Apple TV release. The existing device already features apps from the likes of Netflix, HBO, and Showtime, but the new Apple TV hopes to offer even more entertainment apps, some of which will be unique to Apple. For instance, a New York Times article revealed that entertainment network WME/IMG is working on an exclusive fashion series for Apple TV that will air this fall. Moving on, Apple showed off new tablets today, including a Pro version of its signature tablet. At 12.9 inches, the new tablet is larger than the preceding iPad Air 2, though at 1.57 lbs it weighs only slightly more. The iPad Pro comes equipped with Apple’s next generation processor, the A9, which Apple claims is 1.8 times faster than its predecessor.

Of course a professional tablet needs pro accessories. To satisfy the demand for a stylus, Apple revealed a pressure-sensitive stylus called the Apple Pencil. It also finally made an attachable keyboard for the iPad (one that looks a lot like the one on the Microsoft Surface). The pencil and keyboard will cost $79 and $169, respectively. 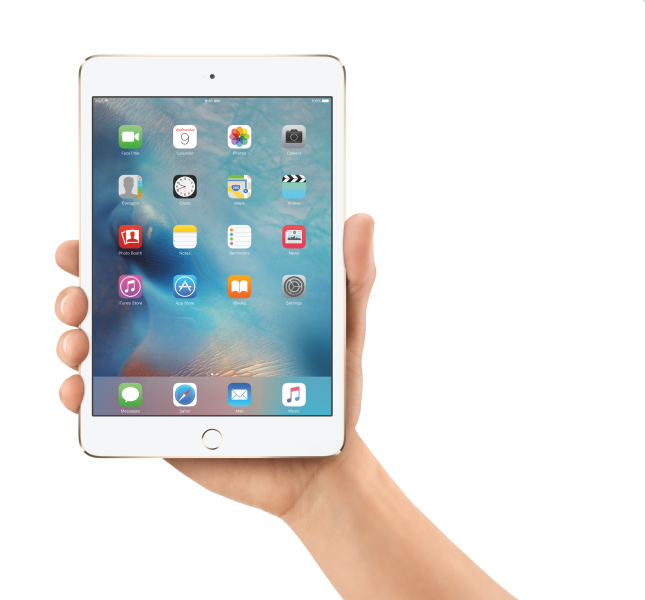 Apple also announced a smaller addition to its iPad family today with the iPad Mini 4. The Mini 4 is a scaled-down version of the iPad Air 2 and will cost $399.

iPhone 6s and 6s Plus Unsurprisingly, Apple announced two new iPhones: the 6s and the 6s Plus. To the delight of many, the new phone comes in pink. That’s not what Apple calls it, of course. No, the rouge-hued iPhone is “rose gold.” It just doesn’t resemble any rose-gold I’ve ever seen. At least not based on the company’s official photos.

Moving on, the new phones ship with better cameras and a technology called 3D Touch. The devices also feature Apple’s new A9 chip processor. The 6s and 6s Plus will hit stores in October. 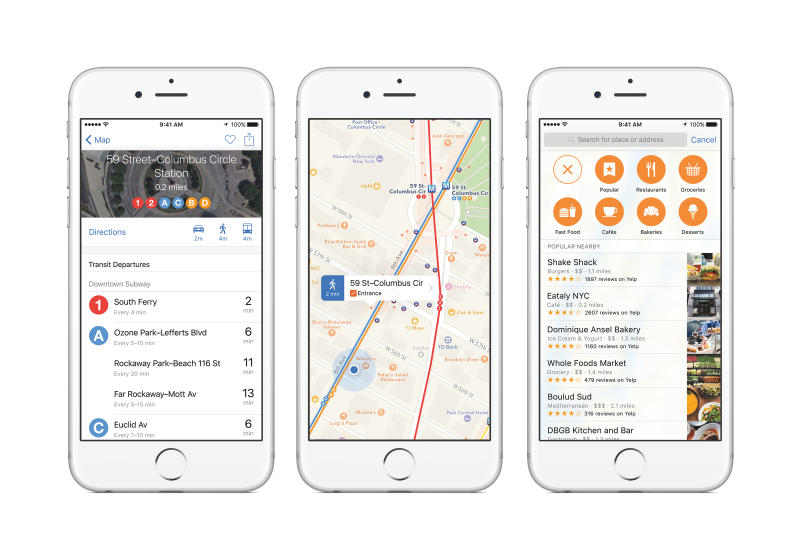 Along with the new iPads and iPhones comes Apple’s iOS 9, which was first announced in June. The updated operating system will officially debut next week on September 16.

iOS 9 has a bunch of new features like split screen, picture-in-picture, and the ability to open up a side panel app with a left-to-right swipe. Also expect a redesigned Notes app, support for transit in Maps, an all-new News app, and new capabilities in Apple Pay. 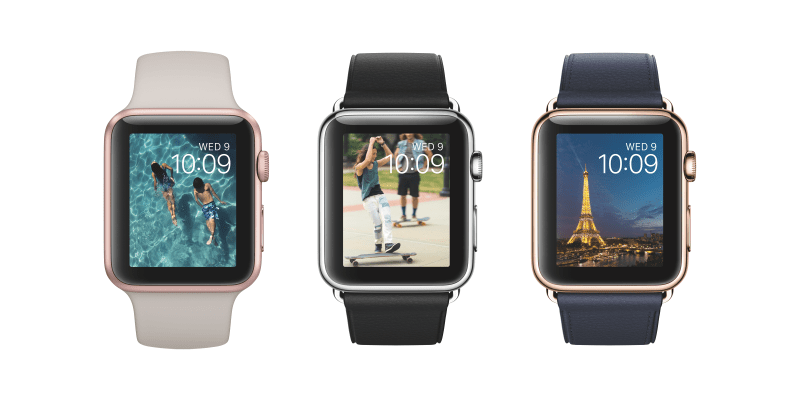 Also in software, Apple says the next generation of its Apple Watch operating system will roll out on September 16. Since launching this year, the Apple Watch has accrued 10,000 apps on its network. For comparison’s sake, that’s 6,000 more apps than Google has on its Android Wear platform. At the event, Apple previewed new big-name apps coming to its Watch App Store, including Facebook Messenger, iTranslate, AirStrip, and GoPro.

In addition to the apps, Apple’s Watch received some aesthetic improvements. Apple announced a “rose gold” (really pink) Watch as well as several new bands, including one designed by Hermès.