At long last, Siri is no longer confined to mobile devices and the Apple Watch. Now you can use Apple’s personal digital assistant with the redesigned Apple TV.

You can do more than just ask sarcastic questions and get sarcastic answers in this new implementation of Siri. Using speech recognition through the remote control for the Apple TV, you can search for videos available from multiple apps running on the set-top box.

You can ask natural-language questions to find the content you’re looking for, but you can also ask Siri certain questions while you’re watching video, too. Jennifer Folds from the Apple TV team showed how you can use Siri with the redesigned set-top box. 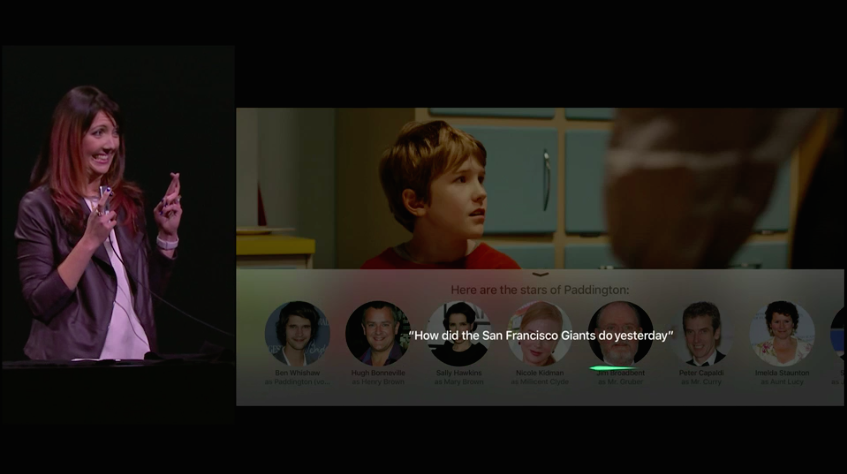 Above: Jennifer Folds asks a question while watching video in the redesigned Apple TV.

Here are some things she asked in today’s demo:

Above: Weather from Siri in Apple TV.

But Siri doesn’t let you control your connected devices by using Apple TV as a home automation hub, as some Apple observers expected.

Still, new capabilities do amount to substantial feature upgrades for the Apple TV, which first appeared in 2007.

Google and Microsoft have poured extensive resources into developing the underlying technology for speech recognition in the past several years. Both of those tech giants employ researchers who work on a type of artificial intelligence called deep learning, which involves training artificial neural networks on vast supplies of data — like recordings of people speaking — and then throwing new data at them in order to receive inferences.

Last year Apple was reported to be hiring people in this field. And earlier this week Reuters reported on a more concerted effort at Apple to hire AI researchers.

Above: The cast of Paddington, courtesy of Siri on Apple TV.

With more brains working hard to improve the technology, Siri should be getting more accurate over time. And as more people use Siri, Apple gets more training data to make the personal digital assistant smarter, too.

Not that Siri’s IQ score has been stagnant all this time. In June Apple senior vice president of software engineering Craig Federighi said Siri’s word error rate had gone down by 40 percent.

Now that intelligence is packaged up for consumers to use with Siri on Apple TV. The question is whether this will help Apple sell a lot more Apple TVs in the months and years to come.