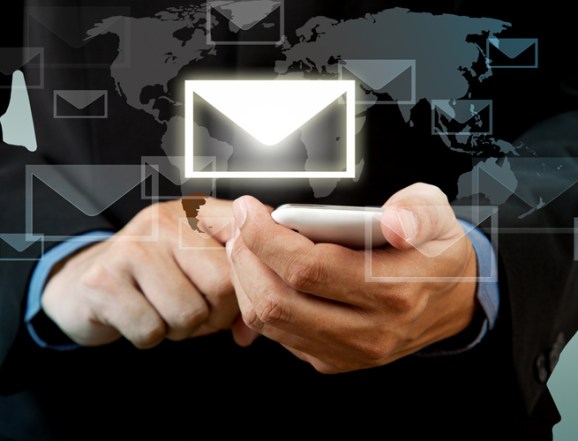 Your organization’s optimal route to mobile user acquisition, or UA, probably has something to with its current scale.

If you’re a large, well-established entity with a significant embedded customer base, email is likely your preferred route to acquiring users. On the other hand, if you’re a startup with limited funds and the need to scale quickly, organic social may be the way to go.

Using the recent VB Insight report Mobile User Acquisition: How top publishers get the best users for less money as a reference, here’s a look at these two high-performing mobile user acquisition methods.

Marketers have been using email marketing to acquire users for a long time, and there’s a good reason for that. It works. In order to have success acquiring mobile users via email, you’d best have a large universe of contacts with whom you have a trusted relationship. That’s something that takes a while to build, but the rewards can be tremendous.

In fact, the data shows that enterprises that mine their existing user base via email to convert mobile users enjoy high conversion rates and lifetime value, or LTV, about double the next best method, social. That’s one of the reasons why email is by far traditional marketers’ favorite mobile user acquisition strategy. 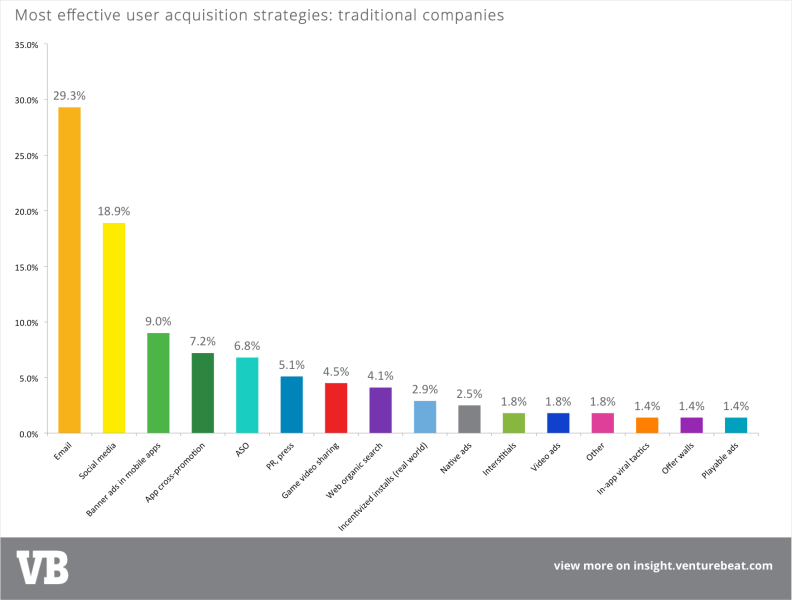 But success doesn’t seem to hinge on whether you’re a traditional or mobile-first publisher.

When asked, mobile-first publishers and developers also said that old-fashioned email works well (it tied for fourth place in their list of what works best, right alongside app store optimization, or ASO). That’s significant in that companies like Yozio, which help publishers maximize organic installs, say that organic accounts for well over 50 percent of downloads, and ASO is critical to organic installs.

Of course, there are those entities that are doing email-based mobile user acquisition well, and those who are getting poor returns or only low-value users out of it. As with any other method, discipline around A/B testing, analytics, and tracking is vital. Another key to success is an attribution and optimization platform that will help you fine-tune email campaigns for your specific market.

While email may be a great source of high-value users, organic social provides a huge volume of users — especially for mobile publishers that are early in their growth curve. In fact, organic social methods are mobile-first publishers’ top choice overall, outranking video ads, incentivized installs, email, and app store optimization. 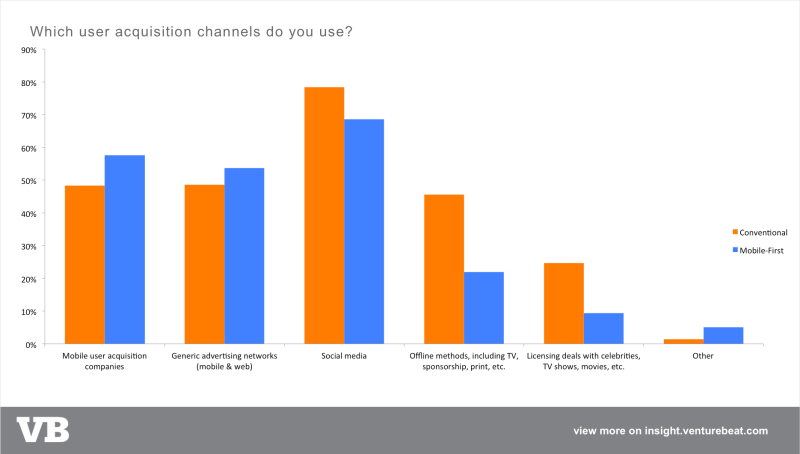 But the publishers that benefit most from organic social installs tend to be small. That makes sense, because when you’re small you likely have limited budget, and social is an attractive option because it tends to top out in utility for those still building out larger user bases, as compared to starting from a position of scale (startups usually don’t have their UA/LTV story down to a science).

Those mobile developers that do prioritize social tend to get medium-value users (between $15 and $49 LTV). So, while the dollars returned per user using social are appreciably lower than email, so is the cost of acquisition, and that often makes for a more palatable spreadsheet for startup marketers.

Keep in mind that there are no hard and fast rules as to the best mobile user acquisition method for your organization. The truth is that every successful mobile publisher VB surveyed is using 5 to 10 different tactics to acquire users, including app store optimization and good old-fashioned PR.

No matter your organization’s scale or budget, your mobile use acquisition strategy should employ a combination of these tools and tactics to maximize your mobile market reach and ROI.