Apple TV is becoming a bigger threat in the living room as it adds new gaming capabilities. But Nvidia hopes to position itself as a clear alternative with its Android-based Nvidia Shield set-top box and gaming console.

Apple unveiled its new Apple TV today at an event in San Francisco, and it demoed games on the TV using the new Siri Remote as a controller. Game companies such as Activision, Harmonix, and Hipster Whale demoed their games running on the new home entertainment box for the living room.

If Apple really puts its marketing muscle behind the new Apple TV, it could represent a big competitive threat. But Matt Wuebbling, general manager of Shield at Nvidia, believes there’s room in the market.

“We think this validates the category of the smart TV console that we pioneered,” Wuebbling said in an interview with GamesBeat.

Shield is a high-end box compared to the Apple TV, which uses an older Apple A8X processor. Shield has the new Tegra X1 processor in it, and it can stream high-end 4K games to your TV. It has cloud gaming based on Nvidia’s Grid infrastructure, and has a remote control with voice search. Android TV has 800 apps, and Nvidia said more than 135 games are on the Shield, with another 300-plus more that are compatible Google Play. On the Grid streaming service, the Shield can handle 57 games.

You can access apps on Nvidia’s own TegraZone app store for games, or get apps via Google Play. Shield has Google Chromecast built into it, and you can also play high-end games with PC-style 3D graphics on the Shield as well. And you can stream games from your PC to the Shield and to the TV as well.

But Wuebbling acknowledged that Apple is a marketing behemoth. Nvidia hasn’t disclosed how many Shield streaming boxes that it has sold . But I would guess there’s a good chance that Apple could outsell everything Nvidia has sold — in just a day. Apple is expected to launch the Apple TV for $150 to $200 in October. The Nvidia Shield sells for $200 and up..

“We are excited Apple has decided to launch in the same space,” Wuebbling said. “It confirms there is a need for it. It brings gaming and smart TV to the next billion people. From the Shield view, it’s a choice for the next-generation smart TV. When users go to the market, some will look for an operating system like Apple’s, and others will gravitate to Android. We are the Android player of choice.”

Wuebbling noted that Shield uses Wi-Fi for connecting its gamepad controller. Apple TV uses the Siri Remote, which has motion-sensing and voice control. But the Siri Remote seems to have pretty limited gaming applications, and Apple will make it possible to connect a game controller to Apple TV via Bluetooth 4.0 connections. The problem with that is that it may not work good enough for fast-action twitch applications, such as fighting games.

Nvidia notes there are more than 135 games in the curated Shield Hub app, which has games that work well on Shield in particular. There are anotehr 300-plus games accessible in the Google Play store, 57 games on Nvidia’s cloud-based Grid, and 800 apps on Android TV.

“I have used the Nvidia Shield since its release and it has been, by far, the best [game streaming device] on the market,” said Patrick Moorhead, analyst at Moor Insights & Strategy. “It offers 4K video services, plays games locally and via a game cloud, and comes with a real game controller. The new Apple TV is a huge improvement, but I don’t think they will appeal to the same crowd. The Android crowd will prefer the Shield and I think the Apple crowd will be driven to the Apple TV. The real question is, what does this do to Amazon and Roku. They’re the ones who lose out.” 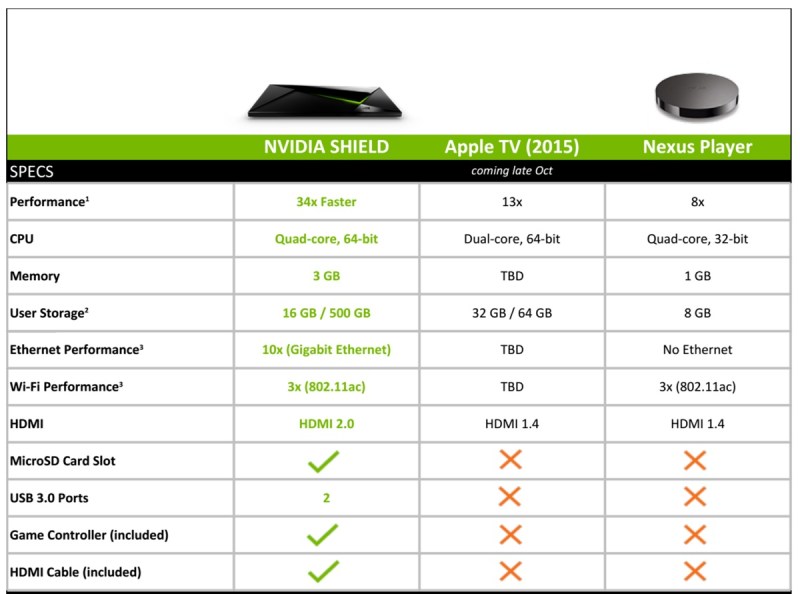