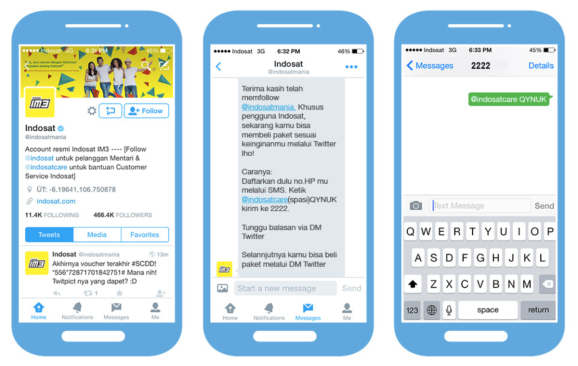 Twitter announced a new partnership Monday that allows the 68 million subscribers of Indosat, one of Indonesia’s largest carriers, to top up their phones through its direct messaging (DM) feature.

The company lifted the 140-character DM limit in June, seemingly paving the way for new business opportunities such as this.

Indonesia is an emerging market that the microblogging platform is known to have been eyeing. Last week, Twitter’s managing director for Southeast Asia, India, North Africa, and the Middle East, told The Wall Street Journal that the country of 250 million is “the next phase of our growth.”

Meanwhile, Prashant Gokarn, Indosat’s chief of digital, said in a statement that the carrier is the first in Asia-Pacific to ink such a deal with Twitter. But a Twitter spokesperson was unable to confirm whether this was, in fact, the first such partnership.

O2 launched TweetServe that provides features for users to retrieve credit balance or discount deal information (non-transactional base). You can check this video about O2 TweetServe. Another industry that utilised Twitter for their channel is from banking with Hashtag Banking. Another interesting use case of Twitter API is from Jet Airways to get lowest price info through Tweet.

“We’re excited to partner with Twitter… Indosat subscribers spend a lot of time on Twitter, one of the largest social media platforms in Indonesia, and they can now easily purchase our packages with a direct message,” Gokarn said. That includes data, voice, and SMS.

Thrilled to welcome @roysimangunsong as Business Head @TwitterID for next phase of growth in one of our top markets pic.twitter.com/eBfY269fMX

Twitter opened an Indonesia office in March, and just welcomed its new head of business for the country on Tuesday — that man, Roy Simangunsong, called Twitter the “social soundtrack to daily life in Indonesia.”

For now, an obvious bottleneck around the whole idea seems to be that users who are out of data and also away from Wi-Fi will need to resort to more traditional methods of topping up (i.e. by running a USSD code from the dial pad). In the end, they may just find the Twitter route more trouble than it’s worth. And we are all creatures of habit.

But if they’re at their desktop or laptop, for example, the convenience of Twitter is something that I could see as actually having more real-world use than a data-dry smartphone. It’s not immediately clear whether the platform will take a cut on packages bought through DMs.

“As Indonesia is one of the largest mobile and social media markets in the world, we are thrilled to partner with Indosat to use our social media platform to enhance their subscriber service and increase customer engagement,” said Arvinder Gujral, Twitter’s director of business development in Asia-Pacific.

“Twitter is an integral part of Indonesian society today, and #TwitBuy is another innovation to make our users’ lives easier and more convenient, while enjoying Indosat’s leading telecom services in Indonesia,” he added.

In any case, whether the method ends up being adopted by more than a very niche user base or not, it certainly makes for an interesting case study in one of Twitter’s most important emerging markets.