FiftyThree, the company behind popular drawing app Paper and a smart stylus called Pencil, has shaken off its iPad roots by finally launching its virtual Sketchpad app for iPhone.

The New York-based company has built a solid reputation in the digital creativity sphere since it was founded in 2011, primarily for Pencil and Paper, the latter of which Apple named as iPad’s App of the Year in 2012. Indeed, Apple has often shown affection for FiftyThree’s products, and Pencil was made available for purchase in Apple stores (online and retail) around the world earlier this year. 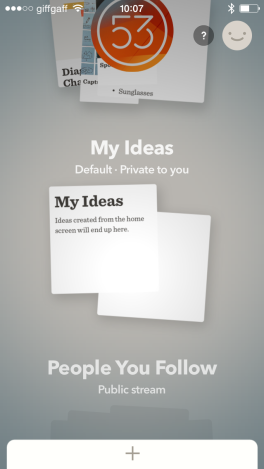 Above: Paper for iPhone

In a nutshell, Paper can be used to sketch pictures, scribble notes, highlight photos, and more — the stylus / app combo are designed to replicate anything you may have traditionally used a physical pen and paper for. Though in the case of the Paper app, you can also use your finger to write or draw, if you wish.

But Paper goes beyond the basics — back in May, the company introduced a new set of digital drawing tools to expedite the creation of charts, diagrams, and sketches. The so-called “Intention Engine” second-guesses what freehand sketchers are attempting to create, kind of like the technology behind predictive texting.

With at least one eye on the habits of smartphone users, the refreshed Paper app also now lets you capture images, notes, and sketches more easily, and users can now “tap” on an image to highlight a specific area, or write and draw atop it.

While Paper was always free to download, users traditionally had to pay for additional drawing tools, but in February FiftyThree made everything completely free.

This move marked a change in direction for the company, as it opted to focus on monetizing its $60 stylus instead, pushing that product into education and the enterprise. But at Apple’s big event yesterday,  the Cupertino company unveiled a new iPad Pro — and a new $99 stylus. While this does seemingly encroach on FiftyThree’s territory, the company played it cool, issuing this statement:

Every Pencil needs Paper. We’re excited to launch the all-new Paper on iPhone and iPad tomorrow, after which creative thinkers everywhere will see their phones and their ideas in a new light.

We believe pen-and-touch input is the foundation for a new type of productivity geared towards creative thinking.

Our and Apple’s products open up these tools to even more people, which we support. We at FiftyThree are excited to reveal where we think the next chapter of productivity is headed.

Of course, FiftyThree was never going to go out all guns blazin’ at Apple, given that they’re still “partners” and Apple is still selling FiftyThree’s own stylus (for now). But the fact that Apple has chosen to call its stylus “Pencil” too will surely cause confusion. And this could mean Apple eventually ejects FiftyThree’s incarnation from its stores.

FiftyThree’s decision to optimize Paper for iPhone users is indicative of the increasing size of Apple’s smartphones. What started with a 3.5-inch screen in 2007, progressed through the 4-inch barrier in 2012 with the iPhone 5, before hitting the giddy heights of 4.7-inches / 5.7-inches with the iPhone 6 / 6 Plus in 2014. In short, people are more likely to use their phone for sketching if the screen’s bigger, which may be why Paper is now available for iPhone.

Back in February, FiftyThree reported 13 million downloads to date which, when tallied against the number of iPads, meant that it had been installed on around 5 to 10 percent of all Apple tablets.

Seven months in, Paper has notched up another two million downloads, taking it past the 15 million mark. And now that it’s available for iPhone users too, this figure will surely go through the roof.