Daily fantasy sports have been growing exponentially in the last five years, largely thanks to two sites: FanDuel and DraftKings. In a Fortune report earlier this year, FanDuel had a valuation of $1.5 billion, and the Wall Street Journal reported that Disney (which owns ESPN) was investing some $250 million into competitor DraftKings for partnership with the so-called worldwide leader’s fantasy sports.

It’s a booming business, and it doesn’t appear to be slowing down. And if you’re already into fantasy sports, as I imagine you are if you’re reading this, it’s easy to create an account, join, and get in on some of the action with just a small deposit on these sites. So let’s look over some core tips that can help you create a (potentially great) fantasy football roster to bring into weekly leagues on game day.

DraftKings and FanDuel use what’s referred to as a “Salary Cap” format for their weekly fantasy football leagues. Players get an assigned value (the better the player, the higher the cost), and fantasy managers assemble a roster by staying under the cap. Depending your preference, the two sites use a different format and different caps for these rosters. You still get nine players per, but DraftKings allows a Flex spot in place of a kicker with a $50,000 cap; FanDuel includes a kicker and ditches the Flex with a $60,000 cap. So for example, if you’re on DraftKings you need to fill the following spots: 1 QB (quarterback), 2 RB (running backs), 3 WR (wide receivers), 1 TE (tight end), 1 FLEX (any offensive player), and 1 DST (defense/special teams).

Above: FanDuel’s lobby is crowded with events and leagues to enter.

Once you select a tournament to join in either FanDuel or DraftKings, you’ll see a list of players, positions, and their respective cost. As fun as it would be to compile a roster that includes the likes of Green Bay Packers QB Aaron Rodgers, New England Patriots TE Rob Gronkowski, and Atlanta Falcons WR Julio Jones (all stars), that’s just not a recipe for success. Those three players alone would eat up nearly $25,000 of your cap with six more spots to fill!

What you need to do is scan through these positions, examine matchup data to see which players have a positive opponent rank per position (DraftKings shows this information next to player names), and potentially take a flyer on a player who’s stepping in for an injured starter, or a cheap running back who could steal some goal-line touches, are all basic the keys to a successful roster. You can always come back to it later and tweak as necessary leading up to game day, but for now why not give it your best shot as we move on to the next step.

Do yourself a favor and get on social media and start following some of the foremost experts in fantasy football. Matthew Berry, Jamey Eisenberg, and Dave Richard are all good places to start for now. While they cast a wide net for fantasy football news and information, they do occasionally cover picks in relation to these Salary Cap leagues. Berry in particular has started to cover this league-type more often recently as it no doubt helps that his employer has an invested stake in DraftKings. Even if the information they discuss on their programs or columns may not directly align to weekly or daily fantasy leagues, it’s still advice that can translate to helping you put together a solid team on a budget. 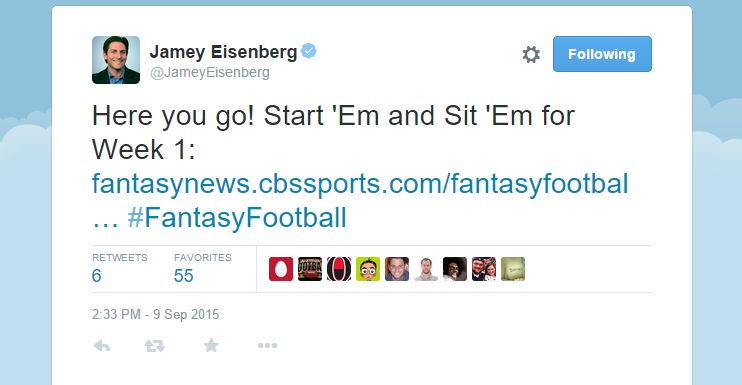 Above: Twitter is where a number of fantasy football experts hang out.

Take Eisenberg’s Fantasy Football Week 1 Start ‘Em and Sit ‘Em piece from this week. The “Start ‘Em Sit ‘Em” articles do a great job of bringing to light players that are typically not highly owned, giving fantasy owners a chance to grab someone who might have breakout potential that week due to matchup, opportunity, etc. You know what else is true about players with low ownership rate? They’re cheaper to roster on DraftKings and FanDuel.

Let’s get back to your roster. Now, until games start for your particular fantasy league, you can continue to adjust the roster as needed. If you find out Kansas City Chiefs RB Jamaal Charles pulled his hamstring in practice, it might be a good idea to slot his replacement on the Chiefs who should come pretty cheap, allowing you more money to throw around on the roster. Perhaps allowing enough cap space to upgrade Green Bay Packers WR Davante Adams to say, Julio Jones. 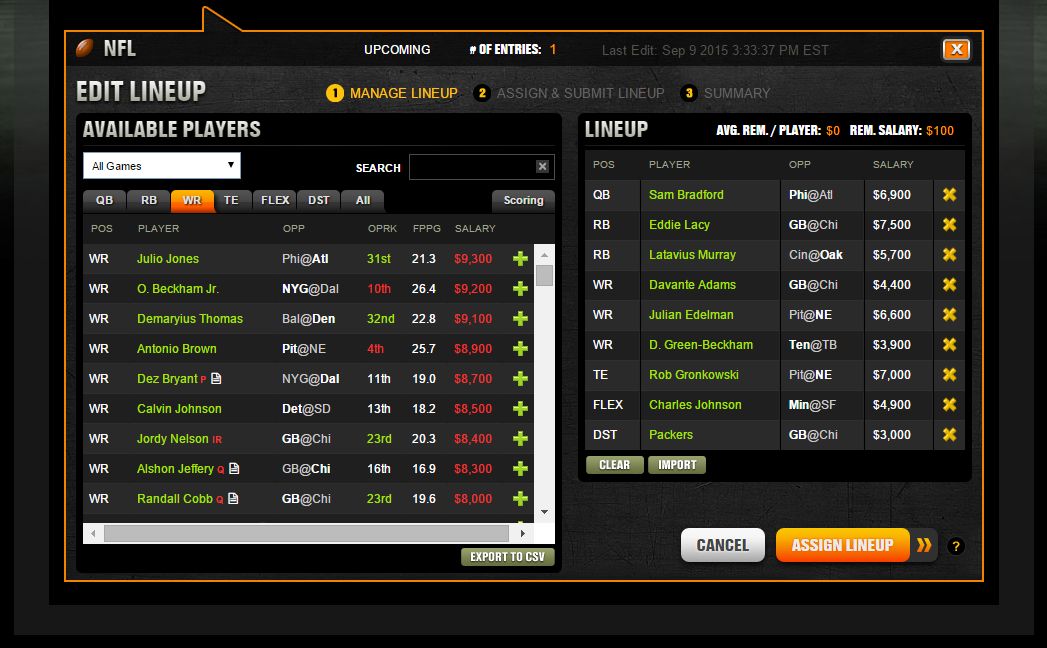 Above: Watch your budget as you set your salary.

Remember, football is an incredibly aggressive and violent sport, with injuries happening all the time. So it’s in your best interest to stay tuned in to team social media accounts as well as NFL insiders who will be the ones delivering breaking news. To help get you started, why not subscribe to my Fantasy Football Beats Twitter list that covers a variety of insiders across the NFL. If there’s breaking news about an injury, odds are good it’ll show up there first.

Step 4: Pay attention, and watch the scores come in

This is the best/worst part. Either you’re celebrating that the wide receiver you found for cheap is scoring multiple reception TDs, or the veteran player you invested $8,000 of your precious cap into just got carted off of the field. Football is a wonderful and unpredictable sport that, when coupled with the passionate fantasy community, can make game day have an entirely new meaning for those with a vested interest. 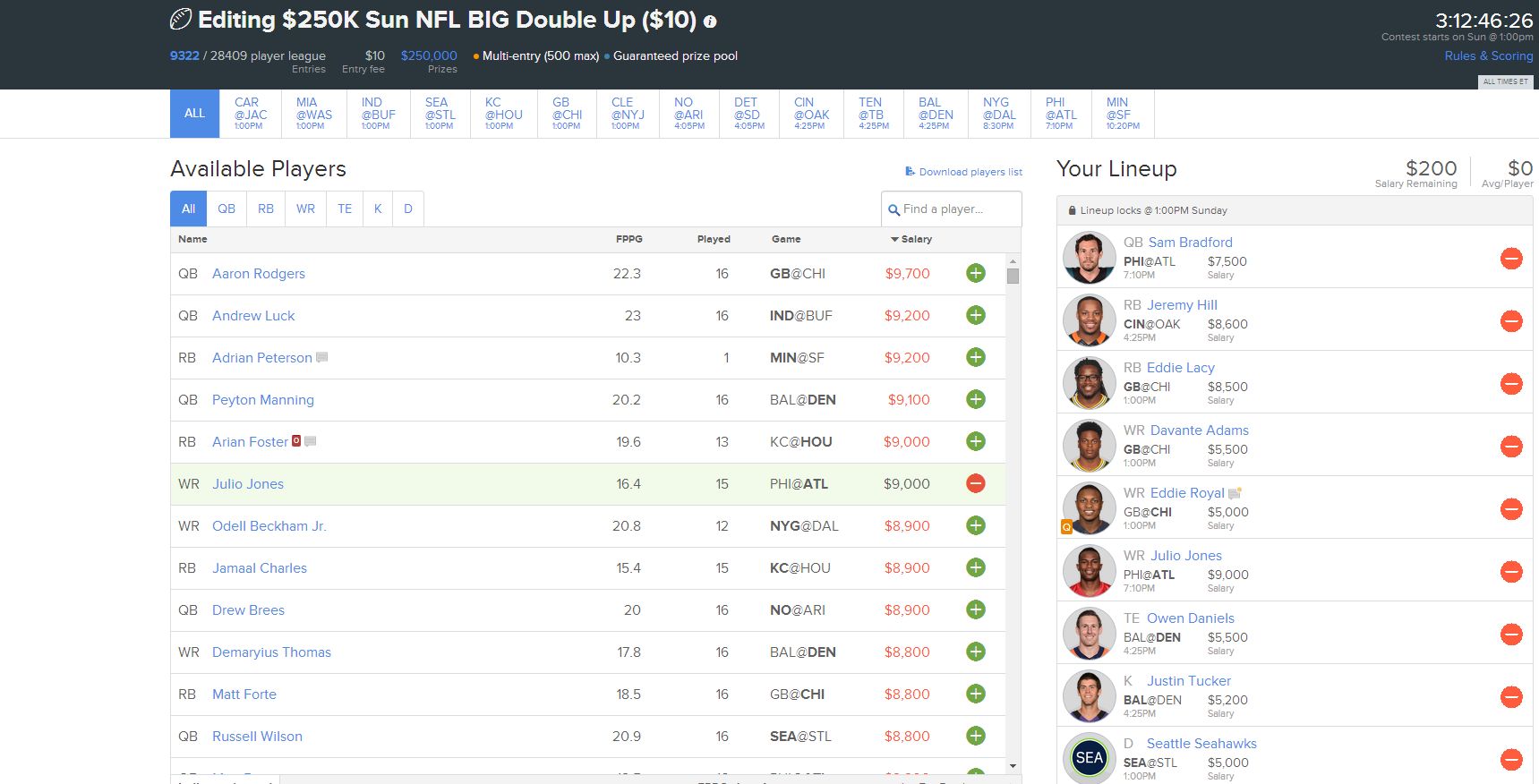 Above: Managing your lineups in daily fantasy isn’t that different from in other fantasy sports.

Just remember to pull your head out of your fantasy phone app every once and while and enjoy the game. You should be spending this time scouting who could be a great addition to your next weekly fantasy roster, or that a particular defense appears to not cover the run as much as you thought it would. In short: pay attention!

Step 5: Postmortem and prep for next week

Even with all of the invested time and energy, there’s no guarantee you are going to walk away a big winner after game day. So let’s say you lost. Didn’t even get into the black. Use this time to look over the winning roster’s team. Who did they slot in that gave them the edge? Use this time to learn from your enemy.

Once settled, it’s then time to start scouting into the coming week. Tune in and see who Berry is touting as a “Love” for Week 2. Has Eisenberg posted his “Sit ’em’s” yet? Start to make the rounds across the fantasy sports blogs I mentioned earlier, and then get around to the mixing and matching players for your roster. I think this is going to be the week. I can feel it.