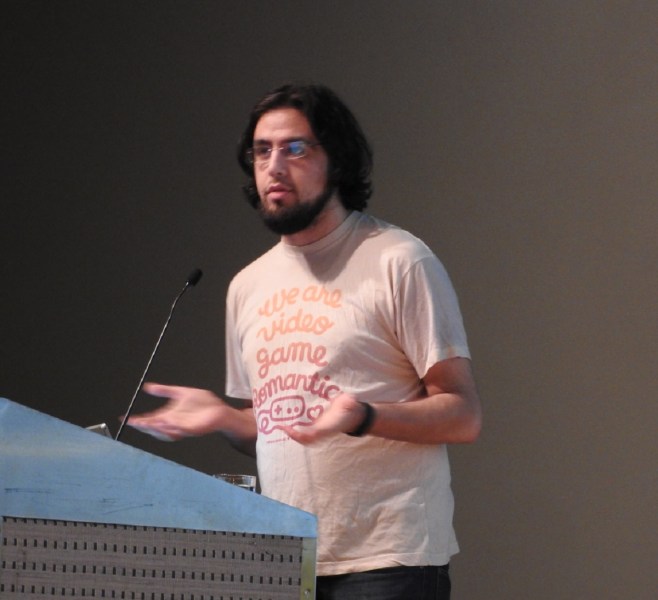 Above: Rami Ismail speaks at the IGDA Leadership Summit.

GamesBeat: What is the outlook you pick up from all the traveling you do? I was just reading an article about whether we’re going to have a triple-A and indie future, or whether there’s some sort of “indiepocalypse” coming.

Ismail: Here’s the strange thing. I think both of those are incorrect. What’s happening is, we used to have this niche, the mid-budget games. You’d have a Wipeout, and then you’d have the cheap knockoff called Killer Loop, and then you’d have another game that was the 2D version someone made in their bedroom. That middle section fell away because at some point, indie got really good at being indie. Triple-A was just too expensive to compete with. That entire segment, the ground caved away underneath it.

Indie has slowly been filling that up. That original niche is just getting filled again. Those niches never disappeared – they were always there – and the indie audience has been growing. But the number of games in that niche has been growing very rapidly as well. We might be a point where there’s too much stuff. Really, it’s always been the case that too much stuff is being made, but it’s more obvious now.

On the triple-A side you have the opposite problem. There’s almost not enough games being made for that audience, because making those games is so risky. The finances don’t add up. We’ve been making triple-A games for what, 20 or 30 years now? The budgets have been going up exponentially and the price of a game is still almost exactly the same. Probably cheaper if you correct for inflation, compared to 20 years ago.

That middle niche, what a lot of people call “double-A” or “triple-indie,” it’s underserved, because that segment of the market dropped out for a while. A lot of people are saying that’s where to go now. But the honest reality is, if that niche starts growing, in three or five years we’ll have the same situation there. Studios like us, like Capybara, we’ll have to figure out what to do with it. I don’t think anything is going to implode. It’ll just be harder to get started.

GamesBeat: I’d guess you’ve gotten plenty of business advice, people telling you to take your success and scale up.

Ismail: We’ve heard a lot of that. It’s terrifying. I think it’s a very poor idea. Partially because of who we are. If your company is sustainable and does well and has its thing—for me the challenge is seeing how far you can kick that. There will be a point where JW and I look at Vlambeer and say, “OK, we’ve done that. We’ve said what we want to say, made what we want to make, and now we’ll see what else is out there.”

Vlambeer as it is now has a relevance to the games industry and games in general. As long as that’s there, there’s room to explore. Scaling up is not an interest of mine. The additional responsibility would cripple Vlambeer’s ability to do the ridiculous stuff we’re doing. That’s core to Vlambeer, that we do ridiculous things.

GamesBeat: You had something to say about the Dutch government and its 10 million euros that it wanted to invest in games.

Ismail: It never happened. I don’t know if my article had anything to do with that.

GamesBeat: It creates a problem for those potential investors. Where do they put their money if they do want to support indies?

Ismail: That fund, to me, was kind of laughable. If you’re going to run an investment fund that’s supposed to attract investors, and the amount of money you’re getting is five million plus five million from the government, 10 million, that’s nothing. Is Supercell going to come to the Netherlands for a day and a half for that? What was the point?

You can look at smaller investments, but on that level the current infrastructure in the Netherlands is just terrible. Investing in the Netherlands, I can see how that’s not an idea a lot of people are excited about — because of the way the country is structured, because of the way the economy is structured. It’s a bad idea. I say that as a Dutch person. There’s a lot of room for improvement.

You see the industry trying to figure this out. You see initiatives like Fig trying to find a way to do that. For a lot of independents, I think investing in independents is a very strange idea. The indies aren’t ready for it. It’s not so much the investors that are the problem. It’s just that the business model most indies go after isn’t compatible with large-scale investment, the startup model, stuff like that.

There’s room for something. Fig proves that there’s a need and a demand for that. We’re just going to have to mess around a while and figure out what works. I don’t know if Fig is the solution. It’s an interesting experiment. We’ll see. I know there’s a lot of interest from investors in indie games, because I’m constantly getting proposals from investors. There’s a future there. We just have to figure it out.

GamesBeat: You talked about that responsibility you feel as a leader. When people come and ask you for advice, what do you say?

Ismail: If they ask me how to get in the games industry, the answer is the most simple answer you can think of. Make games. Depending on the person and their situation, I try to see if there’s more I can say that will help them or steer them in a certain direction, but it’s a similar response to when I go to emerging territories, places where the industry is just taking hold. I’m careful not to steer. If I do, I’m going to turn an entire community that would culturally grow in a specific direction into another direction. That can be dangerous.

Very often the way a company is structured reflects the culture they’re in and the way business works in those countries. You have to be careful with that. Usually when people ask me questions like that, I need something more specific, a more specific explanation of what they want. The situation in, say, Uruguay is very different from the situation in Finland or Egypt or Lebanon.

Ismail: –is a terrible idea! I’m so happy they basically shouted at me that I’d just fucked up. I’d never thought about it that way. But realizing that my words have the power to make somebody drop out of school and throw away a chance at a good life—That’s terrifying. I never thought about that, and you have to. You have to take responsibility. 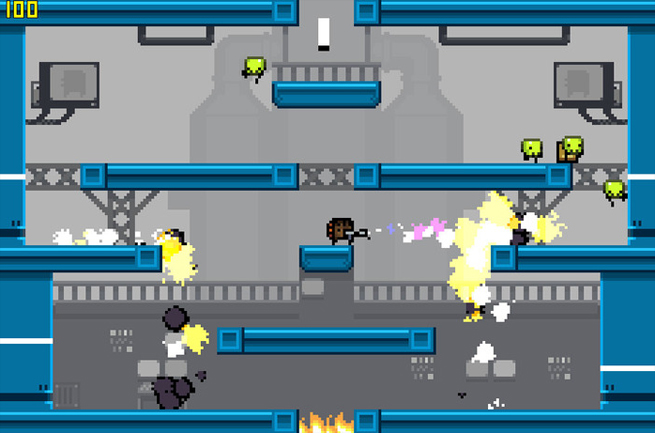 GamesBeat: To be able to tell that story is a reminder.

If you’re going full indie, there’s never been a lot money in indie. You can’t compete with most of the double-As, with Sony and Microsoft and Steam going after indies. All those systems are built for indies the size of Vlambeer and up. In that double-A space, it’s a graphics race, a production value race. A lot of indies can’t sustain that without a good niche. If you’re not already there, the jump from starting to getting there is practically impossible. Triple-A is just a mess. It’s all bad.