Setting prices and running a virtual economy is complicated. But most game developers don’t have degrees in economics. Scientific Revenue wants to offload the task of dynamically pricing virtual currency in mobile games.

The result is a new expert source for dynamic pricing decisions that can make a significant difference in the money generated from the same base of players, said Bill Grosso, the chief executive of Scientific Revenue. His company tweaks prices and maximizes revenue for companies, and that’s crucial because many companies are having a tougher time surviving because user acquisition costs are rising steeply for free-to-play games.

Grosso said the revenue lift can be as much as 20 percent to 40 percent, depending on the game. Scientific Revenue gets a cut, but only if it moves the revenue needle more than 10 percent. As growth in the $30 billion mobile gaming market slows down to more mature rates, that kind of uplift is a big deal. A study by the Harvard Business School said that a 2 percent change in prices can lead to 10 percent more revenue.

As an example, many companies have a virtual currency that they sell for real money. That currency can buy a wide variety of goods in a free-to-play game. If a player has a history of spending a lot of money in games, you might want to offer them a $100 bundle for a lot of currency at a discounted price. But if a player is new or hasn’t spent much before, you might want to show them an offer of a $5 bundle.

In this case, both players could be paying vastly different amounts per unit of virtual currency, just as airline ticket buyers might be paying different amounts for the seats on a given flight. Business travelers, for instance, will pay a lot of money for last-minute seats with a lot of flexibility for cancellation.

Airline pricing isn’t a precise model for virtual currency pricing, but it shows that it can make sense to be smart about tailoring prices to different customers, based on who they are and their capability or willingness to pay. By contrast to airlines, game companies have different economics since their virtual goods carry zero additional cost to make more of them. They don’t expire, and can be instantly created. Yet you don’t want to flood your game world with virtual goods and cause deflation.

This makes sense in the world that has emerged. The game industry relies on real-time exchanges that bid on user acquisition. Attribution companies tell game companies where the users came from. Analytics providers do deep segmentation and predictions. Game developers have to optimize user acquisition, improve engagement, and prevent user churn. 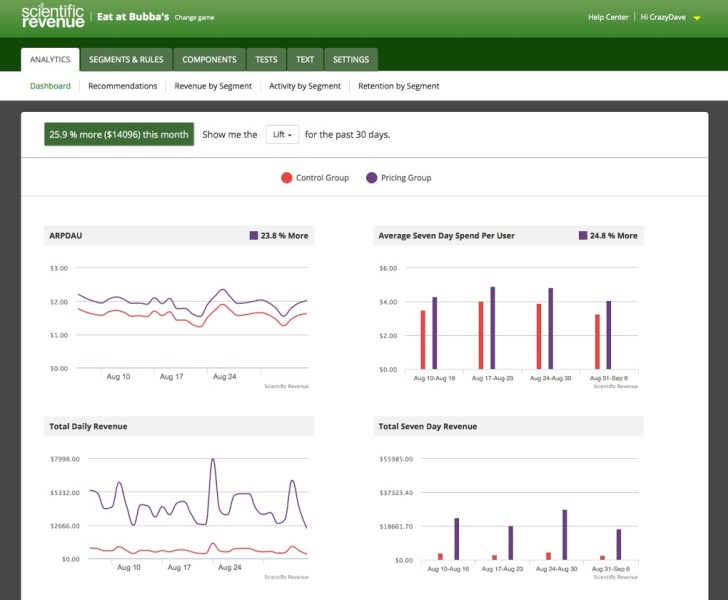 “People were very recently focused on ad monetization,” Grosso said. “It’s only with the rise of cost-per-install (CPI), or user acquisition costs, that it has become very painful. People are now focusing on revenue optimization as an idea. When we started this in 2012, we were ahead of the curve. When I mentioned it to people in 2013, not many people said that they needed it immediately. Now the battle for users and eyeballs is more expensive.”

Geographic pricing is one of the company’s specialties. In India, for instance, players are more price-sensitive. Game companies should sell virtual goods for lower prices in that market, compared to other territories.

“If you don’t price correctly, you don’t have access to a market of 1.3 billion people in India,” Grosso said. “A good side effect is retention. You have someone who now spends in a game, and they hang around longer. It’s not about raising prices to gouge people, but lowering prices because they have less disposable income.”

It’s also worth noting that people with high-end Samsung phones are much more willing to spend than people who are using less-expensive Indian phones.

Grosso’s team of 15 people — including two economists — has put together a cloud-based infrastructure that provides personalized, profit-maximizing prices for a company’s users. It handles complex functions such as player behavior data mining, data analysis, and real-time segmentation and per-user pricing so that developers don’t have to do it.

At his previous job, Grosso was the chief technology officer at Live Gamer, which did payment processing in free-to-play games. In watching companies launch on Live Gamer, Grosso believed that most weren’t doing their pricing right.

He left the company, and while on a vacation, he cooked up the idea for Scientific Revenue in 2012. Chris Carvalho, the former chief operating officer at Kabam, is on the company’s advisory board, and former Sony Computer Entertainment America president and CEO Jack Tretton is also on its board. Scientific Revenue raised a seed round in February 2014.

Rivals include New York-based Gondola. Grosso’s team is focused on mobile, as that’s the market where it wants to win first.