When it comes to ambition, you can’t get much bigger than ChronoBlade. The inaugural free-to-play mobile title from San Francisco developer nWay is expected to debut early next year, and it will be the latest test of whether hardcore games will begin to take a big chunk of the revenues in the $30 billion mobile game market.

ChronoBlade is a fast-action fighting game that will have high-end 3D graphics and a speed of 60 frames-per-second — the equivalent of console games. But it’s going to run on mobile devices with touchscreens or controllers. And it’s coming to the U.S. mobile gaming market early next year.

nWay has a very interesting pedigree, with a number of its employees hailing from Realtime Worlds, creator of the massively multiplayer crime game APB.

Taehoon Kim is the chief executive and cofounder. He cofounded Pixelberry and Nurien Software. The latter had raised $25 million in Silicon Valley venture capital to create an ultimately unsuccessful 3D social platform for online gamers.

Kim’s efforts are always gargantuan in scope. Kim has more than 80 employees, and he has raised $20 million from investors such as Translink Capital, Lightspeed Venture Partners, and Baseline Ventures to build out a title that is continuously updated.

Tony Harman, president and cofounder, worked on titles such as APB and Crackdown at Realtime Worlds. He also was a longtime Nintendo development director and was a leader at DMA Design, which became Rockstar North. David Jones, a gaming pioneer from DMA Design and a co-creator of Grand Theft Auto, is nWay’s creative director. They are joined by Stieg Hedlund, vice president of creative and a former Blizzard game designer on titles such as StarCraft and Diablo. They started working on ChronoBlade three years ago. 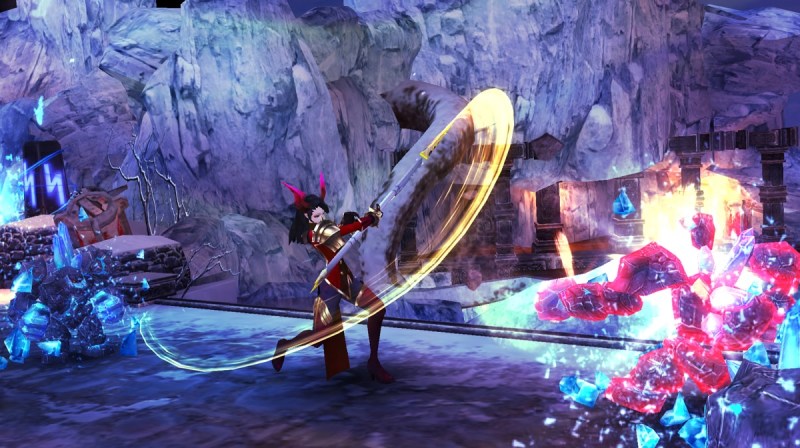 Above: nWay has both 2D side-scrolling and 3D gameplay.

“The question is what is going to happen with the next-generation mobile devices,” Harman said in an interview with GamesBeat. “We thought the market is going to go very quickly from casual to mid-core to hardcore. We wanted to be ready when the hardcore doors opened because that’s where our expertise is.”

Hedlund said, “When we started, a lot of people thought we were crazy. We’re building a 3D, side-scrolling, beat-em-up RPG. We wanted minute-to-minute gameplay, with arcade quality experiences, and an RPG with a lot of depth to explore. ”

Hedlund added, “I’ve been working in games for nearly 30 years. I’ve been waiting for mobile to go hardcore.”

Kim said that his company wanted to create a game that had a lot of precise control of characters. ChronoBlade has role-playing game elements, with persistent online features, as well as synchronous multiplayer where one player can take on another simultaneously in real-time.

“When we got started, there was nothing like this on mobile, so we had to create the technology from scratch,” Kim said.

nWay has applied for patents on inventions related to getting the game to run at 60 frames per second, Hedlund said. It licensed the Unity Technologies’ source code and added a lot of custom work to deliver a fast arcade-style feel. The touchscreen has buttons that you can tap with various combinations that add a lot of depth to the fighting. You can also play the game with Bluetooth-based gamepad controllers.

“We think we did this in a novel way,” Hedlund said. “It was an incredibly difficult task to make the game so fast.” 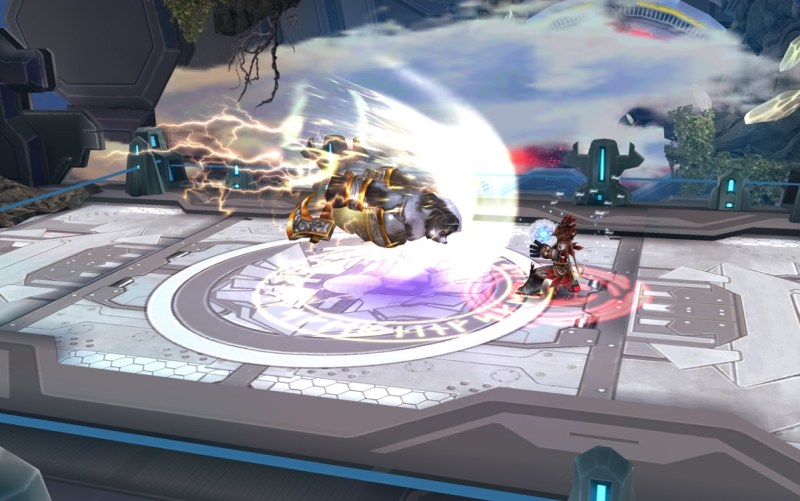 The title will be published by publisher Netease in China soon, and it will come out in the U.S early next year. It will be continuously updated over time. Right now, the game has a level cap of 60, five chapters of single-player play, 270 rooms, player-versus-player tournaments, challenges, and 2,000 in-game items for character customization.

“We have a ton of content,” Harman said. “It will take a while to see the end of it.”

Harman said the company will be able to move the title to different platforms, since it is built with Unity. Over time, devices have gotten bigger and better able to run the game.

“One thing that helped us a lot is that the screens of mobile devices have gotten bigger,” Kim said.