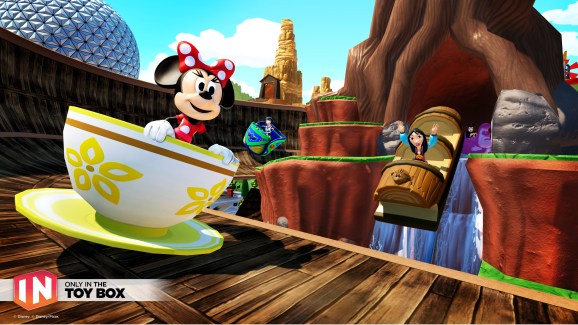 Disney Infinity 3.0’s adventure mode is unlikely to offer value for money on its own. It’s the toy box game creator where the fun really begins. Start your game creation journey here and now.

Although many focus on the play set adventures, it’s actually the Toy Box (dating back to 2010’s Toy Story 3) that sparked Disney’s toys-to-life project. It’s here that players now have free reign not only to create their own adventures but also combine any franchise and character.

Getting to grips with the Toy Box does take a little time and some patience, but it’s essential. Here’s how to do it. 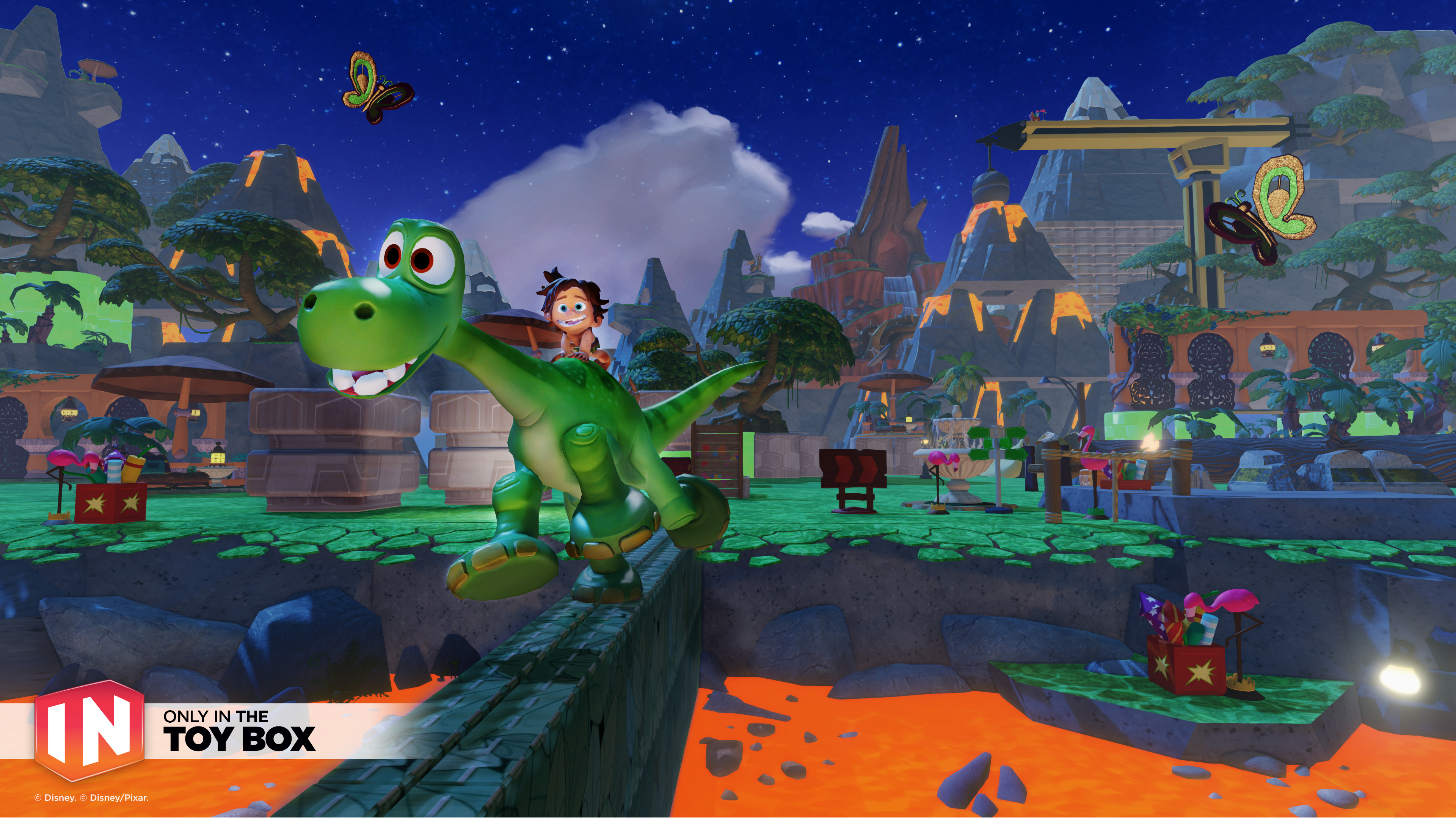 Above: The Good Dinosaur is already in Toy Box.

You can access Toy Box in a variety of ways, if you have any version of Disney Infinity in your shelf you already own it. It has improved each year, to access the latest 3.0 version there are a few options.

If you have purchased any version of Disney Infinity 3.0 starter pack, the Toy Box mode is included. If you don’t already have a new starter pack, a few cheaper alternatives are available.

On PC, iOS, (and soon on TV OS) a free download can get you started. This version usually lags behind the console Toy Box but still offers all the basic features — currently PC and iOS are on 2.0 while console is on 3.0.

On consoles, you need to buy the game, unless you are on Wii U, where the 1.0 version is available for free and just needs the purchase of an Infinity Base peripheral. Otherwise, the choice is a Starter Pack or download of the game on PlayStation 4 or PS3, Xbox One or Xbox 360, or Wii U.

Here again, if you are unsure about investing heavily, you can purchase an older version of Disney Infinity for much less to try the Toy Box out. The older versions have fewer helper features than more recent iterations, but the basics are the same. Old creations can leap forward to the newer game when you upgrade. 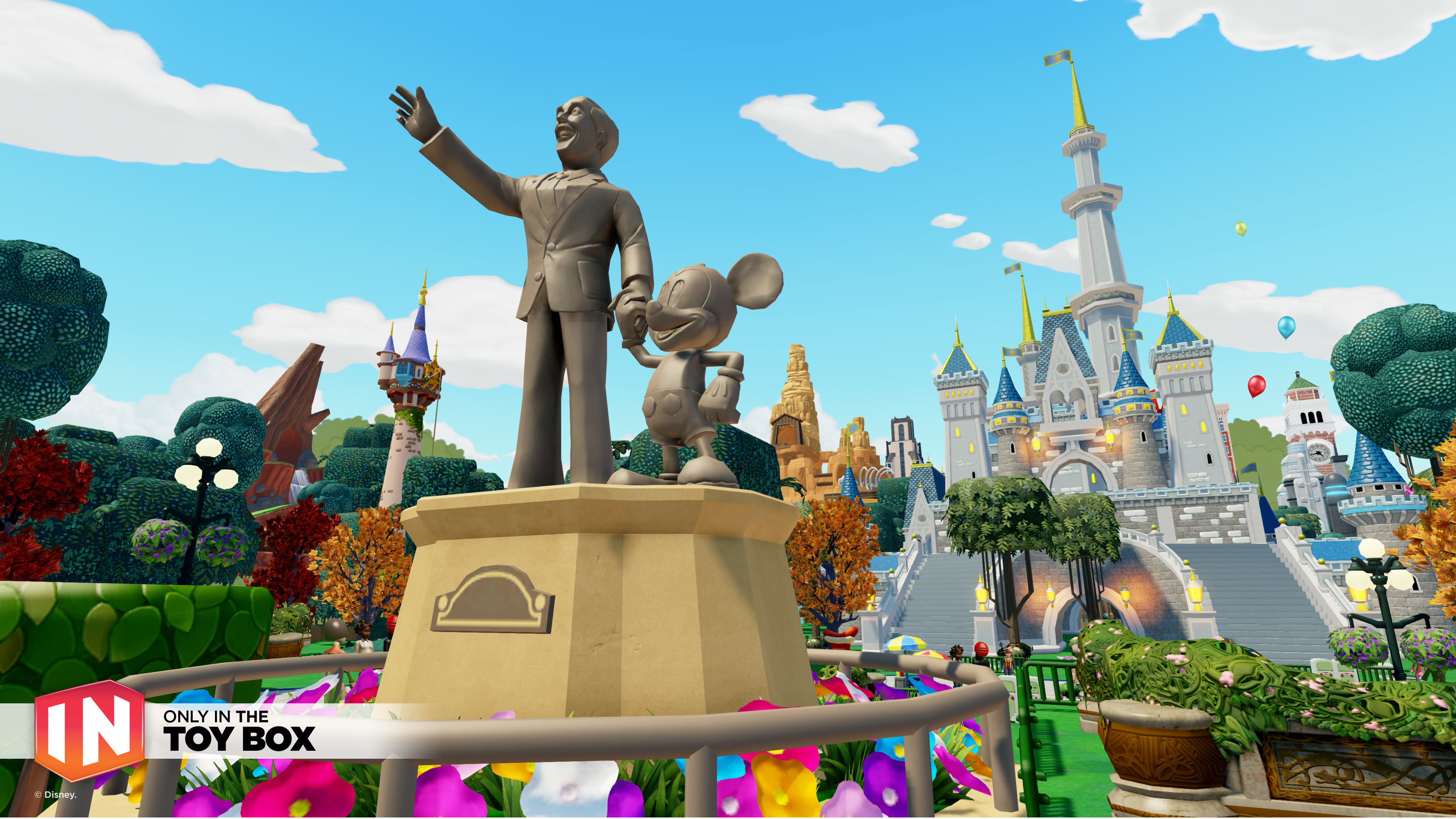 Above: The man himself can greet players in the Toy Box.

The toy box is the part of Disney Infinity where you can mix and match any characters. The play-set adventures limit characters to a particular universe with the toy box stand alone games sit somewhere in-between the two. This means you can use any Disney Infinity character in these games, old and new, and again find some bargains second hand.

To start, select Toy Box Hub from the main menu and access the tutorial area. It’s worth spending some time here working through the different tasks as this introduces the basics of the toy box functions in a systematic and playful way.

Not all the toy box items are unlocked at the beginning, only a small fraction. Some items will be made available as you complete the play set adventures and toy box tutorials. Other items can be purchased as required.

The tutorial revolves around the central fountain zone where you have colored pads to select and a set of host characters. Again it’s worth talking to each character in turn to get a feel for what’s on offer here.

On Main Street U.S.A. the El Capitan Theater enables you to see what other people have created. Flynn’s Arcade offers online multiplayer challenges. The Sidekick zone introduces how the in-game helpers can assist you.

Once you have worked through these basics, unlocked more items and have a good feel of the basics you are ready to create your first toy box world. 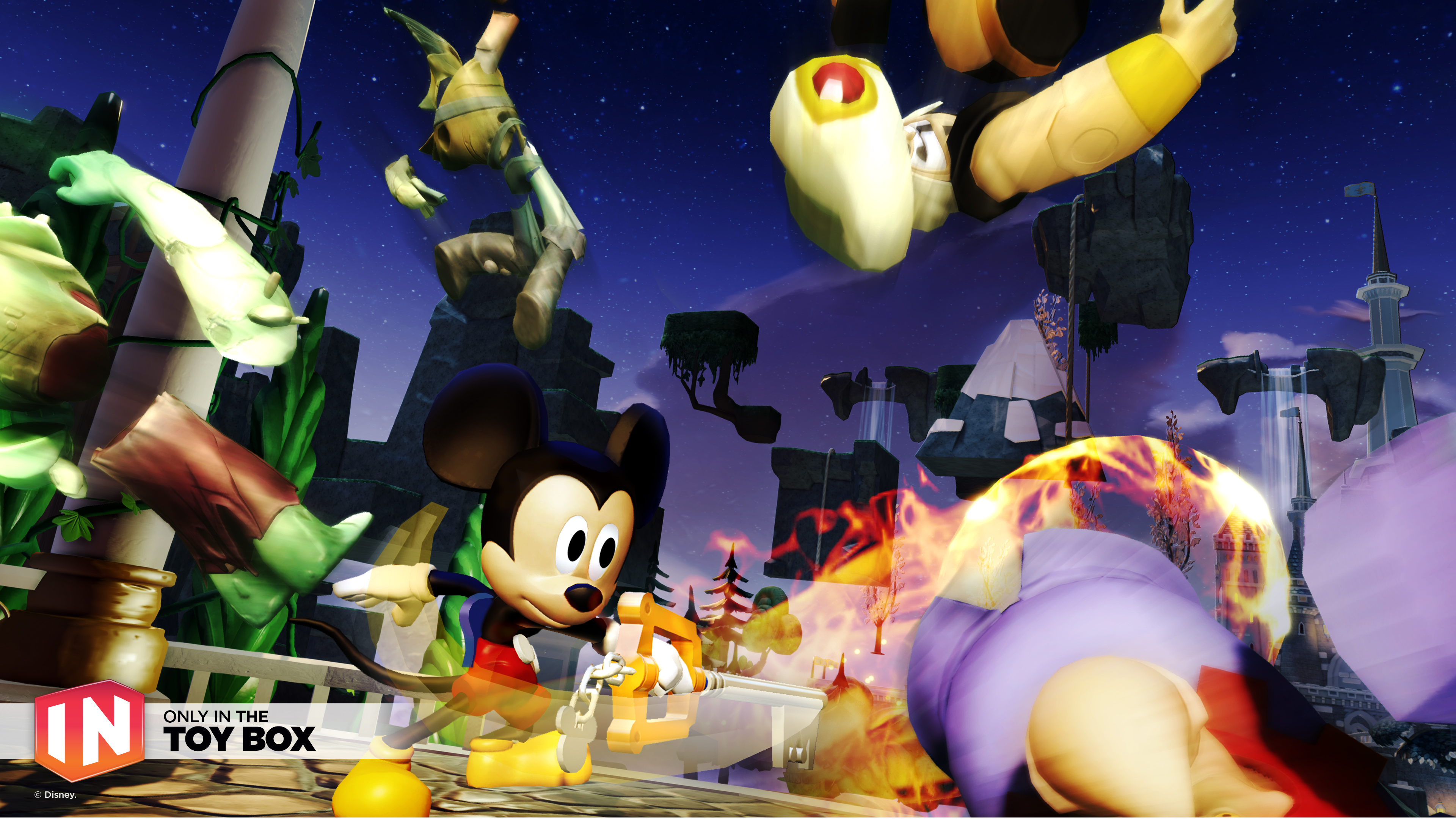 Above: Even the Kingdom Hearts’ Keyblade makes an appearance in the Toy Box.

The basic process of creating a toy box is the same each time, although the resulting games will differ greatly. It’s important to keep things tidy and work systematically, particularly for more complex creations. Planning things out in advance on paper can also help.

In the Toy Box menu select New Terrain Toy Box, this gets the game to generate a starting world for you rather than doing this by hand.

To populate this terrain with features you need to pull up the Editor menu. This is accessed differently on each platform. On PlayStation 4 you click down the touchpad, while on Xbox One you press the option button.

This displays a palette of the items available to you. These are grouped into different categories determined by their appearance and function in the game.

Select an item to place it individually, or use one of the toy box Helper characters to build something for you. This generates a wide range of interactive structures — castles, treehouses and the like. They can take a while to get started so if you don’t see any result straight away just give them a minute or two while you carry on with other elements of your creation.

Alongside the helpers you can use the Builders and Creators section to add in larger generated features such as towns, castles and racetracks. Here you select the required feature and mark out an area in the world by dragging the blue cordon.

In the Editor mode you can then go in and select an item to adjust its position and dimensions. Alternatively you can get a player’s eye view of the world by selecting the Spark Mode — pressing left on the D-Pad — to fine tune the experience. Using the magic want you can get more fine tune control of the created items as well as see how they will work for a player.

With the basic toy box world complete you can now add special items that create interactivity. This can be as simple as placing the Sky Changer toy from the Instant Fun set that lets players flip through different visual themes for the sky. Or it can be a more complex Creativi-toy item.

The Trigger Area creativi-toy item for instance enables things to happen when the player enters a certain location in the world. This requires the first steps of actually programming your world.

With the Wand control selected Creativi-toys can have connections made to other interactive elements. Making a connection between the Trigger Area to the Sky Changer you can make the environment theme change when the player enters a certain area.

This basic premise opens the door to all manner of interactions and dramatic effects. As more Creativi-toys are unlocked the options grow exponentially. Using Creativi-toys and other objects you can create classic game modes as diverse as fetch quests, races, battles and even sports games.

In this year’s version of the toy box new options have been added to extend this further – new active triggers, dynamic paths for objects, music and sound effects. You can even use Activi-toy doors to connect different toy box worlds together for multi-location adventures with interior and exterior spaces.

The level of complexity and options can be a little bewildering at first and it is worth taking on guidance from a variety of sources. In addition to the in-game tutorials there are a wide range of resources available online but none better or more comprehensive than the series of Tips and Tricks on Disney’s own Infinity channel: 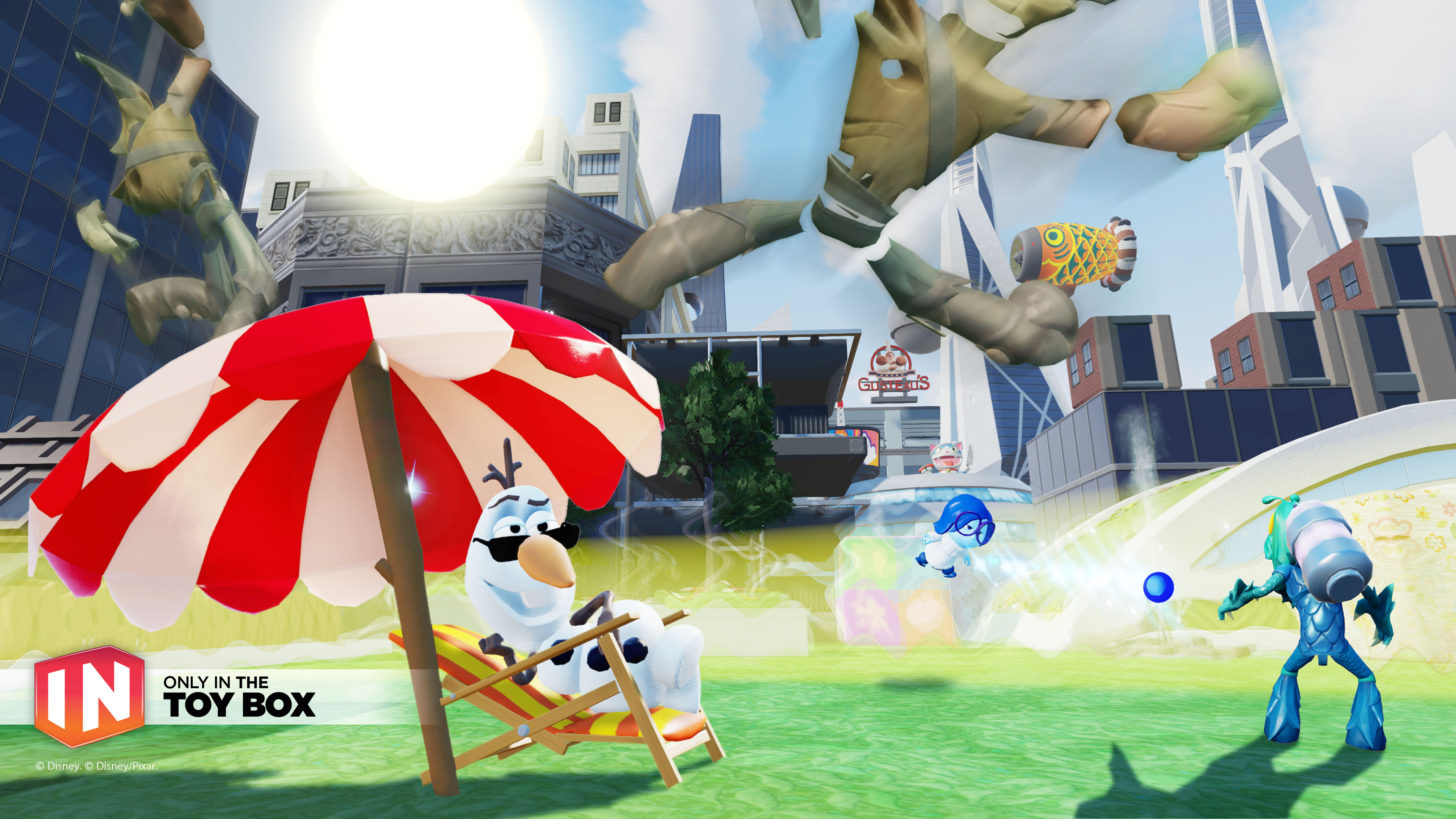 Above: Olaf chills in the Toy Box.

If you’ve made it this far in your toy box journey you are not only having fun playing a video-game but learning transferable programming techniques, logical thinking, planning and creative world design. The toy box mode has been used in a variety of educational settings in this way.

To get the most out of the toy box certainly requires plenty of time and investment, but the results can be impressive. For some this investment has paved the way to developing games commercially — user created toy boxes that have become popular in the community have led to some creators even being employed by Disney Interactive.

Disney Infinity has many strings to its bow, the toy box is by far the most impressive (and cheapest) and offers an experience unrivalled by its toys to life competitors.