Prepare to die for this beautiful print of Lordran, the dangerous and melancholy world of From Software’s action role-playing game Dark Souls.

Laudate Solis, which is currently available to buy at Attract Mode Shop and Fangamer, is the work of Judson Cowan, an American graphic designer currently living in Scotland. Cowan loves the Souls series, but it was another emotion that drove him to create his Lordran map — disappointment.

“It was going through Dark Souls 2 and kind of feeling disappointed with it and not really understanding why, until I looked back at Dark Souls and how well-crafted [it was],” Cowan recently told GamesBeat. “It cast in stark relief how well-crafted the world of Dark Souls was in comparison to Dark Souls 2. Everything made sense in Dark Souls, it was all very compact, very rich and dense, and all vertical. You can look up from basically where you start and see where you end the game almost, which is really cool.”

“The ambiance behind [the Dark Souls series] is fantastic,” he added. “The underlying lore that you can kind of pick apart if you’re paying attention is really nice. It doesn’t shove it in your face. It doesn’t tell you anything upfront.”

With that in mind, Cowan sat down one day at work and began a pencil sketch. It was merely a bunch of weird shapes at first, but once he took the sketch home, he started drawing Firelink Shrine, Dark Souls’ hub area. That sketch then blossomed into what Cowan calls an “insane project.” 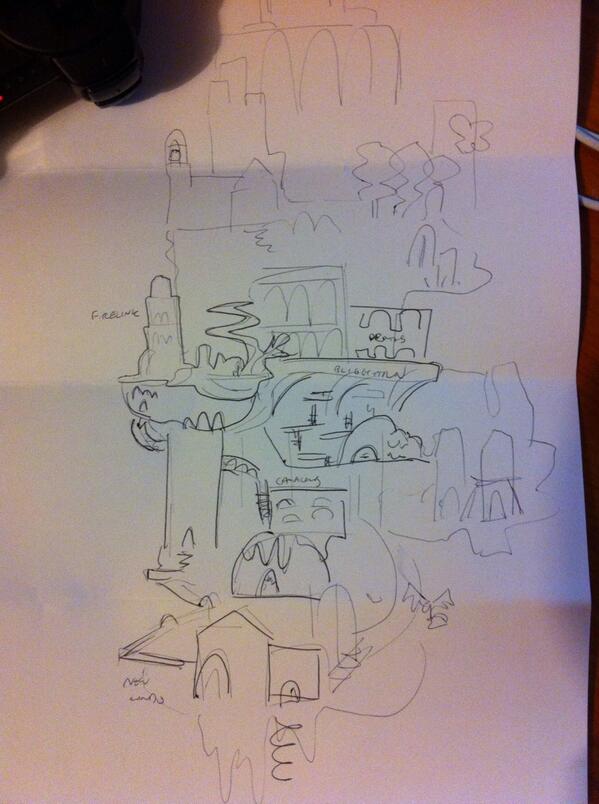 Above: A pencil sketch of Lordran, the basis for Judson Cowan’s Laudate Solis print.

He worked on it hard off and on for about three months. After finishing Firelink Shrine, he ran around the game world with a low-level character and a pair of binoculars, live-surveying everything. But his work stalled when he reached Lost Izalith, which he calls his least favorite area in Dark Souls.

“It was obviously rushed in production, and it shows from repeated texture maps and poor design,” Cowan said.

Lost Izalith was so frustrating that Cowan rage-quit and set the project aside for about nine months.

“I had it sitting on my desktop, and eventually I was like, ‘You know what? Fuck it. I’m never going to finish it. I’m going to put it up on Reddit so people can enjoy it, least as far as I got it done,’” Cowan said.

He put his work-in-progress up on Reddit and went to bed. The next morning, he woke up to hundreds of upvotes and a 99 percent positive rating. Kotaku blogged about it. Then, Edge magazine contacted Cowan and asked if it could run his work in its next issue.

“And I was freaking out because it wasn’t done,” Cowan said. “But all of the encouragement from everyone was immense. So, it kicked me in the butt to get it finished.”

Cowan estimates it took him a little over 100 hours to complete his project. A lot of that time was spent re-texturing everything. “At some point, I decided I would put a second color texture on Sen’s Fortress, and then it look so good I had to re-do the entire map … which added probably another 30 to 40 hours of work,” he said. “But it was worth it! It looks great.”

When asked if he’ll create any more maps in the future, Cowan laughs. “When I got done with this, I never wanted to draw anything again,” he said. “It was such an overwhelming process that it would be discouraging to try and start fresh on anything.”

Still, Cowan said he’s considered creating a companion piece to Laudate Solis, a print of the Painted World of Ariamis, an optional area of Dark Souls that he couldn’t fit into the original illustration.