Google announced Sunday that former Hyundai president and chief executive John Krafcik will be leading the Internet giant’s self-driving car project from the end of September.

The company, which recently announced it is breaking itself up under new parent company Alphabet, also hinted that the self-driving car unit is “a good candidate” to eventually be spun out.

For now, though, the project will remain under the Google X research division. In June, the company said that its driverless cars had autonomously driven over one million miles, and at the end of June that it started road tests of its prototypes.

The decision to hire Krafcik seems partly to do with his ideas around commercializing the technology, evolving it from more than just a super-cool but experimental project into a fully fledged and viable business.

In a series of tweets Sunday, Krafcik said, “Yes, true: I’m joining the Google Self-Driving Car project in late September.This is a great opportunity to help Google develop the enormous potential of self-driving cars. I can’t wait to get started.”

“Self-driving cars could save 1000s of lives, give people greater mobility & free us from things we find frustrating about driving today,” he added.

This is a great opportunity to help Google develop the enormous potential of self-driving cars. I can’t wait to get started.

Self-driving cars could save 1000s of lives, give people greater mobility & free us from things we find frustrating about driving today.

Earlier this year, Google asked artists to submit designs to display on its self-driving car prototypes. In July, the program was in the news again when Google stated that two accidents involving its vehicles were caused by human drivers of other cars. (Sounds about right.)

About bringing Krafcik onboard, the company said in a release, “This is about getting ourselves ready for the future, so we can bring this technology to its full potential. The project is not becoming an Alphabet company at this stage, though it’s certainly a good candidate to become one at some point in the future.”

The project’s former head, Chris Urmson, is expected to move over to the  technical development and software side, according to The Wall Street Journal.

Krafcik was most recently president of online car-shopping service TrueCar — a company clearly keeping abreast of today’s Internet-connected world — as well as a chief engineer at Ford.

Jeremy Alicandri, vice president of Habberstad Auto Group, took to Twitter to congratulate Krafcik: “This is super exciting! Google now has one of the auto industry’s best of the best on their team!”

Another user joked about how fast Krafcik has changed his Twitter profile’s background to an image of Google’s self-driving car. Google is now also listed on his Twitter account, though not yet any specific title — something which may or may not be added, going forward. 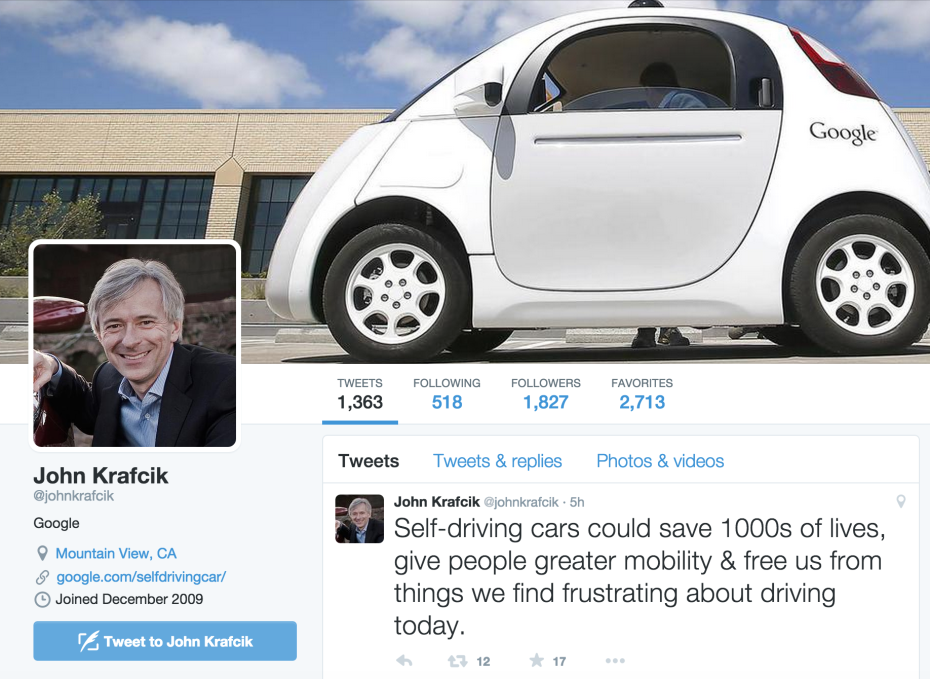