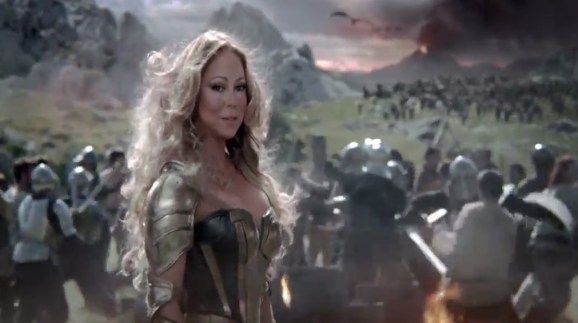 Mariah Carey is in, and Kate Upton is out. The pop singer appeared in a new commercial for Game of War: Fire Age today.

The commercial is a big deal for Machine Zone, as the previous Kate Upton spots (one of which aired during the Super Bowl) have generated huge awareness for the publisher’s Game of War free-to-play mobile app, which is reportedly being advertised more on TV and on the web than most console games. Mobile gaming is broadening its reach, and it could reach $30 billion in in revenue this year (according to market researcher Newzoo), with a sizable chunk of that going to Machine Zone.

Game of War has consistently held the a top-3 spot on the top-grossing lists of the app stores since the game debut a couple of years ago.

TV ads for mobile games began around 2007 in Japan, followed by Germany around 2012. When games such as Supercell’s Clash of Clans, Machine Zone’s Game of War, and King’s Candy Crush Saga began to dominate the app store rankings, TV advertising for mobile games became much more common.

It’s not clear how much Machine Zone paid for Upton, but chief executive Gabe Leydon reportedly said that the company spent about $1 million on the Upton herself, according to a recent lawsuit (now settled) between Kabam and Machine Zone. Those ads reached far and wide, both on TV and on the web. Various YouTube links for the Kate Upton ads have at least 30 million views. Those views allow Machine Zone to get a lot more payoff from the ads which use expensive air time (such as the Super Bowl ad).

While the Upton ads were pretty straight on sex appeal and fantasy violence, the Mariah Carey takes a different tack, as it’s funny and more creative. That might actually get more people talking about it. It remains to be seen whether this approach will work as well as the Upton one did. But we’ll be able to judge that based on how many views the videos get. Meanwhile, Think Gaming estimates that Machine Zone makes more than $1 million a day from in-app purchases in the game

Now Carey is the new heroine in the commercial, as her song A Hero Comes Along plays just as some beleaguered medieval soldiers call for reinforcements on a smartphone. She puts in a brief appearance at the close of the commercial, saying, “Time to be heroes, guys,” after she blasts a dragon out of the sky. Like the Kate Upton ads, the Mariah Carey ad doesn’t show off the actual gameplay of Game of War, which has simple graphics as a mobile strategy game. It has lasted a long time because players can communicate easily within the game and form close-knit clans in competition with other clans. Those players spend a lot of money in the game, justifying the marketing budget that helps rope in new players.

It’s not clear what Machine Zone is spending on Carey, but it’s clear that mobile game companies are spending more on advertising than console game companies, according to John Gargiulo, senior vice president of business development at Bluestacks. Gargiulo said in a talk at the Casual Connect game conference that TV ads generate installs, they get existing players to re-engage, lower overall digital spending, and improves the credibility of a brand. As mobile games reach a broader audience than console games, it’s easier to see why it makes sense to advertise through TV commercials compared to other media.

Gargiulo estimates that top ad agencies charge $250,000 to $1 million to dream up a new commercial.

“Coming up with great creative is difficult,” he said.