Some criticized the latter for its long cutscenes and lack of actual, you know, game parts. Well, it seems like series’ director Hideo Kojima took that criticism to heart, because The Phantom Pain, which is out now for PlayStation 4, Xbox One, PlayStation 3, Xbox 360, and PC, is a huge, open-world game filled with missions and opportunities for self-made fun.

However, if you’re hoping for a story that gives you a clear reason for Big Boss’ change from hero to villain, you’ll be disappointed.

Stealth’s always been the name of the Metal Gear game, and it’s never felt more satisfying than it has here. Like in previous titles, you can grab enemies, interrogate them for info, throw them to the ground, or just take them out with head shots. You have the option of going with lethal or non-lethal tactics, each with their own advantages and disadvantages (you can recruit soldiers you don’t kill, but doing so might expose you to the enemy). 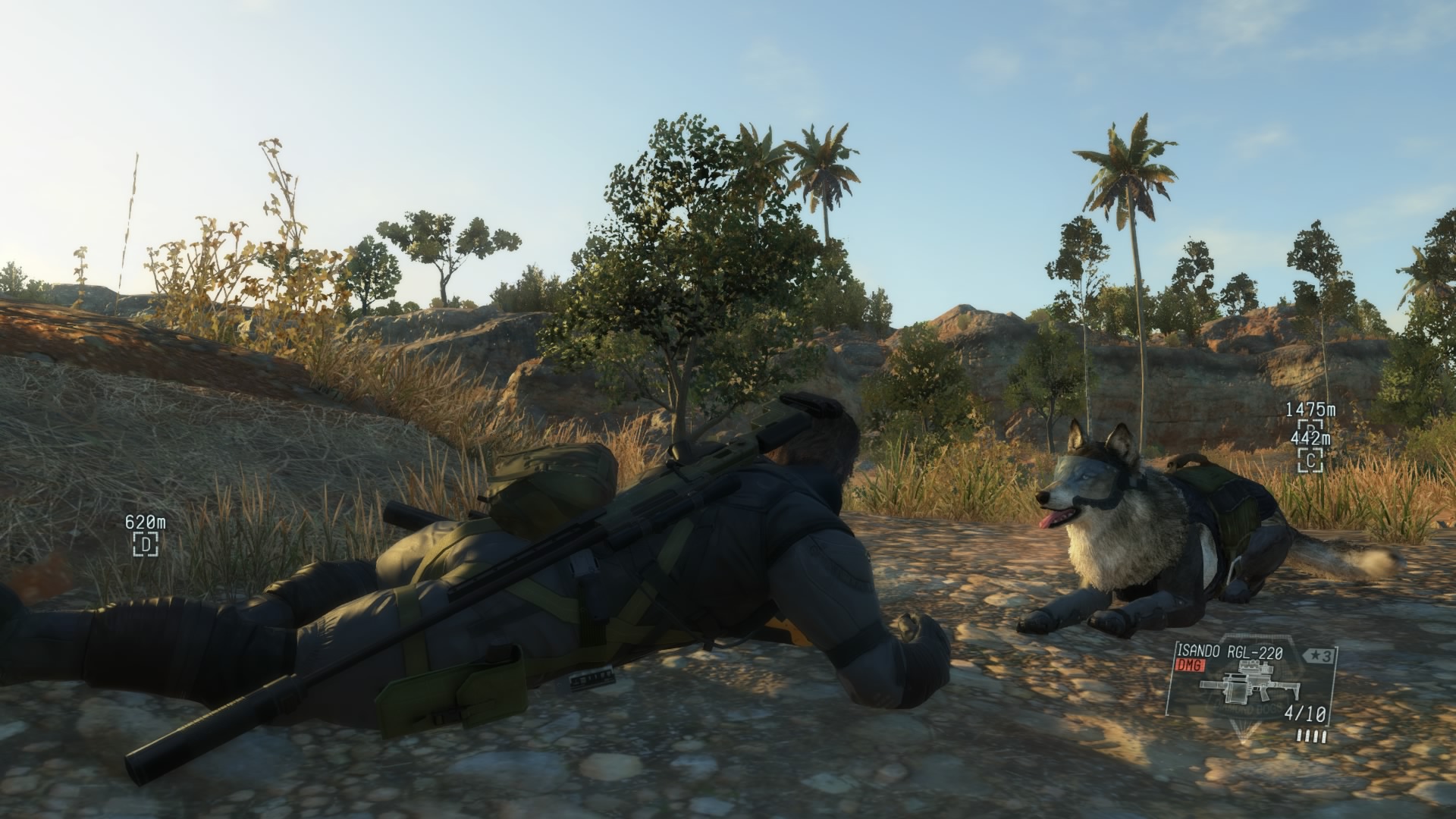 Above: Meeting DD eye to eye.

The Phantom Pain also has Reflex Mode, which gives you a couple of seconds of slow-motion to react when an enemy spots you. Not only does this feature make sense (I think most people would be surprised to discover a dude with a gun hiding a few feet away from them), but it gives you more stealth options. If a soldier is alone, you can safely expose yourself to them if you think you’re close enough to land an easy head shot. You can even take down a couple of lone enemies this way. If one soldier is off on his own, you can sprint toward him and hope to tackle him before he can snap out of his surprised state.

Reflex Mode is a nice safety net, since it lets you save yourself if you get caught by unexpected enemies. It’s not a total fail-safe, since it won’t help much if multiple enemies notice you or if someone from far away discovers your location.

Past Metal Gear Solid games were largely linear and took place in cramped outdoor areas or industrial indoor facilities. The Phantom Pain is completely different, with almost all of the action set in two large, open worlds populated by dozens of smaller bases (most of which house small, single-room buildings). This greatly changes your approach, since preparation is more important than ever. You can use your binoculars to scout areas, create markers on points of interest, and track enemy movements. 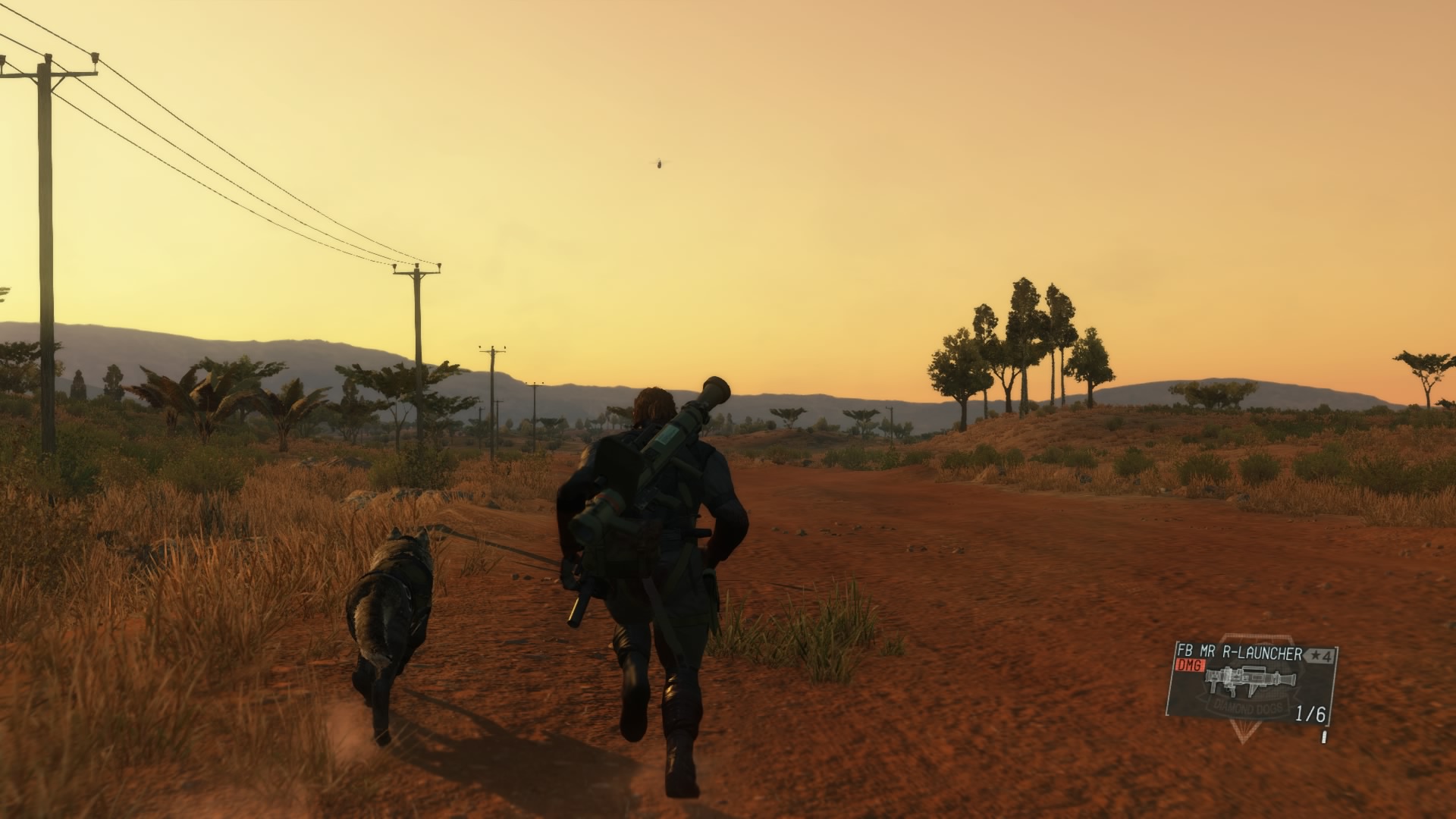 Above: A lonely road is now a little less lonely.

The open worlds also give you a playground to run in. It has plenty of structured missions, but you can also explore on your own. When doing so, you can find blueprints for weapons, resources for your Mother Base, and you can even cripple enemy areas by taking out their equipment, which can make future missions easier.

Besides the open-world gameplay, maintaining your Mother Base is a big part of The Phantom Pain. Expanding your base and recruiting more staff (mostly by extracting them from the open worlds with Fulton balloons) unlocks the ability to research new equipment, a lot of which you’ll need for trickier missions. The rewards are great, and expanding your base is easy as the game takes care of a lot of the grunt work (it automatically assigns recruited soldiers to the departments they’re best suited for).

Also, the Mother Base is a place you can actually explore on foot. Returning to Mother Base frequently between missions rewards the player by increasing staff morale (which can make your staff perform better and grant you access to better equipment). You can also find some secret items (and even cutscenes) by exploring the area.

Above: Justttt a tad shameless.

Snake is known for solo infiltration, but The Phantom Pain gives him buddies that he can take on missions with him. The first, a horse, is pretty self-explanatory. You can ride him across the large open worlds, which is a nice convenience. D. Dog is more helpful during actual missions, as he’ll sniff out enemies, prisoners, and mines, reducing the amount of time you have to spend scouting out a mission area.

The best, however, is Quiet, who is a full-pledged character that makes a big mark on the story. She’s a silent sniper that can scout out areas, take out enemies on command, and cover your escapes. Plus, her tragic story and mysterious intentions make her the game’s best character. My only complaint is her … well, distracting outfit, which the game does explain. It’s just an excuse for it to shove her boobs in our faces. I’m not saying I’m not a fan of boobs, and I think sexualized characters can work well when utilized correctly (like Bayonetta), but Quiet’s near-naked outfit stands in contrast with her tortured, sad character.

Metal Gear games are famous for drowning the player in exposition. Somehow, The Phantom Pain has the opposite problem; it doesn’t really have all that much of a story. Most of the missions you go on only vaguely tie into the plot, and much of the game’s dialogue and deeper story elements come from a series of in-game cassette recordings or cutscenes that take place between missions instead of during them. 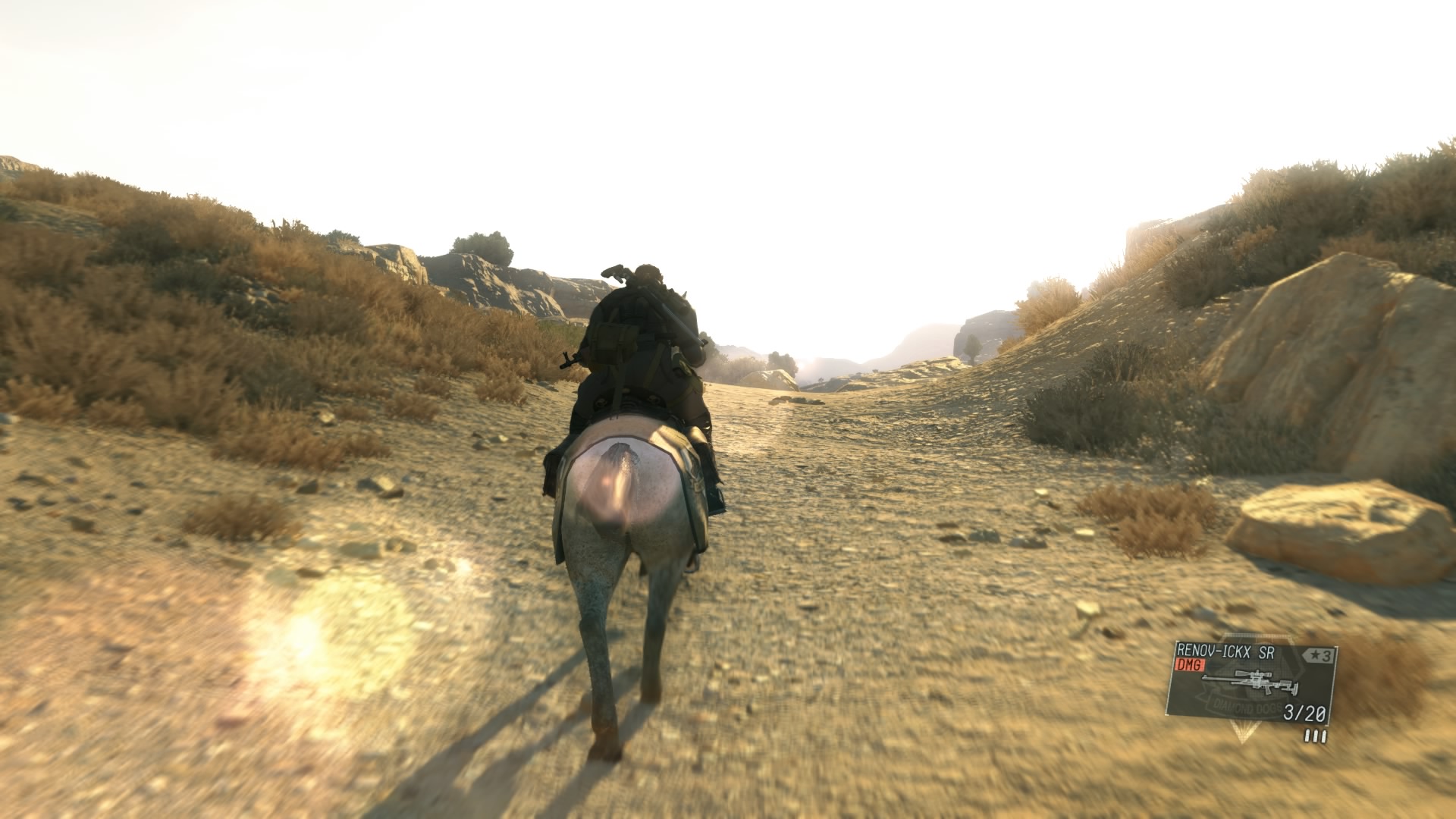 Above: It’s a long road. I’m serious, my adventure can take you over 100 hours to complete.

And the little story there is doesn’t really amount to much of anything. I was actually shocked when the ended. I felt like something was missing. Well, it turns out something was, as special editions of the game come with a bonus feature that shows off the cinematics for an extra story mission that would have tied off a lot of loose ends. I’m pretty shocked it was cut, since the current ending feels oddly empty.

In fact, the whole story feels like an afterthought to the incredible gameplay experience. When I think about how this fits in with other Metal Gear games, well, it doesn’t really offer any major revelations that change the way I perceived the series before this. I had assumed that this game would be about Big Boss’ transformation from a wounded hero to a misguided villain, but that never really happens. Hell, Peace Walker, an side-story in the series that came out for the PSP, of all things, actually offers more insight that question. The Phantom Pain’s plot feels like extra material, like reading the appendices at the end of The Lord of the Rings. It’s neat information, but hardly essential. You can’t help but wonder how much more was cut and if it had something to do with Konami’s and Kojima’s contentious relationship. 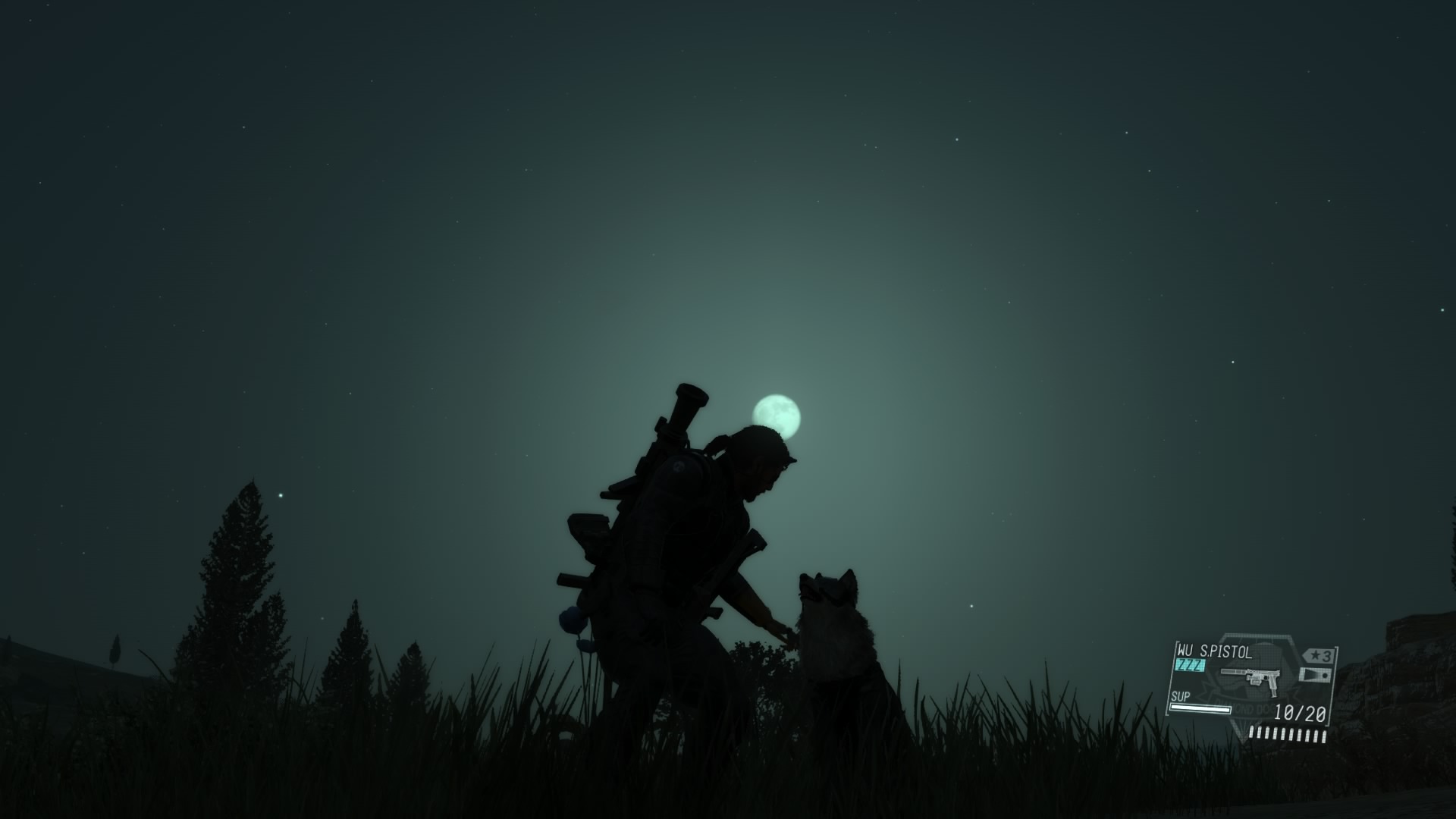 Above: One of the many peaceful moments you can have in The Phantom Pain.

As a game, The Phantom Pain excels. The stealth and action work beautifully in the open-world setting, and maintaining your Mother Base gives you plenty of rewards. It’s long, fun, and gives players tons of variety.

I just wish that the story offered more. I can understand why Kojima felt the need to scale things back a bit after the bloated Metal Gear Solid 4, but this goes a bit too far in the other direction. Somewhere between Guns of the Patriots and The Phantom Pain is a perfect Metal Gear Solid that I don’t think we’ll ever see.

Metal Gear Solid V: The Phantom Pain is out now for PlayStation 4, Xbox One, PlayStation 3, Xbox 360, and PC. The publisher provided GamesBeat with a copy of the PlayStation 4 version for this review.