Apple today launched Move to iOS, the company’s first Android app built in-house. As we noted earlier, “It should surprise no one that the first app Apple built for Android helps you ditch the platform.” The fact that the app is getting flooded with one-star reviews is not particularly surprising, either.

At the time of publication, the app has an average rating of 1.8. The larger majority (almost 79 percent) are one-star reviews, followed by five-star reviews (almost 19 percent).

If this isn’t a prime example of just how dumb the five-star rating system is, we don’t know what is. Less than 24 hours after release, here’s what any Android user who fires up Move to iOS on Google Play will see: 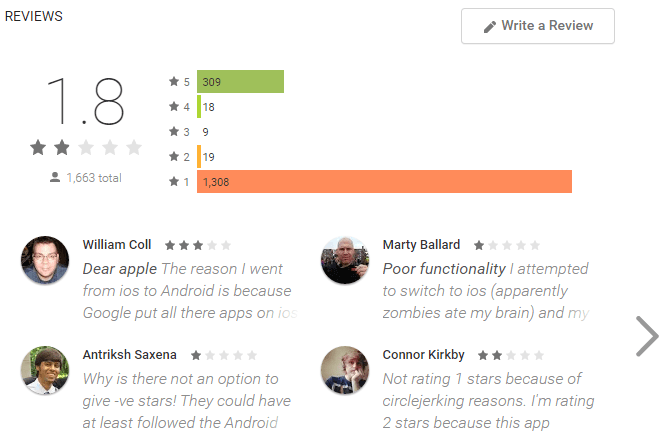 This is also a stark reminder of just how much Android users hate iOS. I read through a bunch of these reviews and I have to say these three summarize the whole lot the best: 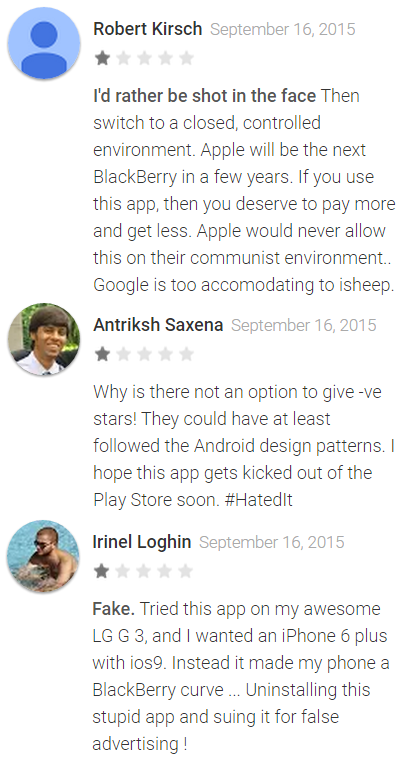 Some are unhappy that Apple didn’t even bother to use Google’s Material Design, others dislike Apple’s closed platform, and the rest just hate the app because it was developed by Apple. As many point out, Google wouldn’t be able to launch an equivalent app on Apple’s App Store because of this rule in its review guidelines:

3.1 Apps or metadata that mentions the name of any other mobile platform will be rejected

I could spend hours sifting through these reviews and picking out the most hilarious ones. But that’s not really the issue I want to discuss here. Fanboys will be fanboys, haters love to hate, and trolls will troll. The bigger problem is that Google is giving these “reviewers” a platform to write whatever they want.

You see, just like on Apple’s App Store, Google Play lets you rate an app right after you download it. I grabbed Move to iOS myself, and indeed I was able to choose the one-star option right away. 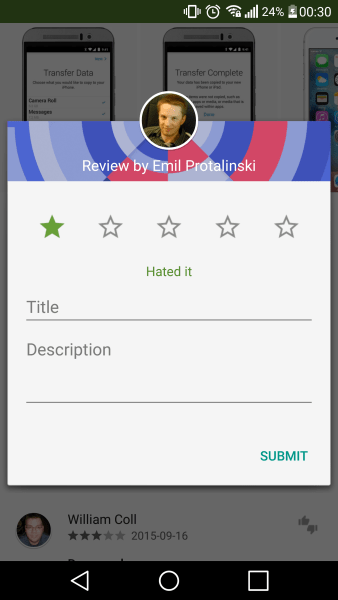 Before you rip me apart, no, I didn’t hit submit.

Google (and Apple) could solve this issue fairly easily: Require x minutes of use before you can rate an app. What “x” should be isn’t easy to say, and probably widely depends on the type of app in question. It’s a numbers game: How long are you willing to wait to do “harm” to an app you’ll never use?

Still, even a minimum one minute of use would significantly cut down on the number of illegitimate one-star reviews. And this goes the other way too: Many five-star reviews are also fake.

Both Google and Apple would help users and developers alike by revamping how app store reviews work.