Enterprise software company Salesforce is making a whole bunch of product announcements and updates this week at its annual Dreamforce conference in San Francisco.

The company has already made a splash with a giant “Dreamboat” cruise ship anchored in the San Francisco Bay, with stars like Goldie Hawn, Stevie Wonder, and Adrian Grenier on hand for the event.

Sales reps know Salesforce as a prominent provider of customer relationship management software, but the company is always reaching for more attention, presumably to raise Salesforce’s profile as an enterprise software player with a wide range of tools for companies — right up there with Microsoft, Oracle, and SAP.

And Salesforce certainly has news to point to. It’s bringing data science from its RelateIQ acquisition into the core Sales Cloud product, releasing a new IoT Cloud service, broadening the existing partnership with Microsoft — and that’s just the beginning. Partners are making announcements, too. Here’s an overview of all the big news coming out of the show. 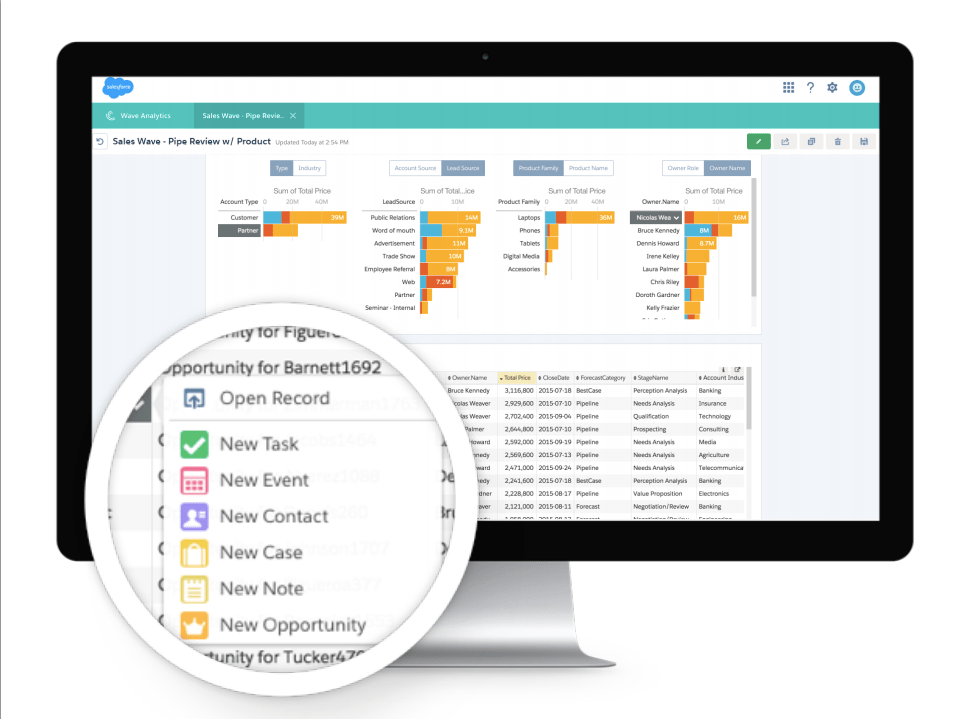 Salesforce today announced new capabilities for its Analytics Cloud, a cloud-based business intelligence tool that Salesforce launched almost a year ago. It’s becoming possible to embed dashboards from the Analytics Cloud into other parts of Salesforce, and new Wave Actions allow salespeople to take action on dashboards based on what they see.

That’s a sensible next step for the Analytics Cloud. Sales Cloud is already popular among sales teams, and Salesforce is effectively making Analytics Cloud more of a starting point for sales work rather than a standalone BI application.

Salesforce launches SalesforceIQ for Sales Cloud and for Small Business 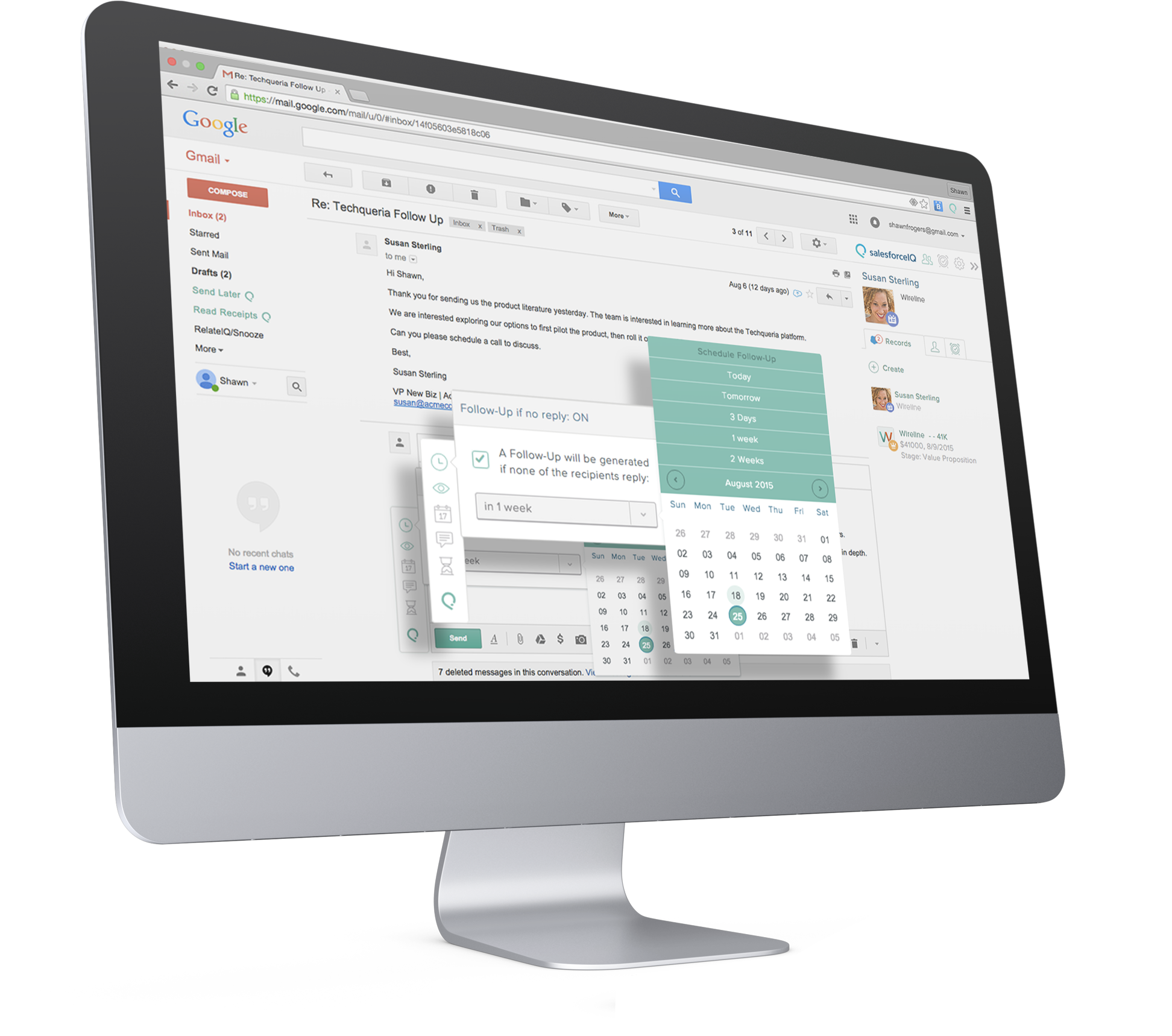 Above: The Chrome Extension for email that comes with SalesforceIQ for Sales Cloud.

The new products automate the process of getting data to the right places, so sales reps can focus on doing more important work. SalesforceIQ for Small Business passively pushes information from calendars, emails, calls, and marketing automation software (HubSpot, MailChimp, and Salesforce’s Pardot are being supported initially) into the CRM. SalesforceIQ for Sales Cloud, with its Chrome extension for Gmail and its iOS and Android apps, can not only update CRM records from your inbox but also brings information from the CRM into your inbox after analyzing emails. That way, salespeople don’t have to jump back and forth so much. 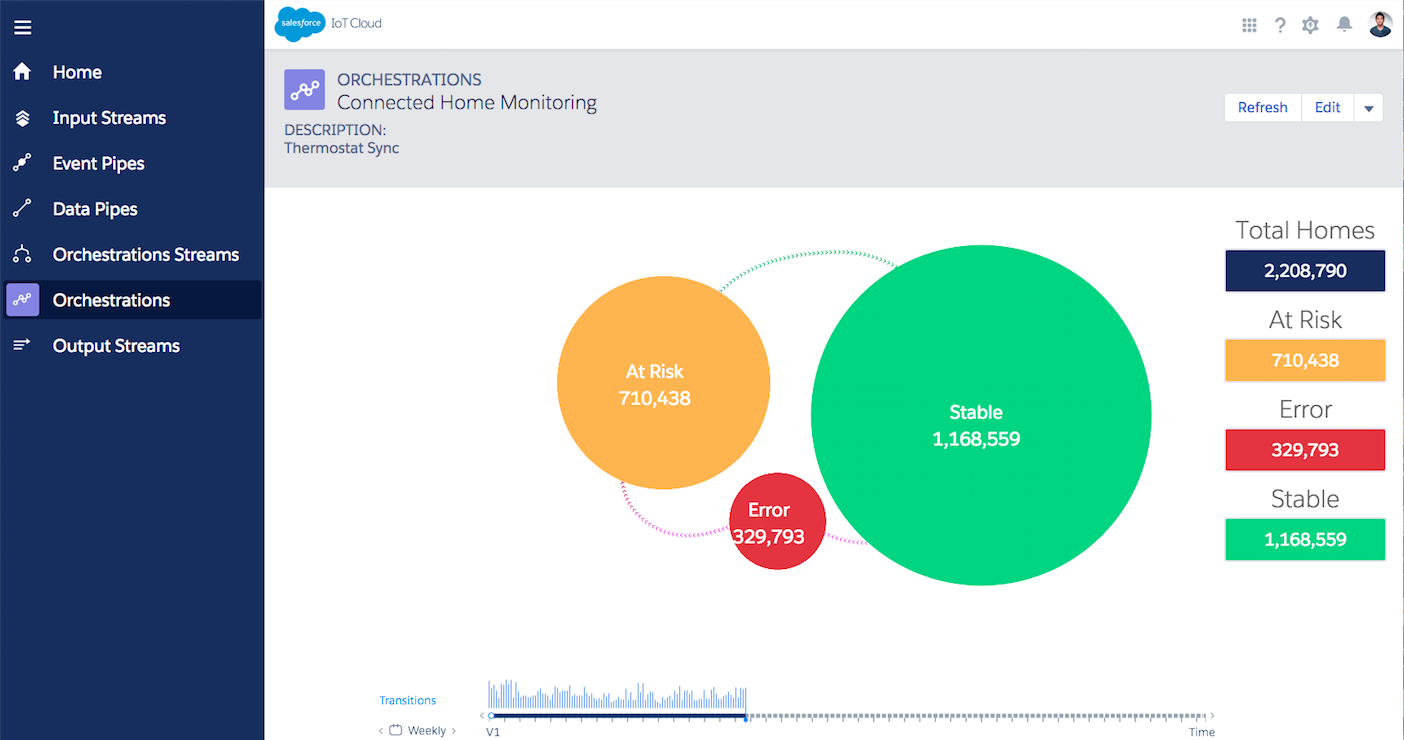 Above: A screenshot of the new Salesforce IoT Cloud.

Cloud software company Salesforce today is announcing the release of IoT Cloud, a new service that will put the company into a new market. Think of IoT Cloud as a tool that non-technical workers can use to automatically kick off specific actions based on data from Internet-connected devices, social media messages, websites, and other sources.

Of course, IoT Cloud can integrate with Salesforce’s existing services, like the Marketing Cloud and the Service Cloud. Just as IoT can integrate with other entities in the Salesforce portfolio, yesterday Salesforce announced that it’s more tightly integrating the Analytics Cloud with other parts of Salesforce, such as the widely used Sales Cloud customer relationship management (CRM) software.

Telecommunications API provider Twilio has committed itself to setting aside 1 percent of its equity to be used to support its nonprofit foundation, Twilio.org, over the next decade. This could generate more than $10 million for the organization.

The move comes as part of the 1 percent pledge that was started in 2014 by Atlassian, the Entrepreneurs Foundation of Colorado, Rally Software, and the Salesforce Foundation as a means to accelerate philanthropy within businesses around the world. But it’s not just a financial transaction. The pledge includes 1 percent of employees’ time and the company’s product as well — the 1/1/1 pledge that has been heavily touted by Salesforce chief executive Marc Benioff.

Box’s Levie: ‘Build for the vision you’re trying to create’ 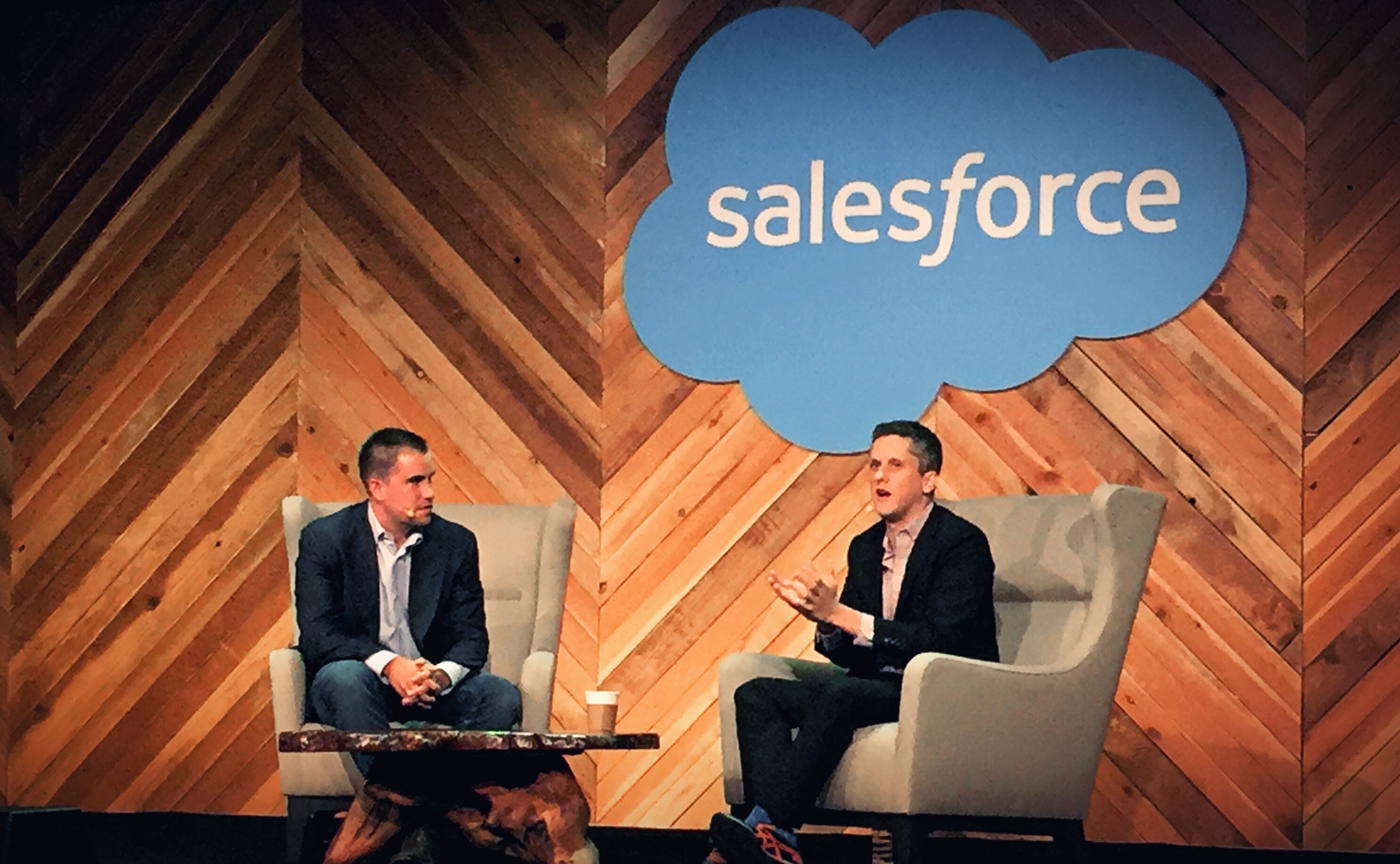 Box chief executive and cofounder Aaron Levie says that startups shouldn’t necessarily pay attention to their customers but should instead remain dedicated to their vision.

Kicking off the first-ever Startup Summit as part of Salesforce’s Dreamforce conference, Levie participated in a fireside chat with Salesforce IQ CEO Steve Loughlin and spoke about how his company has scaled and established its culture. Before Box became a public company, it underwent a bit of a transformation on its path from consumer-oriented startup to what it is now: an enterprise platform.

The company’s shift to the enterprise has been well-documented, and it was during this process that an important belief came to Levie: Don’t build your products around a specific customer’s requirements, rather “build for the vision you’re trying to create.” 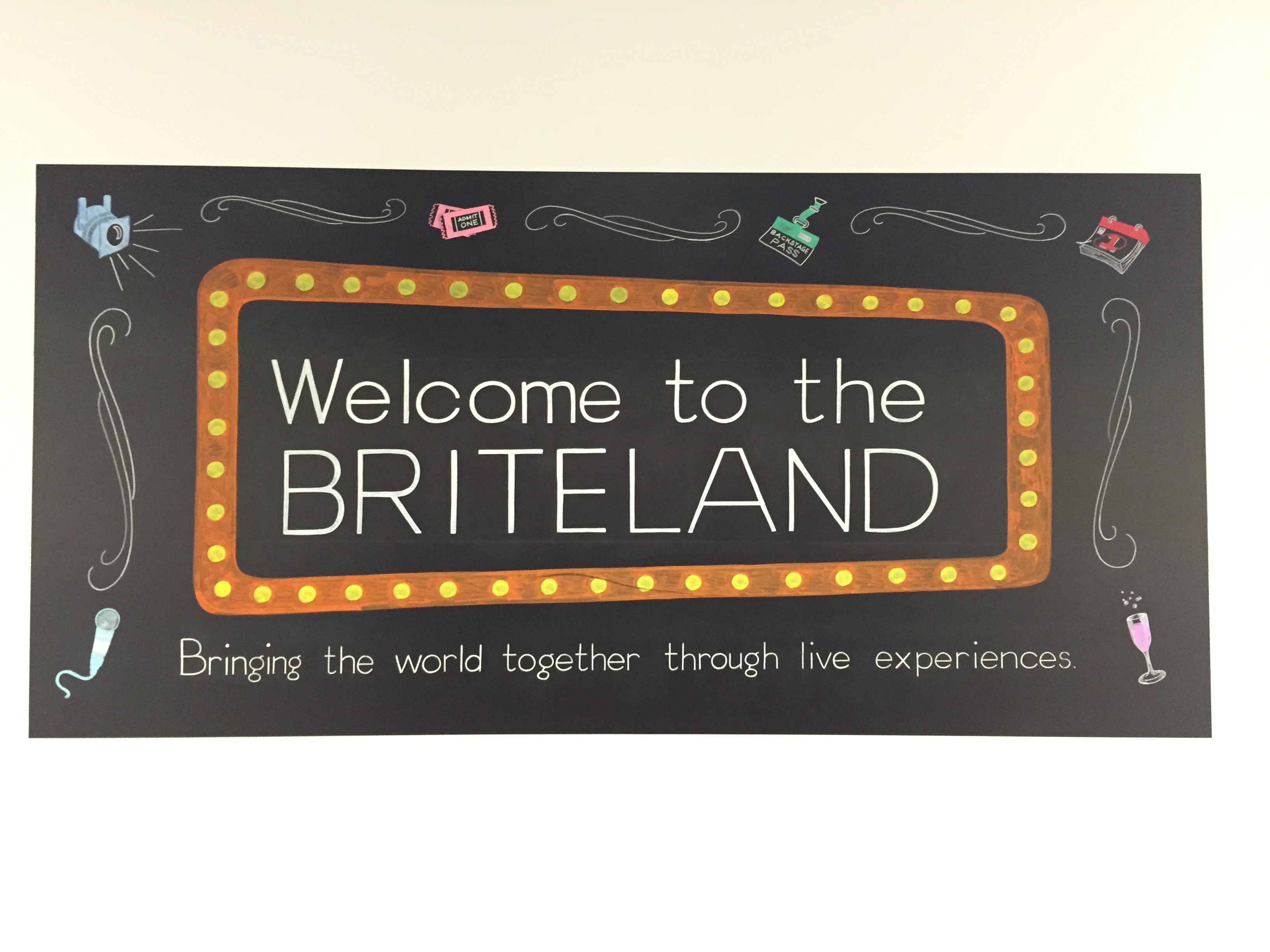 Eventbrite today launched a new way for businesses to connect their Salesforce instance right into the ticketing platform. Called EventbriteSync, it allows data to be transferred almost seamlessly between the two platforms.

Previously in beta, this app is now available free worldwide through Salesforce’s AppExchange. Once enabled, users will log into Eventbrite using OAuth2 authentication and then link their accounts with Salesforce. Instantly a 1:1 relationship will be created. What’s left is the configuration and mapping of data.

EventbriteSync offers what Eventbrite’s head of partnerships and platform Dylan Serota describes as “bi-directional sync.” Event data created through the ticketing platform is synced to Salesforce and contact lists and promo codes can be transferred back to Eventbrite to be associated with marketing campaigns. 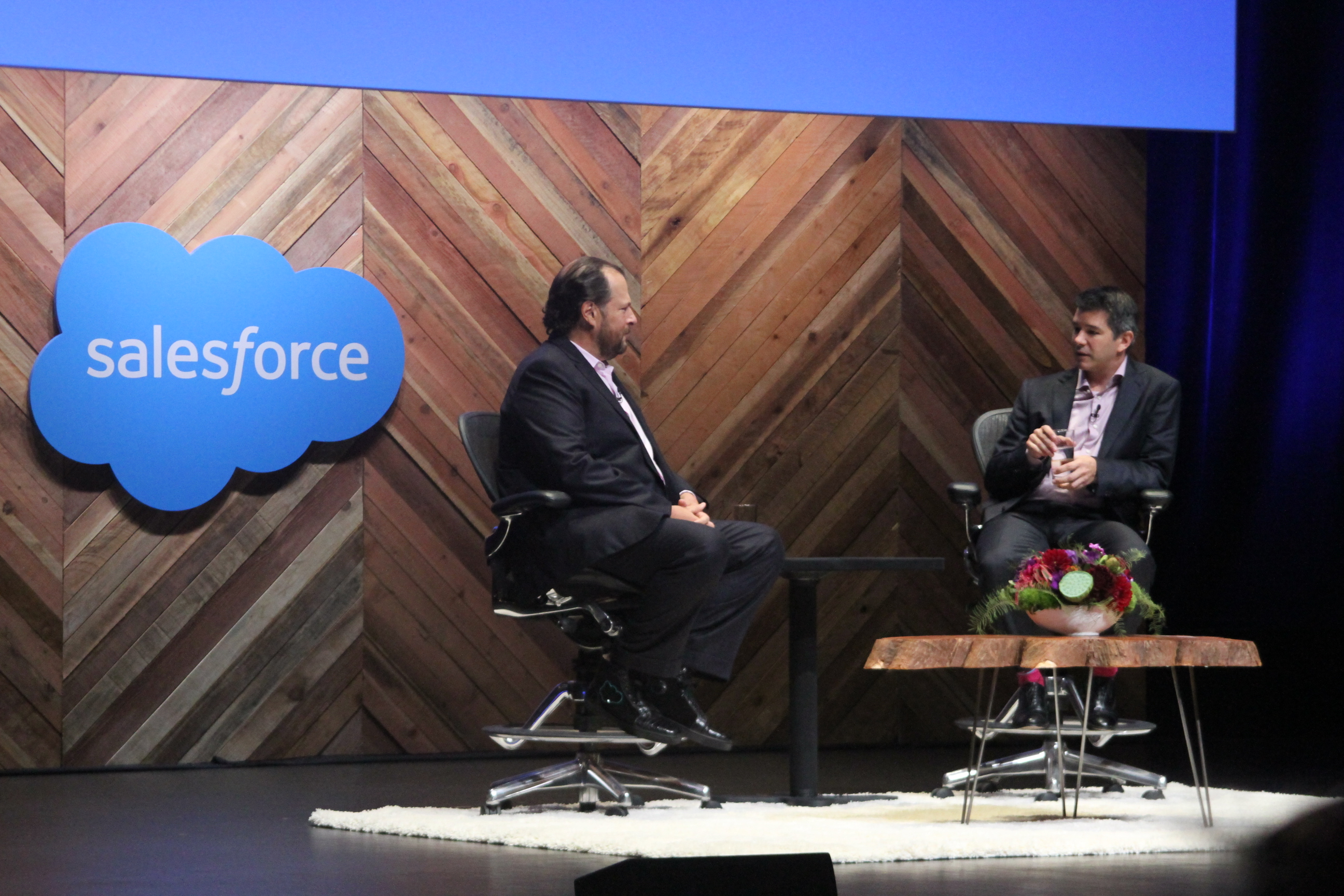 Above: Salesforce CEO Marc Benioff and Uber CEO Travis Kalanick on stage during a fireside chat at Dreamforce 2015.

Travis Kalanick says that UberPool isn’t as profitable as the rest of his company’s offering, but he’s not worried about it because it’s all about inducing carpooling in all the cities it operates in.

Speaking with Salesforce chief executive Marc Benioff as part of the Dreamforce conference, the well-coached Uber CEO said that over 100,000 people in all of its markets are carpooling every week. “That’s exciting,” he said. “That’s two cars becoming one.”

“If you were to boil down our product strategy, it would come down to three things: convenience, affordability, and a certain amount of magic,” Kalanick explained. “UberPool tries to hold convenience at the same level as the rest of Uber.” 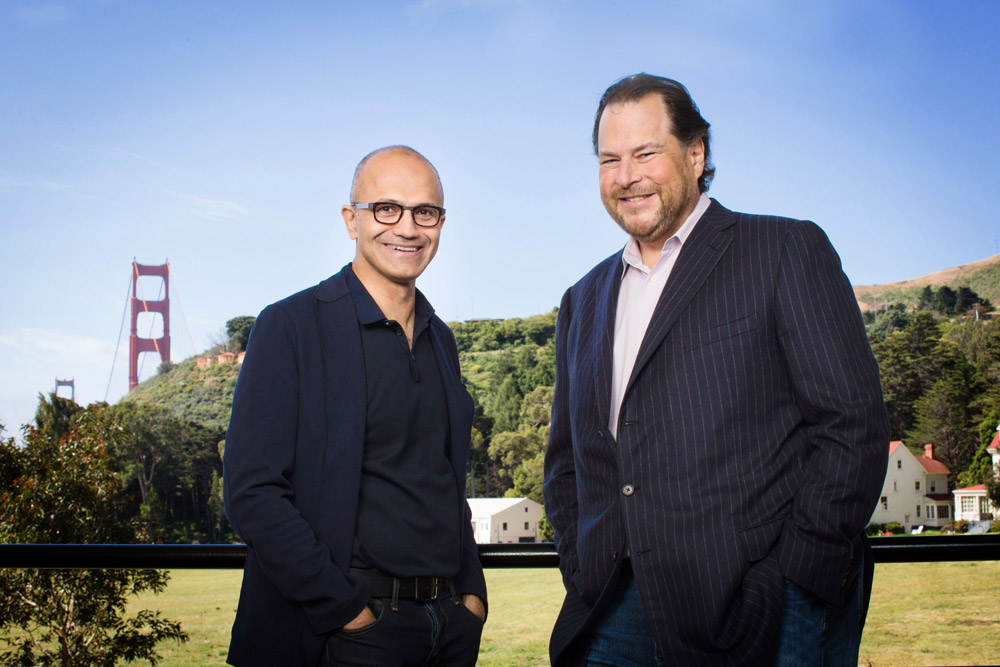 Salesforce and Microsoft — companies that traditionally compete in the customer relationship management software market — today announced a deeper partnership, building on the big one they announced last year. The new partnership will lead to integrations of Microsoft’s Skype for Business, OneNote, Office Delve, and Office Graph software products into Salesforce.

And Salesforce will come out with a Salesforce1 mobile app for Windows 10 in the second half of next year. 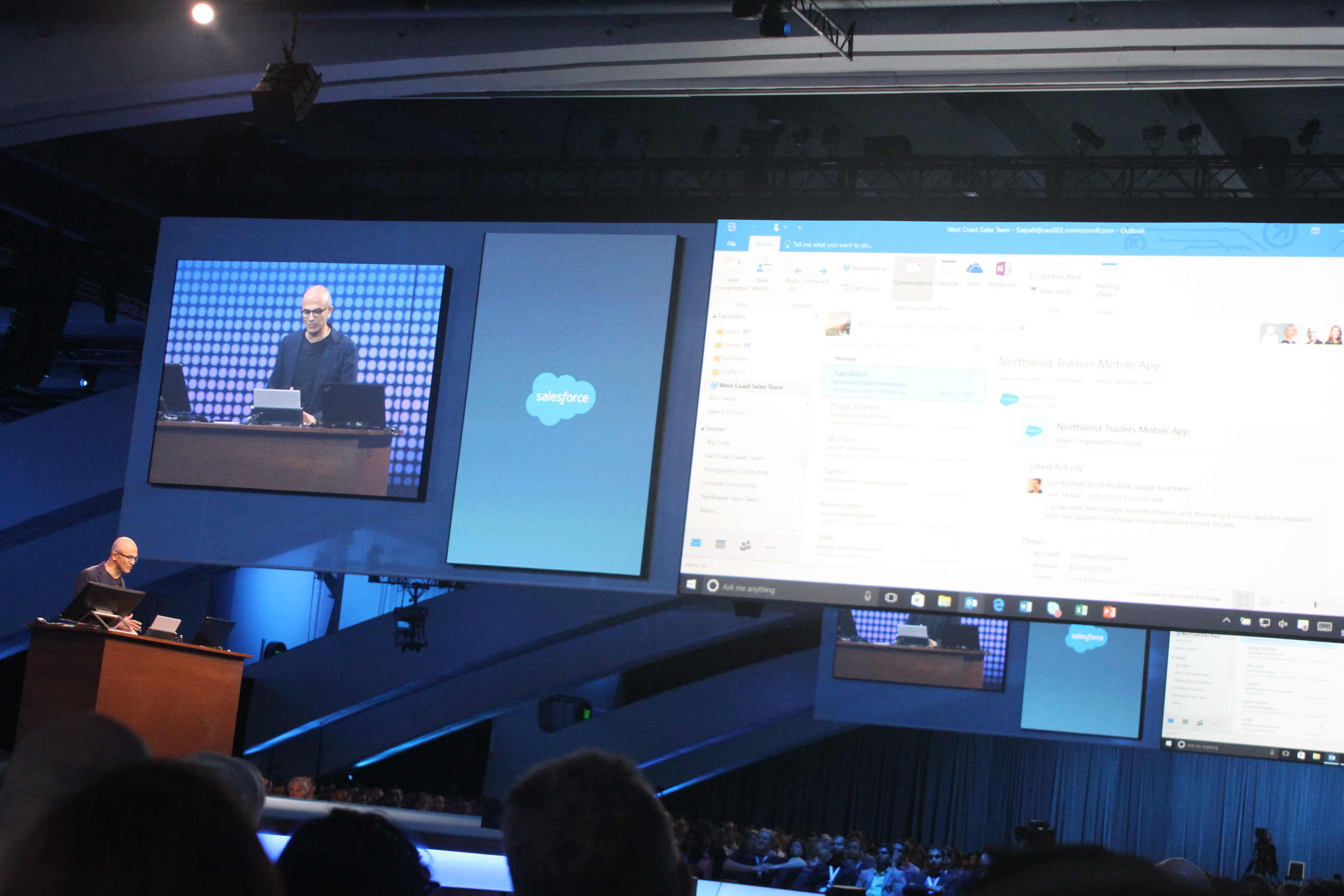 Salespeople will be able to run queries on their Sales Cloud instances simply by speaking. Power BI will provide dashboards and charts that can appear in Salesforce. Sales Cloud will get sales forecasts using predictive analytics as a result of the integration, too. And while the speech recognition might be the exciting part, the forecasts are likely the most important part. 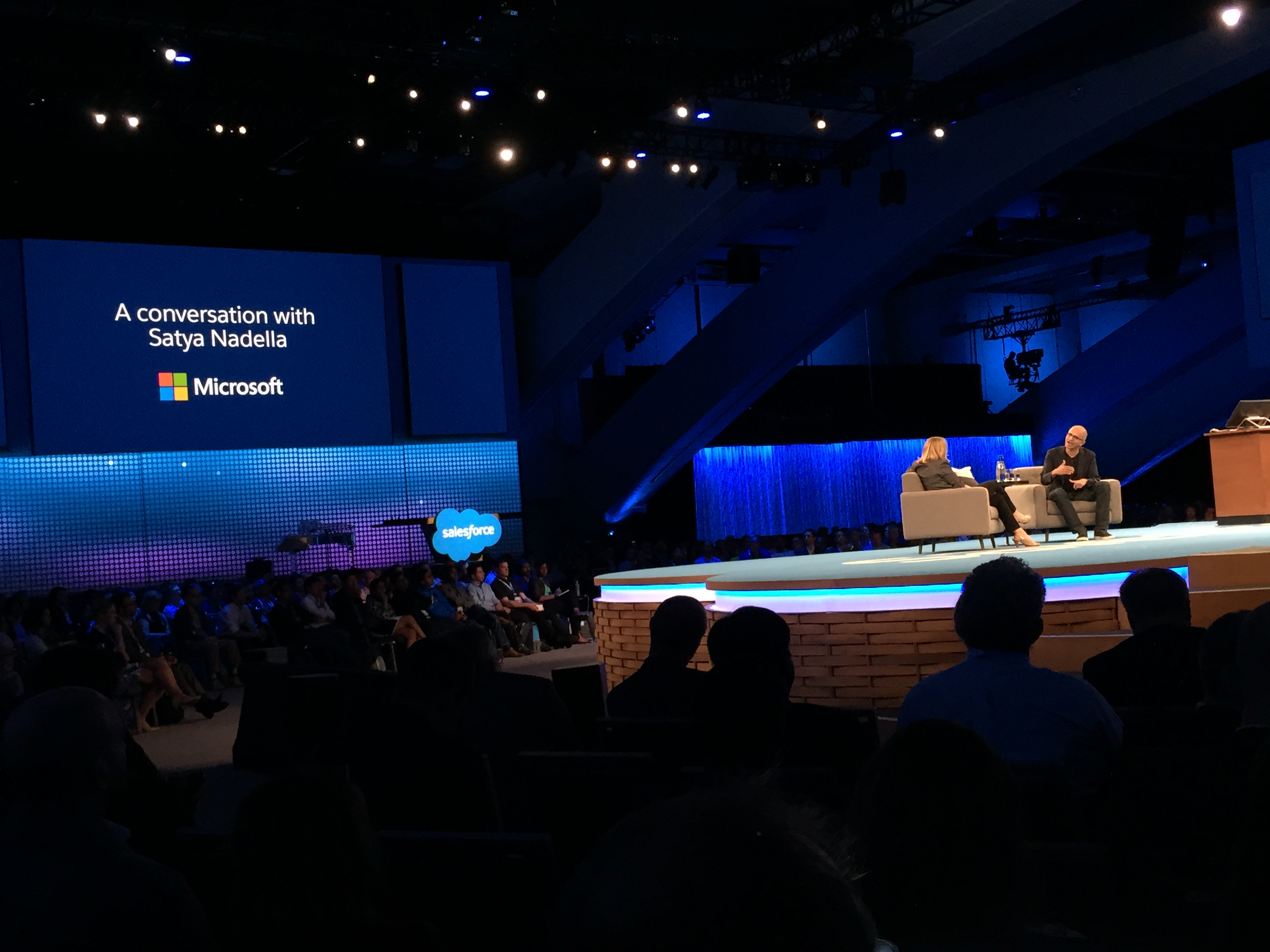 Satya Nadella made an appearance at the Dreamforce conference Wednesday afternoon to give an update on his vision for Microsoft. He also took the opportunity to give a couple of demos on how his company views the adoption of technology and talk about how its products are accelerating change in the world.

Among his remarks, perhaps the most poignant was the announcement that Microsoft is contributing $75 million over the next three years to help bring computer science to under-funded schools. Nadella believes that computational thinking is going to be an important skill for the next generation and needs to be taught in every school.

Note: we’ll be updating this post with more news throughout the course of the conference.