Here’s how a good battle works in the Total War series.

First, you set up your formation and jockey for position, facing the enemy. Then, you engage—the stronger force launching a charge, usually, or a give and take before full engagement between two evenly matched armies. This is where it gets tricky. In a bad Total War experience, this disintegrates into a rugby scrum. But in a good one, the lines hold for a while. The player can survey the battle, decide which flank needs a cavalry charge, or whether to send a victorious unit into a new fight, or let it rest. Perhaps there’s even a second phase to the fight, where reinforcements or rallied troops can turn the tide.

The problem with recent Total War experiences, like the uneven Rome 2, came in the third phase — you had little time or space to respond to the initial engagement, because lines didn’t hold long enough. Indeed, few Total War games manage to get this right immediately, as it usually requires patches or mods to get the right rhythms. (Shogun 2 had it right off the bat, although perhaps a little too fast.)

Thus it was a shock to me that, right off the bat, the pre-alpha version of Warhammer: Total War seemed to have these battle rhythms locked down. In this fight, I played a Dwarven army fighting off a Greenskin ambush. Wave after wave of cheap Goblin units crashed into my disciplined Dwarves, followed by elite Trolls, a Giant, and a huge spider called an Arachnarok. 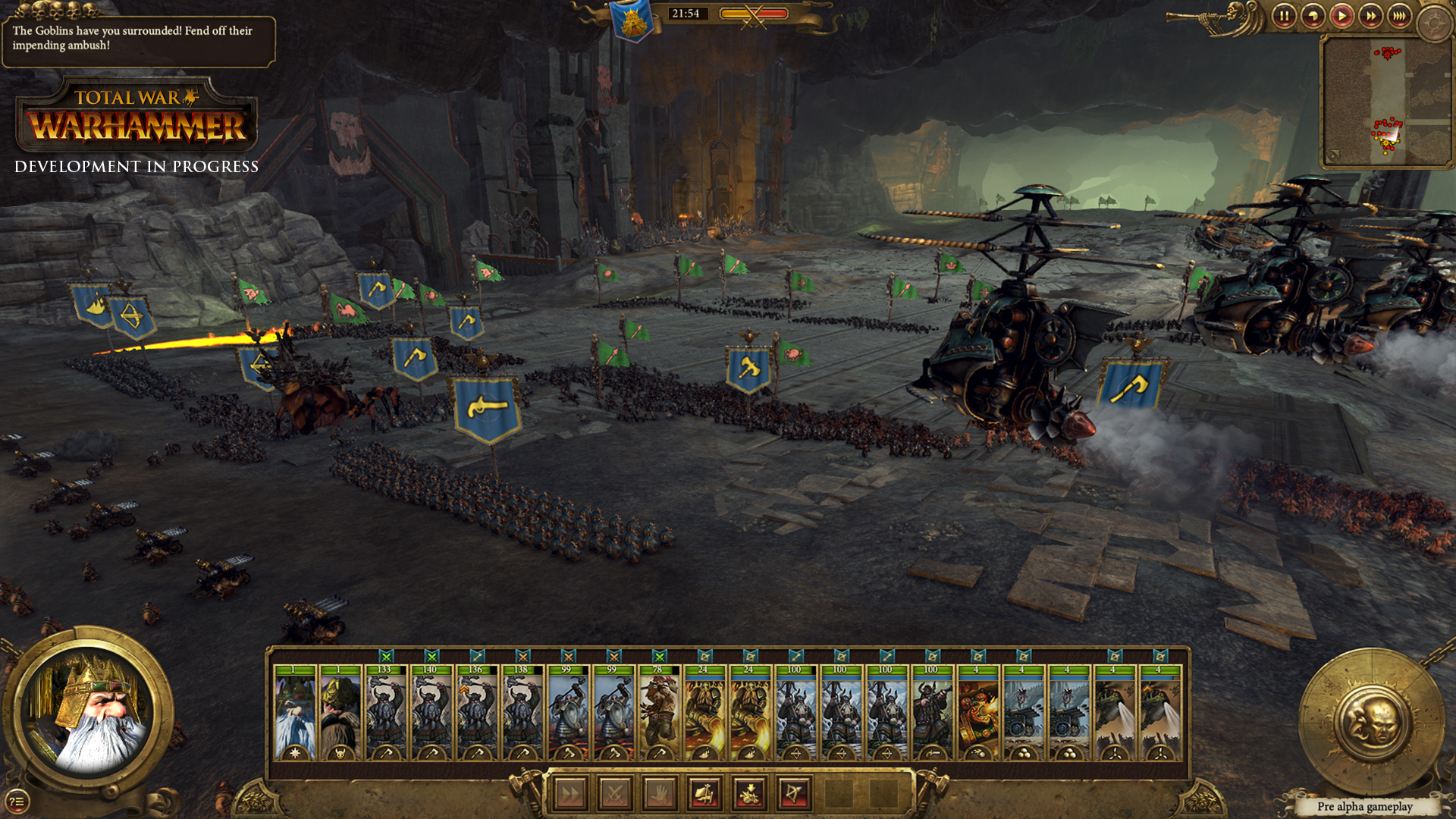 Warhammer: Total War is scheduled for release in 2016, and that’s as specific as the Creative Assembly was willing to get.

My Dwarves held their lines, with sonic and flame cannons blasting constantly, regular infantry defending my artillery as my heroes and elite Slayer forces got tossed at the enemy’s biggest, baddest units. As the battle grew desperate and the enemy started launching spells into my ranks, I got Gyrocopter reinforcements, dropping bombs on densely packed Goblin units and hunting down their routing forces to ensure they didn’t return. In the end, my lines held — almost all of my units were down to a quarter strength, but they never broke, and a great Dwarven victory was achieved.

Here’s the thing: What I just described is both how the battle went down in the game world, and how I experienced it as a critic and as a long-time Total War player. That’s remarkable harmony for any game, let alone one within the strategy genre that’s built on abstraction.

A big part of this is the synergy between the Total War model and the Warhammer universe. A distinctive battle between the Dwarves, with disciplined, strong, mid-level units taking on the Greenskins, with a mix of cheap cannon fodder and elite giants, is not just plausible but is also what should happen to make these various factions interesting.

The fantasy world also manifests in the individual units. Each different one, when clicked upon, showed a range of RPG-style traits. My Dwarven Slayers, for example, possessed the Giant-Slayer ability, which meant they got a buff against the enemy Trolls and Giants. So I only used them sparingly in the initial rush, waiting for the individuals they’ll be most effective against. Previous Total War games had general systems like this, where spearmen beat horsemen who beat swordsmen who in turn beat spearmen, but Warhammer’s use of fantasy races and weapons offers this concept for all its individual units. 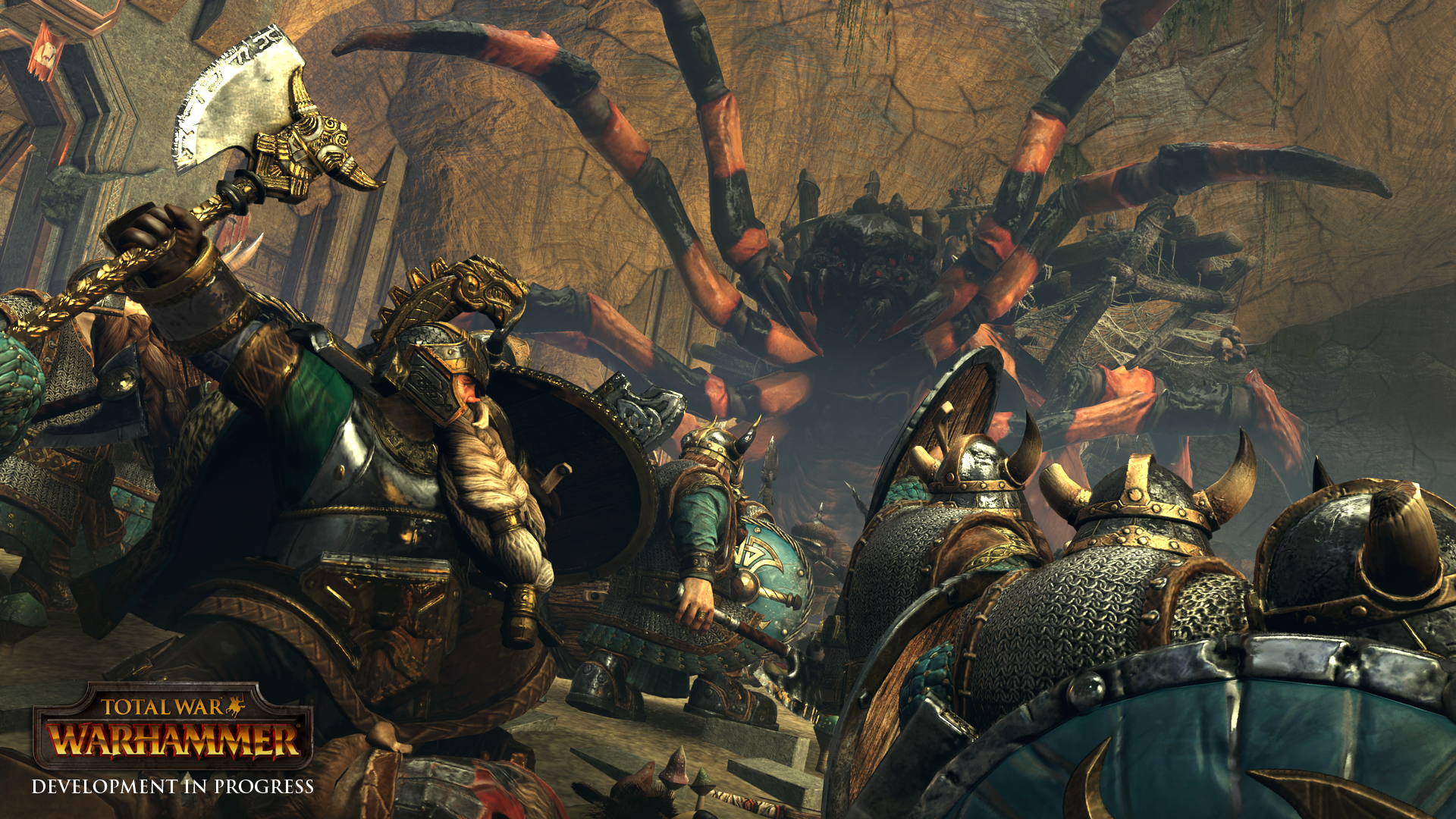 Fantasy units also forced a change in how the Total War series treated combat, according to lead programmer Scott Pitkethly. The traditional form of units fighting units didn’t work with individuals like heroes and giants, something that’s necessary for a fantasy game, especially when fighting full units. Now, the combat engine keeps track of each individual entity. This way, when the Giant fought his way into my Slayer unit, I could watch him grab an individual, bite its head off, and toss him aside. The benefits aren’t just in animation, either — it seemed to make each unit more flexible overall. For example, I had one group of elite Dwarves who were getting tossed aside by a panicked Troll coming through their ranks on one side, but the other side was holding their formation against a Goblin attack. I think a significant amount of my “feeling” that this was what Total War combat should feel like was related the flexible dynamism of this shift in the combat engine.

All this praise is not a guarantee that Warhammer: Total War will be an instant classic in the series. It was, of course, designed and balanced to be shown off (the battle I fought was a quest fight from the campaign, which seems to be a good mix of designed combat with individual campaign armies). The combat system has to feel integrated with the game at large — slow, tough, tactical battles are great up until you’re doing a hundred of them in a campaign, and that itself has to be balanced and fun, of course.

But even with those caveats, this was an extremely auspicious presentation for Warhammer: Total War. Getting the combat feeling right is arguably the most important aspect of a Total War game, and probably the one Creative Assembly has struggled most with across their inconsistent recent releases. I did not expect to be excited for Total Warhammer, but now I certainly am.