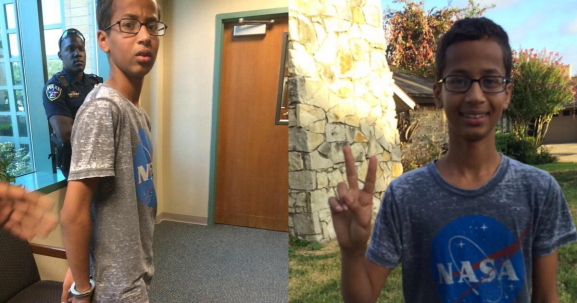 Tech companies are throwing their support behind Ahmed Mohamed, a U.S. student arrested on Monday for bringing a clock to school. The public relations frenzy blew up today as the details of the incident went viral.

Ahmed, a 14-year-old student in Texas, built a digital clock and brought it to his high school. He wanted to show his teachers, but instead of receiving praise, he was arrested. The principal called the police, having mistaken the gadget for a fake bomb.

Facebook cofounder and CEO Mark Zuckerberg was the first to show his support. He invited Ahmed to visit the company’s headquarters:

Google was next in line, asking Ahmed to visit the company’s science fair this weekend. Timely message, although delivered on Twitter, not Google+:

Hey Ahmed- we're saving a seat for you at this weekend's Google Science Fair…want to come? Bring your clock! #IStandwithAhmed

Speaking of Twitter, the company probably made the best offer of the three so far. Ahmed was offered an internship:

The three tech giants weren’t the only ones to jump on the bandwagon.

#IStandWithAhmed because we love to make things too. Never stop inventing the future. pic.twitter.com/n1ergHSTg8

Ahmed, I know you've been invited to the White House and Facebook. But, we both know you're enterprise software guy at heart. Come by Box!

Autodesk CEO Carl Bass wants to build something with Ahmed, too:

Ahmed, don’t let this stop your creativity. Come hang out at Autodesk and we’ll make something new together. #IStandWithAhmed

Ahmed’s story has resulted in a massive outpouring of outrage, praise, and sympathy. More and more people want to support the ninth grader, who was handcuffed, led out of his school, put on a three-day suspension, and interrogated by five police officers as to why he was trying to make a bomb. On Wednesday, police finally said they would not charge him.

Thank you for your support! I really didn't think people would care about a muslim boy. #Thankyouforstandingwithme #IStandWithAhmed

Support is pouring in from everywhere you look.

Cool clock, Ahmed. Want to bring it to the White House? We should inspire more kids like you to like science. It's what makes America great.

Hillary Clinton wants Ahmed to keep at it:

Hi @IStandWithAhmed ! I'd love you to join us for our science show Generator in Toronto on 28 Oct. There's a ticket waiting for you.

At what point does this PR frenzy turn into something more than just support for one boy? Ahmed did not deserve the treatment he received, but tech companies should use this as an opportunity to do something beyond extending invitations to Ahmed.

Maybe September 14, the day of Ahmed’s arrest, can be turned into an annual day of action to help fight discrimination against students and people everywhere.