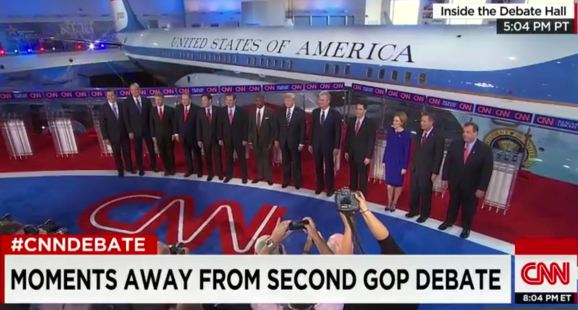 Remember when Facebook partnered with Fox News to bring you a GOP debate that was only watchable on cable?

Nobody could figure out why a cutting-edge technology giant wouldn’t offer a live stream, and CNN appears to have taken notice.

For tonight’s debate at the Ronald Reagan Presidential Library in Simi Valley, California, CNN has decided to forgo the cable provider password usually required to watch its live feed.

That means that you cable-cutters will be able to catch the debate, live and for free, on CNN’s website and mobile app.

(Even with no live stream, 24 million people watched Fox’s debate — the most successful non-athletics cable program ever.)

Just like in the previous debate, there will be a “kid’s table” debate consisting of four sad career politicians who managed to average one percent across three polls. Congratulations to them and their considerable achievements; this is definitely money well spent.

Then things get “serious” in round 2. A freezer-burned fox tail scarf named Donald Trump is scheduled to interrupt a handful of Identical White Men In Suits — a large open-faced sandwich, someone who helped ruin a company, a misguided pediatric neurosurgeon and, almost certainly, the moderators themselves.

If this sounds like a good time to you, the first debate begins at 6 p.m. Eastern and the second at 8 p.m. In addition to the website and mobile platforms, the debates will also air on CNN, CNN International, and CNN Español. If you prefer the radio (and probably remember the Korean War), you can listen here.

Also: be sure to keep an eye on #GOPDebate on Twitter — Trump is one of the most GIF-able humans alive.