A new music startup has launched with one key raison d’être: to help you learn to play piano. A product of Microsoft Ventures’ Berlin accelerator, Skoove is a personalized music tuition platform that promises “the world’s first truly interactive online piano lessons.”

Launching this week in public beta, Skoove is geared toward beginners, intermediates, or those looking to “refresh” their piano skills.

The browser-based tool serves up a library of interactive lessons, however it doesn’t rely on a touchscreen instrument — you will have to connect a keyboard or e-piano to your computer via USB. A version for acoustic pianos that utilizes devices’ built-in microphones is currently in development. 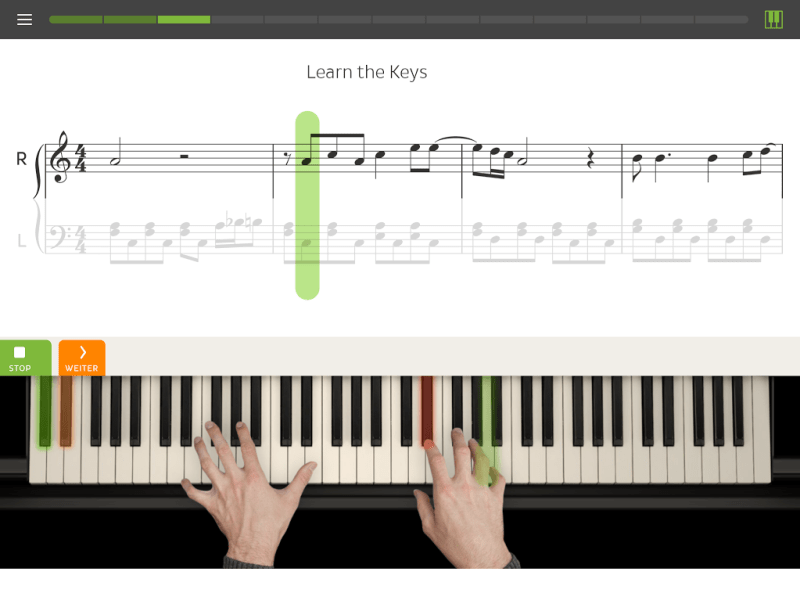 Skoove breaks down popular songs into segments, or interactive steps, listens to your playing, gives feedback in real-time, and adapts to the pace of your performance and progression.

“We have developed our own algorithm: ‘Web-based polyphonic real-time pitch validation,’ said Stephan Schulz, Skoove cofounder and chief operating officer. “This compares the frequency of the student’s input audio with the notes that should be played in order to estimate the likelihood that the student audio matches the target score.”

The Skoove curriculum was developed by Dominik Schirmer — a German-born composer, jazz pianist, and former lecturer at the Liverpool Institute for Performing Arts in England — and it’s split into a number of courses and lessons. The service is completely free during the beta period, after which it will switch to $5-10 dollars a month.

“We have designed Skoove to combine the best elements of a live tutor – giving real-time feedback and adapting to the student – with all the convenience of the Web, and at a fraction of the price,” continued Florian Plenge, Skoove’s cofounder and CEO. “61 percent of the people in the U.S., U.K., Australia, and Germany would like to learn a musical instrument, but currently only a fraction actually do.”

There have been a slew of music-tuition products and startups of late, so Skoove is in a competitive field — though this proliferation suggests there is strong demand for such services. Earlier this year, the One Smart Piano and Keyboard raised almost $500,000 via Indiegogo to take its products to market, priced at $1,500 and $300, respectively. Then there’s the $100 Keys, a portable, modular music keyboard that connects to your mobile device, which crowdfunded $150,000.

Skoove, on the other hand, is software that works with your existing equipment, and has solid backers in the form of Microsoft Ventures, and Fraunhofer IDMT, a research organization led by Karlheinz Brandenburg, who was a leading figure behind the development of the mp3 format.

Founded in August 2014, Skoove recently closed an (undisclosed) seed funding round from the High-Tech Gründerfonds (HTGF), one of Germany’s most prominent early-stage funds. It also continues to be supported by the Microsoft Ventures Alumni program.