Mobile video advertising is continuing to grow in favor among Fortune 500 brands, and Q4 will be no exception.

Already, brands are queueing up to spend more than ever this December to drive brand awareness, sales, and app installs. In fact, many major brands are expected to spend two thirds of their annual advertising budgets in Q4 alone.

Based on a recent Mobile Video Roundup report, this could translate into $1.75 billion in mobile video advertising demand over the holidays, and publisher earnings are expected to skyrocket as a result.

That is, for the publishers that are ready. To gear up for the biggest revenue quarter in mobile history, app developers need to consider these five mobile app monetization best practices:

The first step in maximizing app monetization potential is optimizing use rate, which is the percentage of daily active users of a given app who are served at least one ad on a given day. Reviewing the data from the top earning publishers on the AdColony platform this year, a strong correlation between use rate and average revenue per daily active user (ARPDAU) is found.

Grouping publishers by Use Rate deciles, a clear trend emerges: 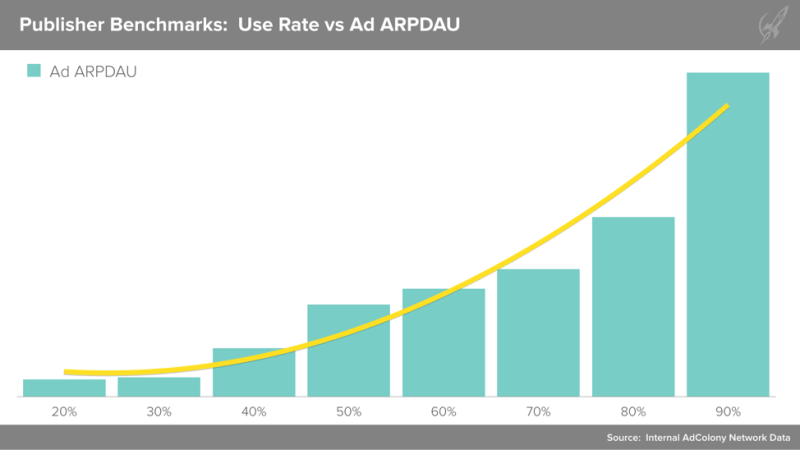 To put this data into perspective, an app with a 20 percent use rate can expect to increase its advertising ARPDAU by 182 percent when use rate is increased to 40 percent. Thus, doubling Use Rate can nearly triple Ad ARPDAU.

Why is this? Advertisers prioritize unique daily views across a larger audience over repeated ads to a smaller group. Thus, as more users of an app view a given ad once each day, eCPM for that ad placement improves, driving improved monetization efficiency.

Even if a healthy percentage of users are enabled to see ads, poor placements and integrations can limit visibility and engagement. Top performing placements are those that:

Often, interstitial and rewarded video ads have rules in place to limit the frequency that they will be offered to users. While these measures are crucial for maintaining an enjoyable user experience, it is even more critical to examine the ad timings relative to that app’s average session time.

According to recent data from Statista, the average mobile game session is only 6.8 minutes. If the timing is off, then the user may never be exposed to an ad. Alternatively, if ads are placed too frequently during a short session game, then a user may become annoyed.

The key, then, is to determine the optimal timing strategy for a given app, whether that entails interstitial value exchange video ads triggered to extend the session or in-feed placements that respect a feed-based environment.

Offering a variety of enticing rewards is critical for driving improved engagement and ad consumption. For instance, apps that offer a mix of in-app currency and consumable rewards enjoy a 145 percent higher ARPDAU than comparable apps only offering currency rewards. 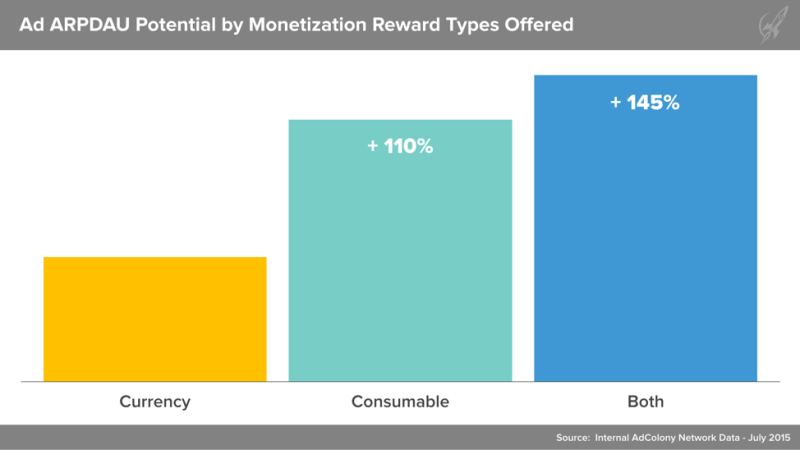 Once the reward types are determined, publishers need to add a sense of urgency to the promotion. Consider limited time offers that tie in with the season or moment. The publishers who are most successful at monetizing through value exchange video ads offer rewards that consider:

5. Sit down with monetization partners

So often, established publishers wait too long to meet with their monetization partners to discuss performance, areas for improvement, and new tools that may be at their disposal.

Meanwhile, new publishers often struggle with where to start. That’s why we’ve recently unleashed a program to encourage our new publishers to prepare for Q4. Those who go live by October 1st will have ample time to meet with monetization experts to optimize their integrations before the holiday rush hits.

Of course, even without promotions, mobile app publishers can expect record breaking revenue in Q4, particularly those publishers who take the time to optimize by October 1st.