Windows 10 is out, and Razer has rejiggered its high-end Blade gaming laptop to take full advantage of the operating system.

To test things out, Razer sent GamesBeat a $2,400 14-inch Razer Blade, which is available for purchase now. This configuration comes with an Intel Core i7-4720HQ processor, a Nvidia GeForce GTX 970M graphics chip, and 16GB of RAM. And all of that power is necessary to push the nearly 6 million pixels in the Blade’s 3,200-by-1,800 super-sharp touch-screen display.

The PC came loaded with Windows 10 — just like it will for anyone who goes out to buy one today. And while the specs above are impressive, I was much more interested to see what it’s like to live with a machine like this.

My findings? It’s a beast.

The first thing I noticed when I dragged the laptop out of the box is how solid it feels.

My primary computer is the excellent Gigabyte P34G V2 gaming laptop. I’ve really liked that notebook, but it feels cheap in comparison to the Blade. Its materials are all solid and feel nice to the touch. This includes an aluminum body that does an excellent job of convincing you that you’re getting your money’s worth. Everything is seamless, and when you pick up the laptop with one hand, it never feels like it’s bending or creaking. When you’re investing in a device like this, that’s something that you want. 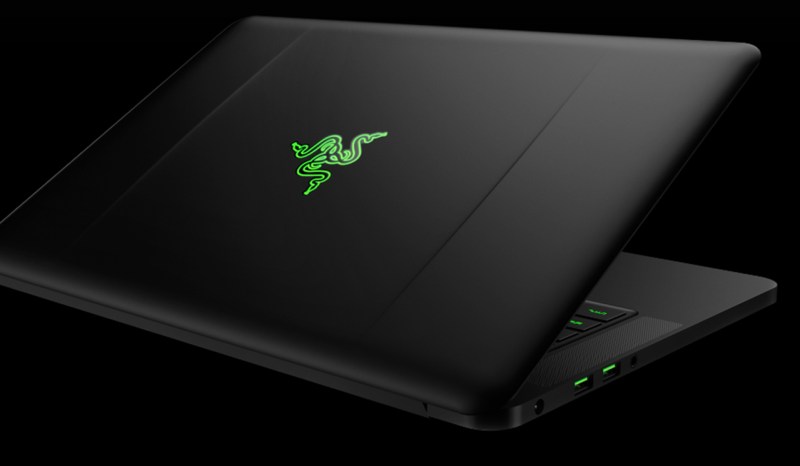 Above: It’s a good-looking laptop, and it feels great as well.

Likewise, you want a screen that’s not gonna get all mucked up after a few days of use, and that’s what the Blade has here with its glass-covered IGZO display. Smudges and marks don’t show up unless you’re really looking for them. That’s important, because it makes the touch screen more welcoming.

The build also benefits from a reliable keyboard and trackpad. I never feel like these devices get in the way of my gaming or my productivity even if they aren’t perfect. Yes, I wish the keys had more travel and that the trackpad’s buttons felt a little more satisfying to press, but these are minor quirks. Overall, I don’t remember having any specific problem typing or piloting the cursor.

After getting over the look of the device, I booted it up; everything ran smoothly. The strong innards ensure that few programs can hold this thing back.

Over the last few weeks, I’ve used the Blade as my main work machine. That means two to three dozen tabs open in Chrome with maybe Adobe Premiere or Photoshop running the background. And all of that worked beautifully, and it all was just as responsive as I was expecting it would be.

Windows 10 should get some of the credit here as well. It’s an OS that benefits from having a beefy system, as it was built for multitasking. But the hefty amount of RAM and the powerful i7 pull their weight as well.

Touchscreen works even better with Windows 10

Speaking of Windows 10, it definitely benefits from running on a system equipped with a touchscreen display.

A touchscreen was a hard thing to come by on a thin gaming laptop even as recently as 2014. That’s when I bought my Gigabyte, and it just didn’t seem like that was an option. But Razer has stepped up in 2015 with its latest Razer Blade, and the timing worked out.

Windows 10 ensures that the touch interface makes sense. You can reach up and drag things around with a finger when you want to, but the OS doesn’t try to force you into those weird modern-style apps. Everything just works like the desktop did on Windows 7 with the added benefit that touch will respond in a predictable and useful way.

The only drawback here is that with a 3K resolution, buttons and icons all look a little small. That occasionally made them hard to hit with my stubby fingers. I tried to fix this by scaling Windows, but that caused a few problems with other programs. So I ended up just living with it.

It’s a hell of a gaming machine

But let’s get real here. You get a machine like this so that you can game on the go, and the Razer Blade is more than capable in this area. I came to this conclusion after firing up The Witcher III: Wild Hunt and finding myself blown away at how great it looks and runs.

I’d like to give a little credit to the Nvidia Experience app here as well. I love the “optimize” feature that will let you get a game running with all the best settings for your rig. I don’t want to take the time fiddling with options and combinations, and when I downloaded a few games, it showed me exactly what I could expect from Grand Theft Auto V, Rocket League, and The Witcher 3.

I was shocked to find that Nvidia thought I should run The Witcher at a 2K resolution. I looked a bit closer, and found out that wasn’t necessarily true. While yes, this machine could handle that, most of the settings were turned way down. But setting the resolution to 1080p enabled me to turn on most of the effects in CD Projekt Red’s latest opus.

And boy does that run well.

I wasn’t really expecting a mobile chip like the 970M to have the guts to handle The Witcher in any satisfactory way, but I would legit have zero problems playing through the entire game this way. That’s how good it looks and plays.

It was the same for GTA and Rocket League. Hell, GTA V actually runs really well at a 2K resolution with most of the graphics settings turned up.

This is like having a portable gaming device that puts the Xbox One and PlayStation 4 to shame.

When you have this kind of power in a small package, the biggest enemy is — as always — heat. And yes, the Blade runs hot.

This is a problem if the only service you have is your lap because wearing shorts will ensure your legs get a brand that looks a lot like the underside of a Razer Blade. 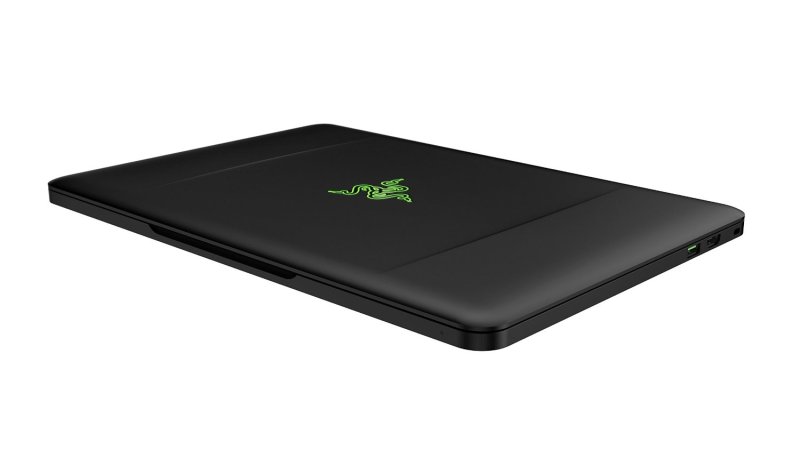 Above: Small and sleek, but with a molten core at its center.

I also don’t advise setting this machine on a soft surface, like a pillow resting on your lap. That will cover up all of the exhaust ports, the laptop will get even hotter, and then it will shut down. That’s never fun.

One time, the machine got so hot (again because of misuse with a pillow) that it froze up and I had to hold down the power button to force a hard reset. The button was so hot that I had to consciously ignore the intense pain on the tip of my finger so that I could hold it long enough to cut the power. That sucked.

I know that this is the exchange we have to make to have a laptop that runs GTA V at 2K resolution without breaking a sweat, but it’s still a negative.

The 3K screen is overkill

As I mentioned, most graphically intensive games ran best at 1080p even if a lot of them ran just find at 2K. But in this give and take, I’ll usually take the frames the details over the higher resolutions. And I don’t think I’m alone.

So for gaming, a 3K screen is overkill.

And I also noted that the icons are a bit small in Windows when you run at the full 3,200-by-1,800 resolution. The same is true for text. Sure, I can scale all those things, but that almost defeats the purpose of the high-def screen. And most sites and programs, both on the Web and in apps, are not designed with ultra-high definition in mind.

So for productivity, 3K is overkill.

And video services aren’t exactly overflowing with quality ultra HD content … unless you like watching rich people overuse slow motion and filters for their vacation videos.

So yeah, 3K is overkill.

While the Blade does have a small profile, it’s as dense as uranium.

This thing feels like every bit of its nearly 5 pounds. That may not sound like much, but it’s 20 percent heavier than my Gigabyte P34V, and that laptop has a 1GB hard drive that doesn’t come with the Blade (it only has a 256GB SSD). You’re going to know when the Blade is in your bag.

In addition to its mass, the aforementioned heat problem means that this baby also runs loud. A pair of fans on the bottom vent the heat, but they need to work constantly anytime you are running a game. That means you’ll want some headphones — otherwise you’ll have to have the system’s admirable speakers do battle with the incessant whirring to hear things like dialogue and audio cues.

I really like this category of notebook. A gaming PC that you can take with you is something that can find a lot of use in a lot of different situations. You can rig it up to your family room television for a console-like experience or couch co-op games, and it’ll handle all of that no problem.

And the Razer Blade definitely feels like the laptop to beat if you’re looking for a super portable gaming system. You’ll pay a premium, but paying that price will get you something that’s built with quality and can handle any game on the market today.

Razer provided GamesBeat with the Blade laptop on loan for the purposes of this review.