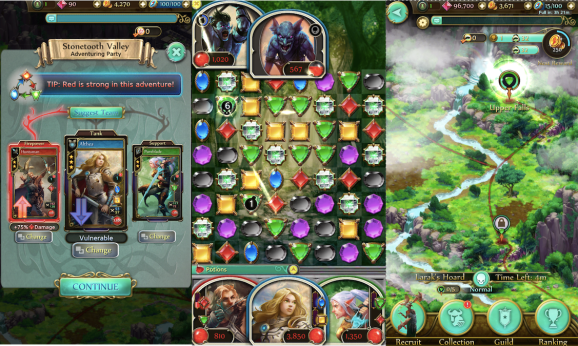 Get ready for puzzles and glory in ... Puzzles & Glory, hitting iOS and Android later this year.

The makers of one of mobile gaming’s biggest success stories are ready to follow up on their 2013 hit.

Sega and Demiurge Studios, the makers of Marvel Puzzle Quest and Shoot Many Robots, announced the upcoming match-3 role-playing game, Puzzle & Glory. It launches worldwide on iOS and Android soon (Sega didn’t provide any more details on a time frame).

This type of game continues to be popular, since Puzzle Quest first merged RPGs and match-3 on the DS and PSP in 2007.

“Puzzle & Glory will challenge players to master the art of immersive match-3 tactical combat and require deep strategy to defeat fearsome enemies backed by a cunning A.I. system,” Sega said in a press release today. “Players will set out on spectacular adventures to save their homeland of Aetria from the Blight, assemble teams of heroes to fight battles, and receive extraordinary rewards along the way. Players can create their own destiny by exploring multiple paths to victory, as well as join guilds with friends and allies to compete for rare rewards.”

Puzzle & Glory is free-to-play, with optional in-app purchases. Players who are interested in the game can pre-register today and get a rare card — Mercy, the Winged Warsteed. It’s probably some type of pegasus, if I were to guess.