The day of the multiplayer online battle arena (MOBA) in mobile gaming has arrived. So says Spacetime Studios, a startup that is releasing Call of Champions today after more than two years of development.

Like Super Evil Megacorp’s Vainglory that preceded it, Call of Champions is a big test as to whether the lucrative MOBA category on the PC — played by more than 140 million people a month, according to market researcher Super Data — will spread to mobile, which has become one of the fastest-growing categories for games, with expected revenues of $30 billion in 2015.

As previewed earlier this year, Call of Champions is streamlined for mobile devices, with just two lanes of combat compared to five for League of Legends, the dominant MOBA on the PC. It is a free-to-play game debuting on iOS devices. The goal is to destroy the enemy’s fortress before five minutes expire.

Vainglory, one of our top 10 original games of 2014, has done a good job growing its audience in the mobile esports category. But Vainglory matches are at least 20 minutes long. By contrast, Call of Champions matches last just five minutes, said Cinco Barnes, the founder of Austin, Texas-based Spacetime, in an interview with GamesBeat at the recent Esports Conference in San Francisco. 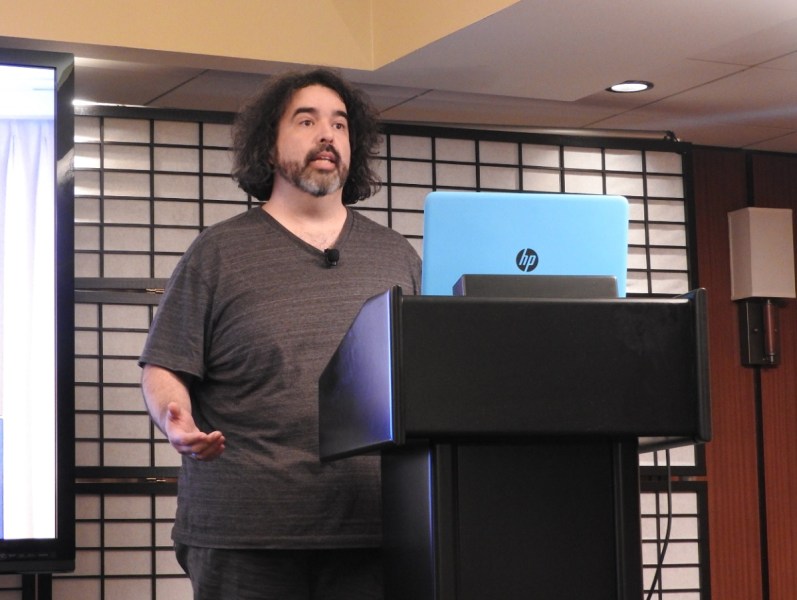 Above: Cinco Barnes of Spacetime Studios at the Esports Conference.

The game was designed with help from fans of MOBAs, such as famous Twitch livestreamers and pro esports players, Barnes said.

“These people have a lot of fans, and that figures into our marketing,” Barnes said.

Barnes likens Call of Champions’ short rounds to MMA, which has much shorter fight times compared to boxing matches. The game has a spectator mode that positions it nicely as a competitive esport, where players can compete against other pros for prizes or money.

“We wanted to enable spectating and cool visuals for people who are watching,” Barnes said.

Barnes founded Spacetime along with Gary Gattis, Jake Rodgers, and Anthony Sommers. Since 2005, they’ve worked on big projects for NCSoft, Electronic Arts, Microsoft, and Sony Online Entertainment. Spacetime has more than 50 employees. The company had small investments from NCSoft and Insight Venture Partners along the way.

“This phase of the game started last year, but the intellectual property began a few years ago as a strategy game,” Barnes said. “The strategy game was beautiful, but it wasn’t as fun as it needed to be. So we changed it.”

The touch-screen game has a tutorial that runs through how you play. There are two teams, two lanes, and two fortresses. Both lanes have orbs in neutral spots. Those orbs replace the minions, or artificial intelligence characters, in traditional MOBAs. Your job is to push the orbs in a kind of tug of war toward the enemy fortress. You can push it back. Each team only has three characters, each controlled by a human player in simultaneous gameplay, or real time. 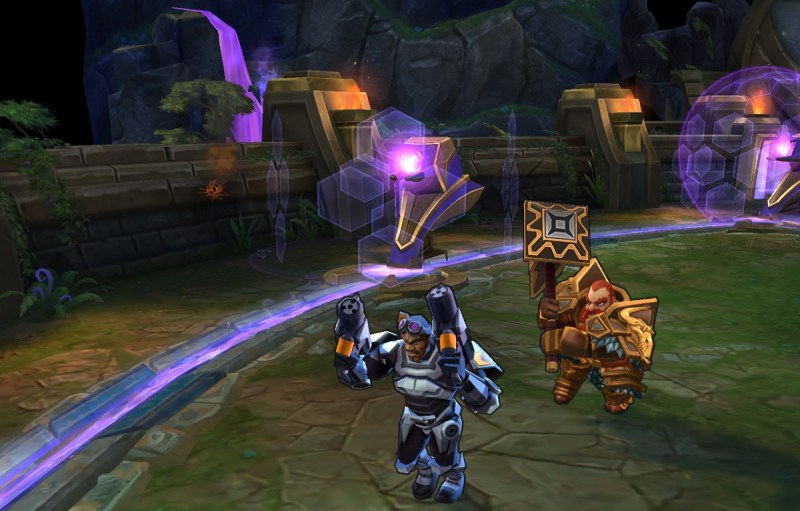 Above: Call of Champions has two lanes of combat.

Call of Champions has random power-ups that give you speed, damage protection, or armor. If you go into the center of the map, where there’s an altar, the protection goes to the rest of your teammates as well. The challenge is multitasking. You have to pay attention to the orbs, protect your fortress, and attack the enemy players — all at the same time. Each of the 16 champions has 10 tiers of advancement.

There’s a lot of competition, but Barnes is OK with that because his team has thought this project through for a long time. Every player makes a difference, and there are a lot of exciting last-minute outcomes.

“I wanted to make this game years ago, and we talked ourselves out of it,” Barnes said. “I think that the success of Vainglory is going to inflame a lot of developers to move into MOBAs because they believe they have the secret sauce. We do, too.”

He added, “No one has the time limit and the absence of the minions. There’s no abstraction of player versus the environment. It’s me versus you. It’s much more interpersonal and intense.”

The five-minute challenge enables people to fit the game into their busy lives, Barnes said, and play it anytime, anywhere. Compared to Vainglory, Call of Champions has no item shop where you purchase upgrades. And there’s no jungle where players can ambush each other.

Getting the game to move fast is a huge challenge. Spacetime developed its own engine to do it.

“Our team has optimized this code for mobile really, really well,” Barnes said.