Facebook has filed a patent for a new way to ascertain the digital signatures of cameras from photographs and then associate it with users within a social network. The application notes that the association of camera with users can be used “beneficially for the social networking system” for things like recommending potential connections, events, or groups to users, detecting fraudulent accounts, and even determining affinity between users.

Above: Flowchart of a process for creating associations between cameras and users and between users of a social networking system, in accordance with one embodiment of the invention.

First spotted by Imaging Resource, US Patent Application 20150124107 was filed by Facebook software engineers Daniel Muriello, Stephen Heise, and Jie Chen. The premise is that a social network could analyze images uploaded by a user to determine the digital signature of the camera that took them.

Why is this important? The signature could have characteristic information about the camera that the system could then use to associate users with that device. This could be done through interactions or connections to the image, whether it’s being tagged, commenting, liking it, or anything else.

Other areas that might interest a social network could be determining if there’s a connection already stored in the system. Should a pre-existing relationship not exist, the system could send a request to match two users together — all based on data extracted from a camera.

It’s believed that every day, Facebook users are uploading 350 million photos, and there are 250 billion photos already on the social network. Personally, I take a lot of photos at parties and events I attend and don’t have the energy to tag everyone in them, even the strangers. So what could theoretically happen is Facebook (or any social network) could determine the camera I have (Canon 7D) and then suggest other users who use this technology, and we’d go further down the proverbial rabbit hole in finding new ways to connect with more people. 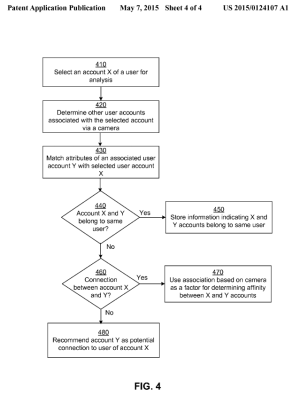 Flickr already has the ability to determine what camera is used to take a picture by reading the EXIF data, but what it seems to lack is the behind-the-scenes system that matches you up with other users. I can go into Flickr and find other photographs that were taken with the same device, but I’d have to do it reactively.

Patenting this technology is a benefit for Facebook as it offers some defense against other social networks that want to better leverage photos on their sites, whether it’s Pinterest, Flickr, Twitter, or whoever. And it could certainly be applicable to Instagram as well.

Although Facebook did file this patent, there’s nothing to suggest that the company has implemented this technology or plans to do so. One would think that if this was already done, users would have to be notified because of the privacy concerns that are sure to be raised.