Linkedin is one of the most successful Web 2.0 companies in history — but it’s success stops short when it comes to mobile.

LinkedIn’s main mobile app has long attempted to do everything its web product does: the network, profile, feed, search, and messaging functions. However, this wide focus within one app means that none of it is well executed. Anyone who has used the LinkedIn app before will know what I’m talking about.

To its credit, LinkedIn does seem to want to reimagine its mobile offering, as explicitly stated in its latest earning announcement, and is actively experimenting with an “app constellation” strategy (like Facebook), with apps like Job Search, Recruiting, Pulse (news) and its newest app, Elevate. Unfortunately, none of these offerings has gained the kind of traction you’d expect for a company the size of LinkedIn.

Download numbers for most of the LinkedIn apps are surprisingly low. In addition, the LinkedIn main app does not drive installs or engagement (via a deep link) to any of the other apps. It is a completely broken and incomplete experience. 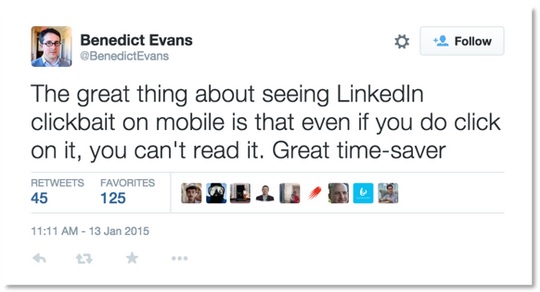 Let’s take a look at how LinkedIn addresses some of its major company pillars on mobile:

Talent Solutions is the LinkedIn division that connects job seekers and employers. It is LinkedIn’s #1 revenue source ($443 million in Q2) – but you wouldn’t know that if you use LinkedIn through your phone. 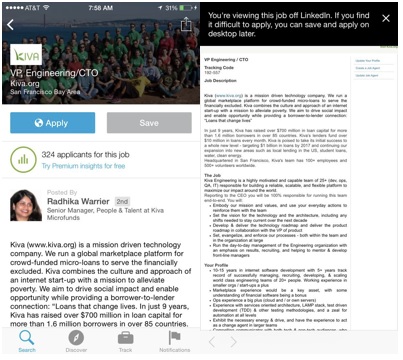 For example, the LinkedIn Jobs app makes it very difficult to apply for jobs on mobile. You can search and save opportunities, but closing the deal via mobile is hard – sometimes it lets you apply on the app and sometimes it drives you back to the desktop. When you click the “Apply” button, you’ll see a message like this one: “You’re reviewing this job off LinkedIn. If you find it difficult to apply, you can save and apply on desktop later.” This is a massive opportunity, wasted. Compared to offerings like Switch, which connects job seekers and employers with a simple Tinder-like swipe, LinkedIn’s job search feels like it’s from the Stone Age.

The other app in the Talent Solutions family is the LinkedIn Recruiter app, which has 250,000 installs across iOS and Android. Although reviews are scathing across both the App Store and Play Store, the Android version has not been updated since July 2014 and is plagued with issues like the inability to scroll. Meanwhile, on iOS, the app has not been updated since March and has a grand total of three one-star reviews – enough said.

In general across the Jobs and Recruiter apps, as well as others in the LinkedIn constellation, there is no effort towards a seamless experience. If you are logged in on the main LinkedIn app, you’ll still have to log in on every other app. There is little to no automation, delight, or serendipity playing out across these apps.

Marketing Solutions (a.k.a. advertising) represent another substantial — 22 percent – chunk of company earnings. Unfortunately, once again, LinkedIn is missing the boat on mobile-optimized ads units or targeting.

Mobile is growing at twice the rate of other platforms for LinkedIn, but revenue from display ads is down 30 percent year over year. With half of LinkedIn’s traffic flowing through mobile, and advertiser demand for quality mobile advertising channels as high as ever, you would think that optimizing ads for mobile would be a major focus. To test out what the company’s ad platform is capable of, I went ahead and test-drove the entire process. I found that with LinkedIn ads it is not possible to drive app installs, ad units can only be created and targeted for the Web, and it is not possible to discern whether traffic/conversions are coming from mobile. In short: complete fail.

Lastly, as a general observation, LinkedIn is not using any of its social network data outside of its own network – which is where its data may be of great value to business-focused publishers and other similar companies. There is a ton of potential, but LinkedIn still has a long, long way to go in the mobile advertising realm. Perhaps it should emulate Twitter and buy an advertising marketplace like MoPub?

Messaging and communication is at the heart of everything that makes LinkedIn valuable … and it is also the company’s weakest aspect across the entire company ecosystem. Per its Q2 announcement, Messaging is one of the company pillars, yet it remains unbelievably clunky. If you are a LinkedIn user, you know what I mean. Lucky for us, LinkedIn recently announced a new version of its messaging feature including GIFs, emojis and stickers. We will see how these new features will change LinkedIn user behavior versus a modern messaging solution like Slack.

In the newest LinkedIn app, called Elevate, you cannot even create a new message from within the messaging tab. You have to search for a profile and then choose to message them from the profile view. Insane.

If LinkedIn is not careful, Slack could have the opportunity to strip away the most important value proposition for LinkedIn: for professionals to network and communicate effectively with one another. LinkedIn should learn from Facebook and build or buy a separate, full-fledged messaging app. At it is making some moves in the right direction.

Wrapping this all together, LinkedIn has built apps piecemeal to fit its Web 2.0 offering, rather than embarking on a mobile-first re-imagining of what the service should look like.

The current mobile strategy does not reflect LinkedIn’s increasing reliance on mobile traffic and engagement. Most of the five pillars are inconsistent across the app constellation. LinkedIn must rethink its mobile strategy or risk being left in the dust by enterprising companies like Slack, Switch, etc. I see it two ways: LinkedIn can go the Facebook route and continue to rebuild or acquire new apps to fit into a new app constellation, in which case each of its apps must be well designed, useful, and complete as a standalone app and be deep-linked with its other apps. Or, it can follow WeChat and create a robust all-in-one experience – which will only be possible once it clarifies and slims down its value proposition for users.

At this point, LinkedIn is still very far behind in mobile.

Edith Yeung is a partner at 500 Startups‘ 500 Mobile Collective. She was previously VP of business development and marketing at Dolphin Browser.

Updated on September 19: A previous version of this article incorrectly attributed some LinkedIn download stats to App Annie. These numbers have been removed.