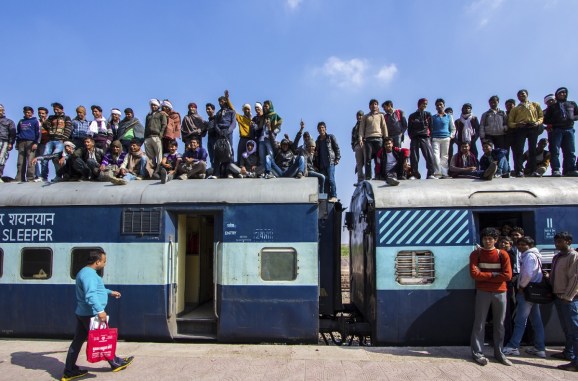 If you’re looking for growth in mobile games, India is the place.

In 2008, Apple launched the App Store, changing the game market forever. While in hindsight it would have made perfect sense to immediately launch games on mobile, it wasn’t so clear-cut for companies at the time. Facebook games had just taken off, and Sand Hill Road/Wall Street darlings like Zynga, Playdom, Playfish, Kabam, and Kixeye were generating hundreds of millions of dollars in revenue from Web games.

At the time, investing in a new and unproven platform didn’t seem like the best choice for an established and fast-growing company. King was one of the first Web game companies to pivot the business and focus on mobile by launching in 2012 what, to this day, is one of the most polished mobile games available — Candy Crush Saga. Earlier that same year, Supercell, a company focused solely on the mobile platform, also launched its superbly polished Clash of Clans, securing its lead in midcore market.

However, the Western mobile game market appears to be maturing, and companies looking for growth must explore new green-field opportunities. (Ed. Atul Bagga will be moderating a session with Reliance Games’ Amit Khanduja at our GamesBeat 2015 conference on October 12 and October 13 in San Francisco).

India offers a great green-field opportunity for mobile game developers. Currently at about $200 million, the Indian mobile game market is at an inflection point with market size expected to grow to $3 billion by 2019, driven by growing smartphone penetration, and evolution of mobile payment infrastructure.

India’s smartphone installed base expected to reach 650 million units by 2019, up from 140 million in 2014; it’s driven by a large mobile subscriber base (900 million, or three times the size of the U.S.), a shift from feature-phones to smartphones, increasing smartphone affordability, and new business friendly government.

The demographics of the nation, most of all, make it ripe for the game industry. India’s young population (median age at 26), highly skewed wealth distribution, and limited entertainment options make it a near carbon copy of the early-2000s Chinese market, which proved to be a gold mine for PC game industry. 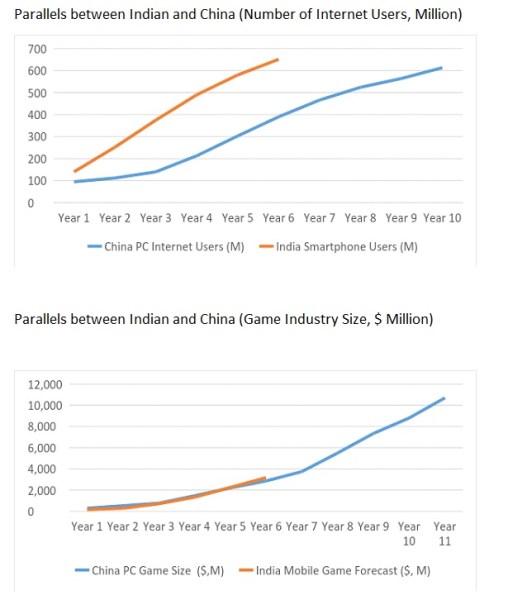 Above: Parallels between India and China. Sources: World Bank, iResearch, Cisco VNI report, and my estimates.

A sanity check on my market size estimate for Indian mobile game market.

Per device monetization for mobile games is currently $42 per year in South Korea, $24 per year in the U.S., $10 per year in China, $9 per year in Russia, and $7 per year in Brazil. A notably bigger chunk of game dollars in these countries go towards console (in the U.S.) and PC (in China, Russia, Brazil, and Korea). Given the miniscule PC and console penetration in India, it is fair to assume that most of the game dollars will be spent on mobile. At $3 billion, Indian mobile game monetization translates to $4.7 per year, meaningfully lower than any of the benchmarks despite little or no competition from other segments of video games. 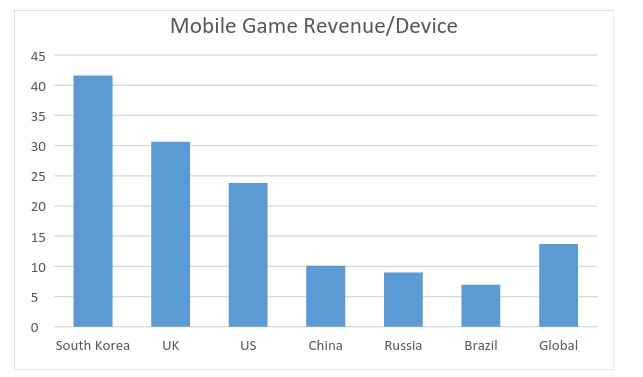 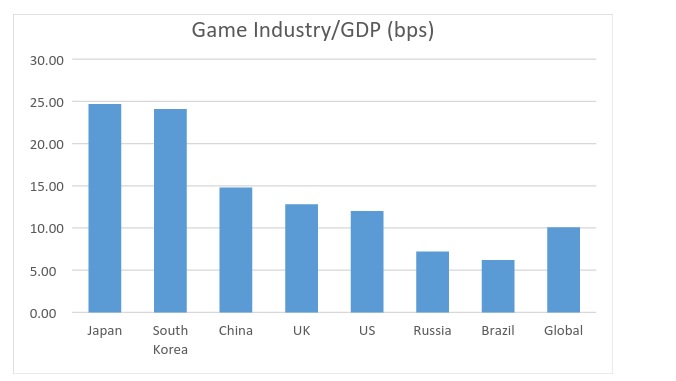 Above: Global games market. Sources: Korea Creative Agency, Newzoo, J’son & Partners, iResearch, eMarketer, IDC, World Bank, and my estimates. *India data based on estimate for the year 2019, other countries based on estimates for 2015.

When I tell the Indian story, these are the most common things I hear:

But Indians don’t play games! One could have made the same argument for China in early 2000s before the rise of PC games and would have been proven wrong by a mile. Games have been a part of the Indian culture for centuries and are still important part of our culture (have you heard of … ummm, cricket?). Video games have been slow to take off mostly because of limited PC and Internet penetration in India. Mobile is changing that, and India is likely get its share of video games players, just like China and the rest of the world.

OK, Indians might play but they don’t have capacity to pay and therefore games won’t monetize! Once again, people made the same argument about China during the early stages of game industry growth and were proven wrong. Indians are already spending money on pirated games — you only have to visit any Indian shopping complex to see a number of kiosks selling pirated games DVDs, bustling with young and enthusiastic gamers. Even assuming that Indian gamers will spend 25 percent to 50 percent of what players in other emerging economies spend, Indian mobile games could be a multibillion dollar market over the next couple years.

But there is no payment infrastructure! While it is true that online payment structure isn’t fully developed, the state of online payments is changing very quickly. The government is aiming to provide bank accounts to masses (15 million new accounts on the first day after policy announcement), and debit cards, online banking, and mobile wallets are gaining traction among Indian consumers. There is already a strong distribution network for prepaid mobile recharge cards which could easily be used to distribute prepaid game cards. In the short-term, carrier billing could emerge as the most viable payment option.

While investors have had less than spectacular returns from game investments in the West, India is likely to be different from Western markets and more similar to the Chinese PC game market. Unlike in the West, where video game was already a $40 billion industry and investors were mostly betting on a market share shift, the game industry in India is still at a nascent stage approaching an inflection point of growth, similar to China’s game industry during the early days of Internet penetration. It is clear the Indian mobile game market is set to grow explosively over the next few years.

All that remains to be seen is who will emerge the Tencent, the NetEase, the Shanda and be Maharaja of India games.

Atul Bagga was most recently the CFO for Zynga Asia. Prior to Zynga, Atul was an equity research analyst covering digital media and Internet with Lazard Capital and ThinkEquity. He’ll be moderating a session with Reliance Games’ Amit Khanduja at our GamesBeat 2015 conference on October 12 and October 13 in San Francisco. Twitter: atulbagga; Linkedin: https://www.linkedin.com/in/bagga.