Commuter ride service Chariot has released an update to its iOS app, which now offers a seat reservation feature and real-time arrivals. These changes come in addition to newer routes within San Francisco that the company says are crowdsourced from its customers. 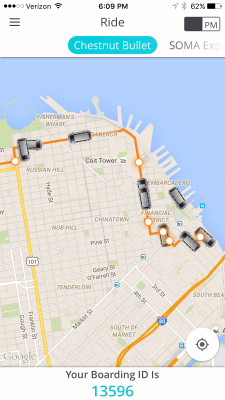 If you’re trying to get to work within the City by the Bay, you have many options, including public transit, taxis, Uber, Lyft, and, of course, Chariot. The Y Combinator-backed company has an army of 15-passenger vans that transport workers between residential areas, their offices, and commuter hubs like CalTrain and the Bay Area Rapid Transit (BART) stations.

Chariot said the new changes should help make commuting a lot easier. Starting today, riders can place a reservation for a seat on any available vehicle (within 30 minutes of arrival). The app will display real-time arrival estimates. It’ll also list the names of the drivers and let you message them directly.

A company spokesperson told VentureBeat that Chariot’s seven routes are operating with a 97 percent on-time rate and at 50 percent capacity. It seems that there’s still plenty of room for more passengers and growth. The average price is around $4 per ride — a little more than it would cost to ride the MUNI public transit bus.

“Chariot takes the pain out of commuting by making the process as reliable and hassle-free as possible. Allowing reservations and showing real-time arrival furthers that mission,” said Chariot chief executive Ali Vahabzadeh in a prepared statement. “With Chariot, everyone gets a seat, prices are flat and stops are minimal. It is the best way to get between home, work, and major transit hubs…” 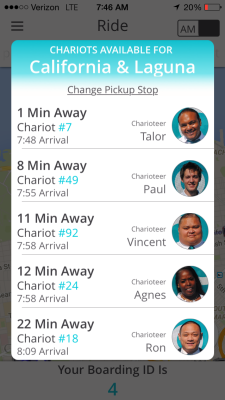 While providing yet another way to get around town can be great for riders, the services have met with criticism from the community. Some feel that Chariot, and others, such as Leap (which recently found out how difficult it is to operate in San Francisco), are a nuisance. Chariot is believed to be working with community leaders and city government officials to remedy any issues.

One of the reported benefits of Chariot is that it can reach parts of the city underserved by public transit. Commuters living in San Francisco know that MUNI or taxi are the only options at times, and even then, arrivals are sketchy at best. But Chariot wants to provide a reliable alternative, and is leveraging data to find out where new routes are needed in real-time. It says that new routes are ‘crowdsourced’ and selected based on the number of votes cast on the company’s websites.

Update: This article has been updated with new occupancy and average price per rider figures provided by Chariot. The previous numbers were incorrectly provided to us by the company.