It’s estimated that the 3D printing market will grow to $16.2 billion by 2018, a compounded annual growth rate of 45.7 percent over the five-year period. One company eagerly looking to capture more of this market share is Formlabs, and today it has launched a $3,499 next-generation 3D printer that offers better resolution, bigger prints, improved connectivity, and more.

Nearly four years ago, Formlabs broke onto the scene with a Kickstarter campaign where it raised over $2.9 million to bring its Form 1 printer to the market. This time, the company has rebuilt its product from the ground up, something Formlabs cofounder Maxim Lobovsky said they’ve always dreamed of doing. 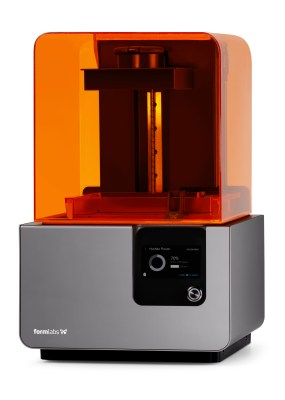 The Form 2 printer has at least a few new improvements, including 8GB of memory, Wi-Fi support (no longer will you need to directly connect to the printer), a streamlined interface that features one-click printing, a better touchscreen display with diagnostic readouts, new cartridge types, and better quality control features.

Formlabs says its new product will have 40 percent bigger build volume than its predecessor, the Form 1+, and a laser that is 50 percent more powerful.

Lobovsky and the company’s head of global marketing, Colin Raney, told us that the Form 2 printer will let commercial businesses produce items faster and at a much larger scale (which happens to be a trend pundits have been on the lookout for). They claim that to have this level of technology in a 3D printer before, companies would pay up to $20,000, but now it’s the price of a laptop.

“In the last six months, we’ve seen that printers are hitting their limits on how people are being entertained,” said Lobovsky. “People are looking for professional machines.”

Formlabs isn’t alone in the marketplace, as it competes with MakerBot, Carbon3D, 3D Systems (which sued Formlabs in 2014), and others.

To encourage customers to upgrade to the Form 2 printer, Formlabs is offering up a discount: $400 off for those with the Form 1 printer, and if you’re a Kickstarter supporter, you’ll get $600 off. The company said that it’ll be following up directly with customers, and this promotion would likely last through the end of 2015.

The Form 2 printer is available worldwide, sold directly through Formlabs’ website. Each printer includes a one-year warranty, as well as a copy of the company’s PreForm software, one liter of resin for printing, and a finish kit for post-processing needs.