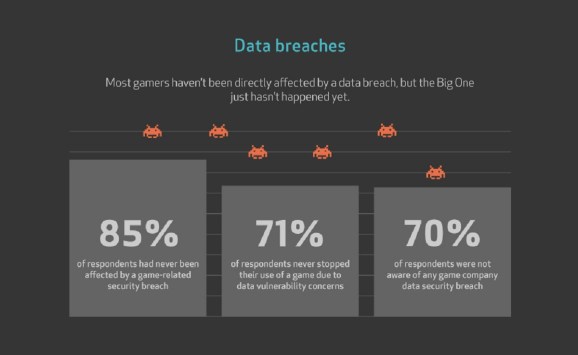 Most gamers haven't been affected by a data breach yet.

The majority of gamers lack confidence in game developers’ ability to ensure security and safe play, according to a survey by backend service PlayFab.

The findings showed that 83 percent of players believe that game developers should be responsible for securing a player’s personal data, but fewer than 40 percent said they feel confident with current safeguards. That’s not surprising, considering security breaches that have taken place across the industry, such as the infamous hack of the Sony PlayStation Network in 2011, when hackers stole identify information for 77 million players.

Seattle-based PlayFab surveyed more than 500 people who play video games more than four hours per week. About 86 percent of players expressed concern about protecting personal data on the Internet, but data security was one of the lowest priorities for players when making game purchase decisions.

Despite the steady succession of high-profile data breaches over the last year, many businesses and consumers are still not taking appropriate measures to ensure proper security online, PlayFab asserted.

A 2014 study by Ponemon Institute and IBM found that the average data breach in the U.S. costs $5.9 million, or $200 per breached record, an impact that could be detrimental to the viability of a game studio or publisher experiencing such an event. An earlier Ponemon study estimated the cost of Sony’s 2011 data breach at $318 per person or $24 billion.

These threats are compounded by the growth of the live games space and the resulting increase in game companies that store their users’ personal data, presenting the need for developers to strengthen their security measures.

“Data breaches continue to plague businesses across the globe, and the games industry is not immune to these attacks,” said James Gwertzman, co-founder and CEO of PlayFab, in a statement. “These survey results underscore both the opportunity for game developers to improve trust by focusing on security measures and the importance that they do so to safeguard an audience that relies on them. PlayFab plays a role in this by giving developers a battle-tested, secure backend that makes it easier to protect players’ private data.”

When asked about the security of their game accounts and experiences, more than 80 percent ranked either personally identifiable or financial related information as the most important thing to protect, while system speed and performance rated as the least important by nearly 40 percent, and in-game data and achievements were rated least important by more than 20 percent.

Most respondents had minimal experience with compromised data. Only 30 percent were aware of data breaches that had affected the games industry, and 85 percent had not experienced a game-related security breach; 71 percent indicated they had not ever discontinued use of a game due to security vulnerability concerns, further highlighting a lack of alertness to potential risks.

The majority of participants — 55 percent — either view desktop/laptop as safer than other platforms or believe all platforms to be roughly equal in terms of security, which shows a disconnect from the reality of the landscape.

Around the world, PlayFab is being used by more than 300 titles in active development and 10 million total players registered. Since March, PlayFab has seen a nearly 90 percent increase in new titles adopting its platform. In June, the company launched PlayFab Free Tier, granting game developers unlimited free access to some of the most popular elements of its backend game operations platform.