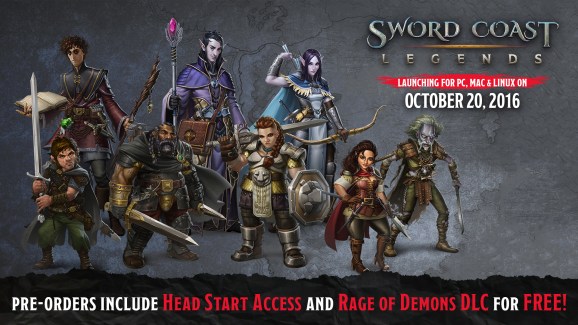 Everyone, get in here ... a little late.

Looks like I’ll have to wait another month before throwing my friends into a spider-infested Mind Flayer lair.

Developers N-Space and Digital Extremes announced today that Sword Coast Legends, the first true Dungeons & Dragons-based computer role-playing game since 2008, will now release on October 20 for PC, Mac, and Linux, with PlayStation 4 and Xbox One versions coming in the first quarter of 2016. The game was previously set to come out September 29.

N-Space said it’s using the time to polish Sword Coast Legends based on player feedback from a recent playtest. Those who preordered, the developers said, will get the upcoming Rage of Demons downloadable content for free, along with access to future “Head Start” testing sessions. The DLC is part of the ongoing main D&D storyline, which publisher Wizards of the Coast released last week in the “Out of the Abyss” set.

What’s special about Sword Coast Legends is that it comes with Dungeon Master tools for creating your own campaigns — adventures that can be “almost limitless,” N-Space president Dan Tudge told GamesBeat in a March 1 interview.