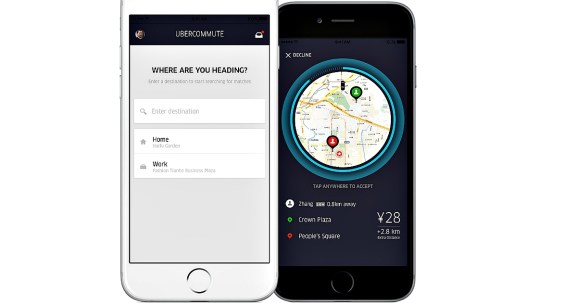 Uber announced Wednesday that it is debuting its new UberCommute service in the city of Chengdu, China.

It shouldn’t come as a surprise that Uber has opted to skip the U.S. market altogether with this latest new product launch — the company is aggressively expanding in China, and has just closed fresh funding for Uber China, its local entity in the country.

That said, the company did admit that this is the first time it’s launched a new global product off U.S. soil. It said Chengdu is now its “number one city in the world.”

“Drivers sign into the app and tell Uber where they are going,” Uber said in a launch statement. “We then show them requests from riders who are traveling in the same direction as well as the payment they will receive for the trip. The driver can then decide whether to accept the request or not.”

“For riders, it’s Uber as usual. They simply select People’s Uber+ (our Chinese UberPool service), input their destination and then our systems match them with a driver going the same way,” it added.

Uber chief executive Travis Kalanick recently discussed carpooling, and how it isn’t as profitable as the rest of the company’s business.

“We’ve chosen China to pilot UberCommute — the first time we’ve launched a new global product outside the United States — because of the tremendous appetite amongst Chinese drivers and riders for creative new ways to get from A to B, affordably and reliably,” Uber said.

“Over time we hope to adapt UberCommute for other cities around the world so that more people can carpool, helping reduce costs for everyone while also cutting congestion,” it added.

We reported last week that Uber was trialing easy-switching business profiles, and expect to see a full rollout soon. As for China, specifically, its major partner in the country, Internet search giant Baidu, announced that it has hit 300 million monthly active users on its mobile app.

The integration with Baidu Maps allows for users in China to hail an Uber ride from right inside the app — an important strategic tie-up announced last year that is helping the foreign giant make solid progress in the country.

“When people can push a button and get a ride in minutes they are less likely to drive themselves — so instead of thirty people using their own cars, you have one car serving them all,” Uber said.

“But that is just the start. In many cities, such as San Francisco, New York, Chengdu, or Paris, so many people now use Uber that there are a ton of duplicate rides — passengers wanting to get to the exact same place at the exact same time. With services like UberCommute and UberPool we’re making it possible for them to share the ride,” it added.

The company also launched UberPool in India this week, and says it’s now in 12 cities around the world. As for China, it’s in five major cities — Chengdu, Hangzhou, Shanghai, Guangzhou, and Shenzhen.

But it can’t sit back and relax yet. Its homegrown competitor, Lyft, just partnered with its main China rival Didi Chuxing (formerly Didi Kuaidi) to allow users of both services to hail rides cross-platform when travelling between the U.S. and China.