Halo 4 was the end of the Master Chief and Cortana love story. But the iconic hero supersoldier is coming back in Halo 5: Guardians for his first appearance on the Xbox One.

The game debuts on October 27, and it represents Microsoft’s best chance to capitalize on the community of 60 million Halo fans and create a competitive advantage for its Xbox One game console in competition with Sony’s PlayStation 4. This time, there’s a new conflict between Master Chief and one of his own, agent Locke, who is a kind of rival Spartan.

The title is also a big chance for Microsoft’s 343 Industries (the studio created to handle the Halo franchise after original creator Bungie spun out to create another first-person shooter, Destiny) to show what it can do with huge investment of time and money. We played all parts of Halo 5 — a preview of the single-player campaign, the esports-like Arena, and the massive Warzone multiplayer mode — and then talked to one of the guardians of the Halo franchise, Josh Holmes, the executive producer for the game.

Holmes talked to us about how 343 is servicing the longtime fans of Halo and how it has honed the story, multiplayer, and cooperative play in the upcoming game. Will the new title be worthy of the Halo name? In the background, we were listening to cheers as multiplayer combat rounds became more intense. Here’s an edited transcript of our interview.

And here’s our interview with Xbox chief Phil Spencer and our preview of Halo 5. 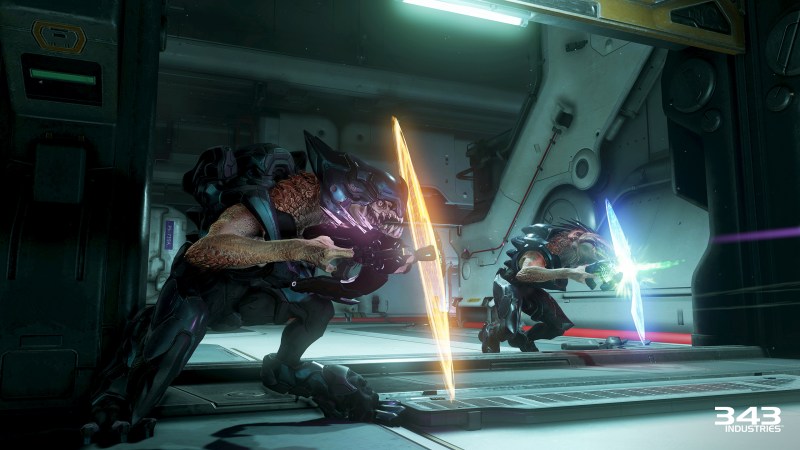 GamesBeat: I got to play two of the missions here. I don’t quite grasp entirely what the story is getting at. If you’re setting this up without really spoiling it for anybody, what sort of preamble do you tell?

Josh Holmes: The story takes place after the events of Halo 4. At this point we have a series of cataclysmic events threatening colonies across the galaxy, mysterious events. The UNSC is trying to figure out what’s going on. Early in the story Master Chief goes AWOL for uncertain reasons. This leads the UNSC to deploy a new squad of Spartans to find out why Chief and Blue Team have left the ranks, and what connection – if any – that has to these events.

That’s the setup. It’s told like a mystery, deliberately. The player, as Locke, is following in Chief’s footsteps and trying to unravel why he’s doing what he’s doing and where everything will lead.

GamesBeat: This is why Master Chief and Locke seem to be at odds? They’re not on the same mission.

Holmes: They’re very different characters. That’s intentional. Designing Locke and writing the new character, we wanted him to feel distinct from Chief. We wanted him to be a person who would ask Chief the kind of questions we want him to ask over the course of this mission.

GamesBeat: As far as airtime goes, is it largely about those two? When I think back on Halo 4, a lot of time was spent focused on Chief and Cortana.

Holmes: This is an interesting departure from Halo 4 in that it’s an ensemble cast. In Halo 4 we were very focused on those two characters and this intimate relationship they had against a backdrop of action and high-stakes drama. In this game, we still have Chief at the center of it all, but he’s now surrounded by a team of Spartans. We have a second team of four that are tracking him. Finding the time to explore all those characters and give each of them a chance to establish themselves was an interesting creative challenge.

GamesBeat: How did Nightfall set up some of this?

Holmes: Nightfall introduces Spartan Locke. At the time, Locke was still an agent of the Office of Naval Intelligence. It’s his background before he became a Spartan. It shows viewers the man he was and who he is at his core before he joined the Spartan program.

As a new Spartan in Halo 5, he’s been put at the helm of Fireteam Osiris. They’re a brand new squad, which is very different from Chief and Blue Team, who have known each other since childhood. They’ve fought together and trust each other. They know what each other member of the team is going to do without even thinking about it. They operate on instinct. Locke and Osiris are still finding their groove together, learning about one another and figuring out their places. Locke is still learning what it means to be a leader. That’s all fertile ground for the story.

GamesBeat: Playing Blue Team really seems to change the campaign. All of a sudden, the Hunters don’t seem so invulnerable anymore.

Holmes: Introducing three more Spartans requires us to rethink the way we build our encounters and design our characters. In the case of the Hunters, they have new behaviors and new attacks they can do in reaction to the way players can surround them. Before, you could trick a Hunter and get behind them and lay waste to them. Now they have the ability to rapidly turn and smash you. It’s more challenging to take on those mini-boss characters like the Hunters and the Knights than you’d think. 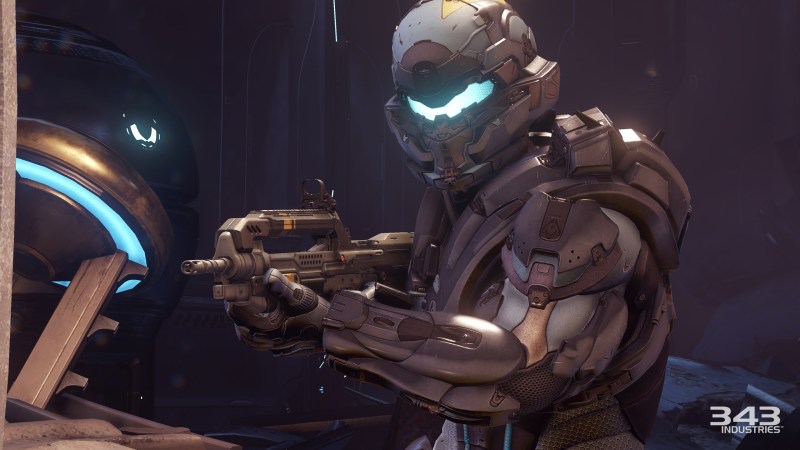 GamesBeat: You’ve shown more levels and modes from multiplayer. What do you have that’s going to surprise returning players?

Holmes: We’ve gone big with this game in multiplayer. We’ve built two distinct experiences within the multiplayer suite. Arena is purpose-built for competitive play. It celebrates everything at the core of Halo multiplayer. We have even starts, a level playing field, a variety of game modes that cater to that taste. It’s built from the ground up for eSports, but it’s there for players of all skill levels.

On the Warzone side, we’ve tried to bring all the best parts of Halo into one colossal mode. It’s multiplayer at a scale that’s never been done before in Halo – the size of the maps, the number of players, dozens of AI integrated into the mode. You have AI bosses coming in. The scoring system is very different. You have all these choices as a player. Do I want to try and support my team by taking down bosses? Do I want to go capture bases and score that way, maybe even get a shot at taking out the core in the enemy home base? Or do I just want to contribute by shooting opposing players and whittling them down? There are all these different ways you can contribute in that mode. It never plays the same way twice.

GamesBeat: How do you explain the requisition system since that’s brand new to everyone? What should players strategize around?

Holmes: Requisition is a reward system, basically. It supports all of our multiplayer experiences. You earn req packs by playing in Warzone or Arena. There are cosmetic items that carry across both experiences.

For Warzone specifically, all the weapons and vehicles and power-ups and gameplay-impacting things you can unlock within the req system are limited to Warzone. New players, I hope, will have a great sense of discovery as they open packs and find cool stuff and deploy these cool weapons in Warzone. But there is a lot of strategy there as far as what you deploy, when you deploy it, and how you expend your req energy within each Warzone match. You have this governing system that prevents you from going willy-nilly with any part in your inventory.

GamesBeat: One of the worst things you can do is go in and lose your vehicle to the opposing team.

Holmes: I did that earlier today. I got myself an awesome rocket ‘Hog, took it over to the enemy base, and promptly got sniped. It was disappointing.

GamesBeat: I found that if I got a Warthog, I couldn’t count on someone getting in the back to shoot people. I was just driving around.

Holmes: I should have let you guys know ahead of time, but we added a new mechanic in the game where you can rapidly switch from the driver’s seat to the gun by pressing jump. You’ll swing out of the driver’s seat, get on the gun, and start shooting. But it takes a half-second or so. That’s what I was doing when they sniped me.