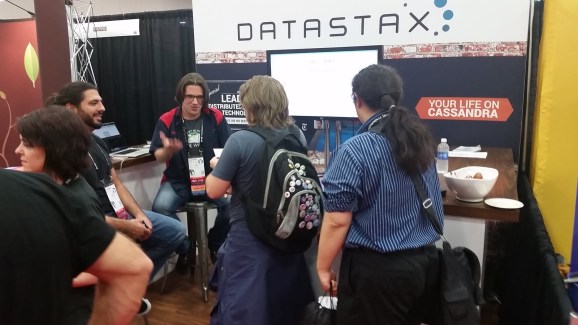 The DataStax booth at OSCON 2014 in Portland, Ore.

DataStax, a company selling licenses for a premium version of the Apache Cassandra-distributed NoSQL database, is announcing today that it has formed a strategic partnership with Microsoft.

“Through this alliance, DataStax and Microsoft are working together to create enhanced enterprise-grade offerings for the Azure Marketplace that reduce the complexities of deployment and provisioning through automated ARM scripting capabilities,” DataStax said in a statement on the news.

Azure has its own proprietary NoSQL database as a service, DocumentDB. But that database is intended for storing data in JSON documents, while Cassandra — which is inspired by Google’s Bigtable and Amazon’s Dynamo papers — emphasizes its reliability through replication across multiple sites.

Microsoft had not previously partnered with any major NoSQL database company, such as CouchDB, Basho, or MongoDB. In the Hadoop market, Microsoft has been more active, having partnered in the past with both Cloudera and Hortonworks.