Following the release of Firefox 41 just yesterday, Mozilla today updated the beta version of its browser to version 42 for Windows, Mac, Linux, and Android. This is a massive release, as Mozilla wants its users to test a slew of features, including its new experimental private browsing mode with tracking protection.

Our hypothesis is that when you open a Private Browsing window in Firefox you’re sending a signal that you want more control over your privacy than current private browsing experiences actually provide. The experimental Private Browsing enhancements ready for testing today actively block website elements that could be used to record user behavior across sites. This includes elements like content, analytics, social and other services that might be collecting data without your knowledge.

The new private browsing mode also has a Control Center with all of Firefox’s site security and privacy controls. To try it out, click the hamburger menu button (three lines in the top right corner), click the New Private Window icon to launch a Private Browsing session, and you’ll see a screen that confirms Tracking Protection is on. Now all you have to do is browse the Web as usual. 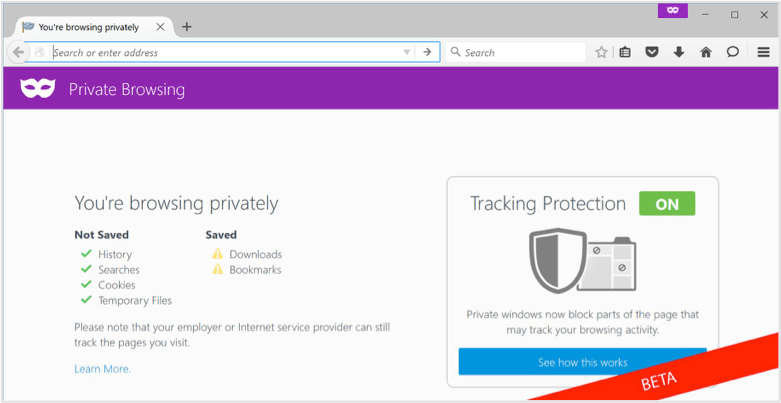 In August, Mozilla added the new experimental feature to Firefox Developer Edition for Windows, Mac, and Linux, as well as the Firefox Aurora channel on Android. Now it’s arrived in the beta channel, though Mozilla didn’t say when it expects it to arrive in the stable channel.

The other big highlight in Firefox for Windows, Mac, and Linux is the addition of tab audio indicators. We broke the news in July that the feature was coming to Firefox, it came to Firefox Nightly later in the month, and now it’s finally available for beta users.

This functionality has been available as browser add-ons and extensions for a while, but users want it built into the browser. While Chrome has had audio indicators for more than a year now, it still doesn’t let you easily mute tabs. The option is available in Google’s browser, but it’s not enabled by default (you have to turn on the #enable-tab-audio-muting flag in chrome://flags/).

As always, there are lots of changes developers should take a closer look at.

While Firefox 42 beta is a bigger release on the desktop, the Android app is still getting some notable improvements. Aside from the new private browsing and tracking protection, the biggest one is probably being able to open links from Android apps in the background.

Here is the full Firefox 42 beta for Android changelog:

Mozilla is planning to release Firefox 42 at the start of November, though not all of these features will make the cut.