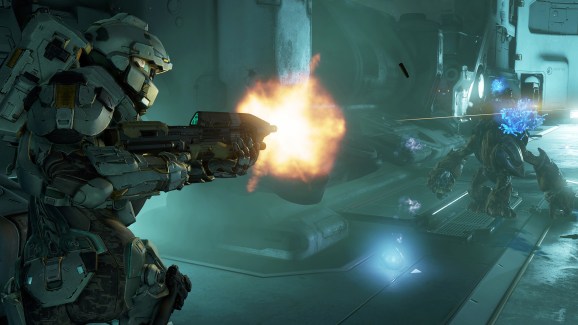 Master Chief is back in Halo 5: Guardians.

343 Industries hasn’t messed up the single-player campaign for Halo 5: Guardians. In fact, you could say the developer has been an excellent guardian of the Halo franchise since inheriting it from Bungie some years back. That much is evident from my hands-on preview of Halo 5: Guardians, which debuts on October 27 as the next big Microsoft exclusive in a series that has sold more than 60 million copies to date.

Our preview provided some clarity into the story that Halo fans have been eagerly awaiting since Halo 4 came out in 2012 on the Xbox 360. Master Chief is back, but he’s sharing the stage with Jameson Locke, the hero of the video series Halo: Nightfall. Since that story, Locke (formerly an agent in the Office of Naval Intelligence) has become a Spartan IV supersoldier with augmentations. In Halo 5: Guardians, Master Chief has gone AWOL, and Spartan Locke leads the mission to find him and discover why. I played through the second level as Master Chief, and then played another mission midway through the game as Spartan Locke. During those missions, I came across some very interesting plot twists. Those twists are interesting, but I won’t spoil them now.

Halo 5 is the biggest game that Microsoft has coming this fall, and it’s going to be the main reason why gamers will choose the Xbox One over the Sony PlayStation 4. (See our interview with Xbox chief Phil Spencer about that). So there’s a lot at stake. The title is also a big chance for Microsoft’s 343 Industries (the studio formed to handle the Halo franchise after original creator Bungie spun out to make another first-person shooter, Destiny) to show what it can do with huge investment of time and money. It’s been three years since we last saw Master Chief. He saved the universe the last time around, and we’re hoping that he does nothing less than that in Halo 5: Guardians.

“The story takes place after the events of Halo 4,” said Josh Holmes, the executive producer of Halo 5: Guardians, in an interview with GamesBeat. “At this point, we have a series of cataclysmic events threatening colonies across the galaxy — mysterious events. The United Nations Space Command (UNSC) is trying to figure out what’s going on. Early in the story, Master Chief goes AWOL for uncertain reasons. This leads the UNSC to deploy a new squad of Spartans to find out why Chief and Blue Team have left the ranks and what connection – if any – that has to these events.”

Holmes added, “That’s the setup. It’s told like a mystery, deliberately. The player, as Locke, is following in Chief’s footsteps and trying to unravel why he’s doing what he’s doing and where everything will lead.” 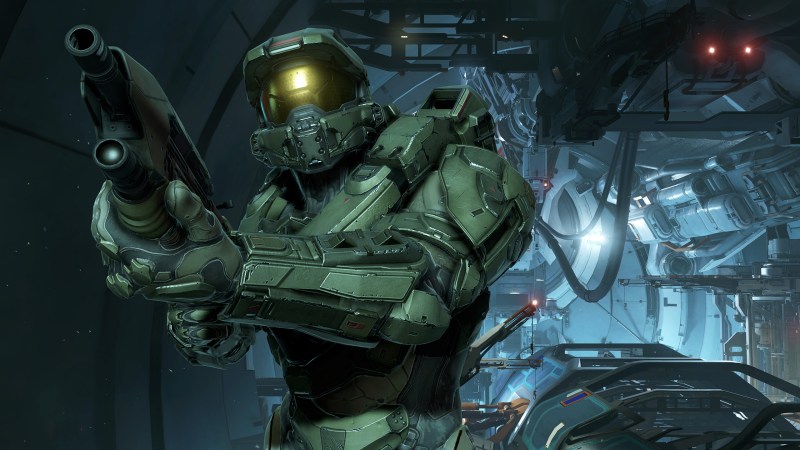 Let’s just say that hardcore Halo fans are going to be happy with both the single-player campaign and the multiplayer combat.

I started out on the second level of the game, the first mission with Master Chief. He is the leader of Blue Team, a squad of four Spartan II warriors who stick together throughout the mission. Their task is to board a derelict USNC vessel dubbed the Argent Moon. The ship was an Office of Naval Intelligence (ONI) research and development vehicle that was missing. Blue Team was dispatched by the UNSC Infinity warship to secure the vessel and its intel.

Blue Team starts out by leaping into space and navigating through an asteroid field. They land on the ship and engage with the Covenant and Forerunner forces aboard. You play as the familiar Master Chief, carrying an assault rifle and grenades that haven’t changed since the very first Halo game, way back in 2001. The graphics of the ship and the fellow Spartans are impressive, as Halo 5 really takes advantage of the additional horsepower of the Xbox One.

Blue Team’s members consist of Kelly-087, Fred-104, and Linda-058. You can tell them apart from Master Chief, or John-117, because they all have very distinct armor. These team members have known each other since childhood, and they trust each other, Holmes said. 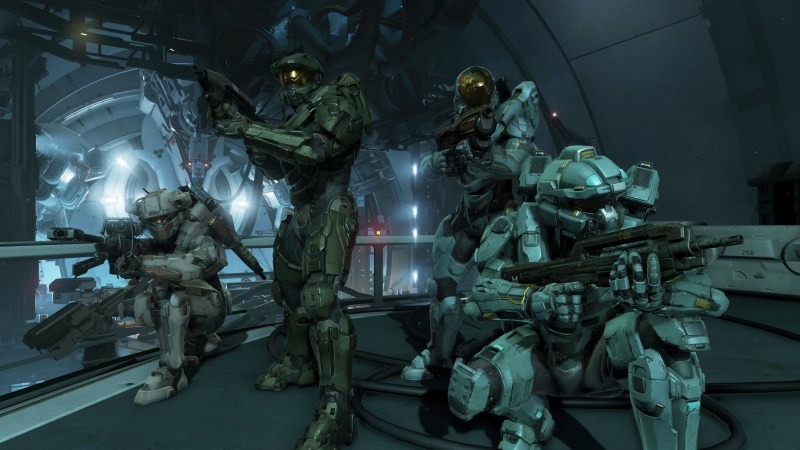 Above: Blue Team in Halo 5: Guardians

As Master Chief, I made short work of the first Covenant enemies that I ran into. But I quickly remembered how fast you run out of ammo with the assault rifle. I had to scrounge for supplies while I took on Covenant Elite, which shimmered nicely thanks to the enhanced graphics. Phosphorescent blue blood was everywhere. With the A.I.-controlled Blue Team to help me, it was quite easy to take out the enemies. Every time I got wounded, I started bleeding out. I could call for help, and one of my teammates would come to revive me.

I had multiple routes to get around tough spots. The levels were vast compared to past games, and they were three-dimensional. Blue Team had to clear out the enemies one room at a time, but now we had more ways to solve problems. We stayed in touch with the UNSC Infinity, which dispatched new instructions for how to proceed with the attack on the Covenant and the defense of the Argent Moon.

Much of the ship was dark. I went down a level as if I were descending a level in the Pirates of the Caribbean ride at Disneyland, within the giant ship. I came upon a vast 3D space where aerial vehicles, dubbed Banshees, could fly. In one firefight, I had to take out a bunch of Covenant by raking them with Banshee fire. Then we had to fend off some attackers and take out a bunch of infrastructure. After that, I had to figure out a way to make a giant leap and get to the next level. It took some serious fighting to survive. 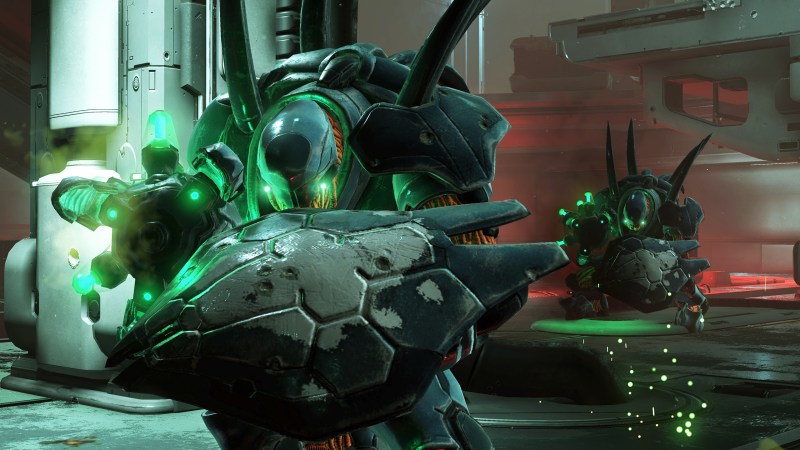 Above: The Hunters appear again in Halo 5: Guardians.

I also came upon some giant Hunters, or tank-like creatures that can only be taken out from behind. In a typical single-player battle, the Hunters are very difficult to kill. But with cooperative play or Blue Team single-player fights, it’s much easier to gang up on the Hunters and take them out. The Hunters have been modified so they can turn around quickly and smash you, so they’re more challenging to defeat.

There’s a fair amount of chatter during the fighting, but I realized that I missed the banter between Master Chief and Cortana, the A.I. character who we last saw at the close of Halo 4.

“In Halo 4, we were very focused on those two characters and this intimate relationship they had against a backdrop of action and high-stakes drama,” Holmes said. “In this game, we still have Chief at the center of it all, but he’s now surrounded by a team of Spartans. We have a second team of four that are tracking him. Finding the time to explore all those characters and give each of them a chance to establish themselves was an interesting creative challenge.”

Hanging out with Locke 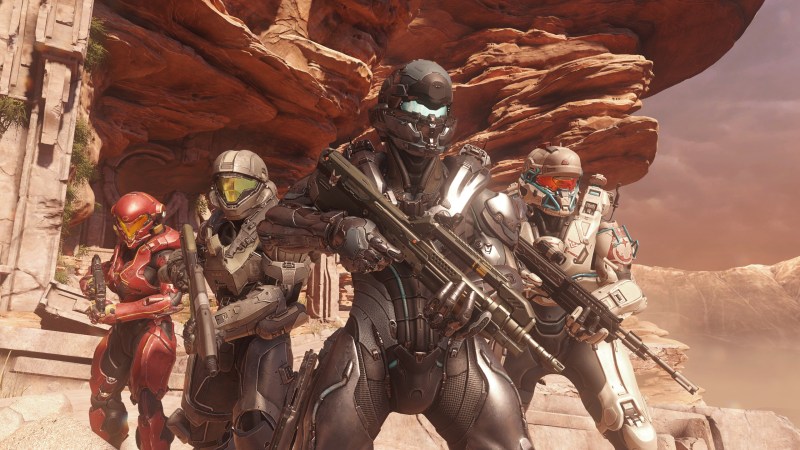 Above: Locke’s Fireteam Osiris in the Enemy Lines battle in Halo 5: Guardians.

Once I completed the Master Chief mission, I played a mission much later in the game as Spartan Locke. Locke’s Team Osiris consists of Buck, Vale, and Tanaka. They land on a desert planet with a lot of canyons, and they have to move through the rock formations and take out some very fortified Covenant positions. They also have to deal with drop ships that are bringing more and more enemies into the battle.

Locke, of course, is a very different character than Master Chief.

“That’s intentional. Designing Locke and writing the new character, we wanted him to feel distinct from Chief,” said Holmes. “We wanted him to be a person who would ask Chief the kind of questions we want him to ask over the course of this mission.”

We proceeded to redo the mission as a co-op team. That made the fighting much easier. We had to group together to take down a giant Kraken, a Covenant ship that was very menacing but had its proverbial weak spot as well.

“As a new Spartan in Halo 5, Locke’s been put at the helm of Fireteam Osiris,” Holmes said. “They’re a brand new squad, which is very different from Chief and Blue Team, who have known each other since childhood. They’ve fought together and trust each other. They know what each other member of the team is going to do without even thinking about it. They operate on instinct. Locke and Osiris are still finding their groove together, learning about one another and figuring out their places. Locke is still learning what it means to be a leader. That’s all fertile ground for the story.”

I’m looking forward to the full game, as I still don’t truly understand the story and how anyone could doubt Master Chief’s allegiance.

As for Holmes, who has been working on the title for almost four years, he said about the fans, “I hope they’ll be surprised. I hope they enjoy the journey we take them on. It’s a different approach to storytelling in Halo, but we’re excited about it. We think it’s fitting for Halo as we move to Xbox One, to make this big leap in the way we tell stories and let people experience the universe. I hope they come away pleasantly surprised.” 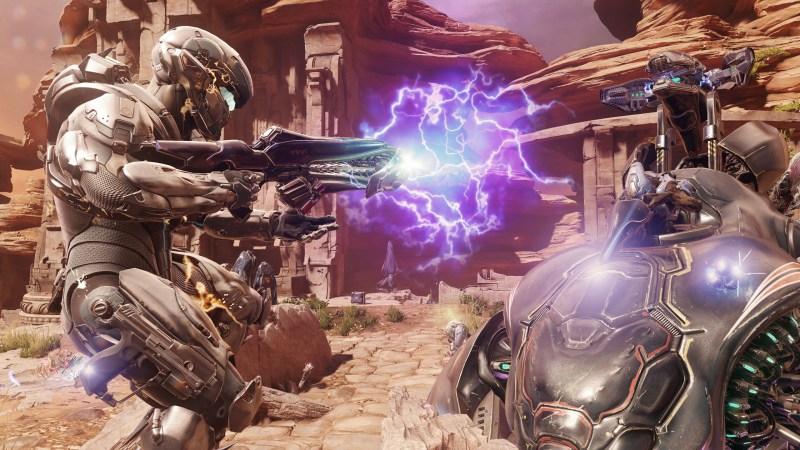 Above: Locke’s Fireteam Osiris engages with Wraith in Halo 5: Guardians.