Star Wars: Uprising may not contain the droids you’re looking for if you want a deep, desktop-style massively multiplayer online role-playing game.

But it does offer a near-perfect mobile experience for quick play on the go and remains true to the Star Wars movie universe — so much so that it’s entrusted with new pieces of the canon.

Star Wars: Uprising is available now, free to play (with in-game purchases), from Kabam and LucasFilm Ltd. on iOS and Android. I tested it on a Samsung Galaxy S6 with Android “Lollipop” version 5.1.1. Having the Samsung’s larger screen likely made it a little easier to hit the right spots for controls.

Above: Hanging out at a port, grabbing missions, and buying upgrades.

SWU doesn’t hold any ambitions of being a great big “Star Wars Game,” but it does a really nice job of conveying the feel of the universe on a small scale. The characters you chat with look and talk like authentic members of the films’ casts, and the gear you obtain has a definite Star Wars aesthetic.

You’ll be sent on a variety of missions to help those characters, and while all of them seem to boil down to “shoot everyone before you run out of health,” the reasons you’re given for being there are different enough to keep you entertained for the few minutes it takes to clear a quest.

The well-written story takes place during the 30 years after the original trilogy, but before December’s Star Wars: The Force Awakens film.

Above: Chatting up a smuggler to get a mission offers a shot at surprisingly engaging dialogue.

MMORPG elements that hold up on the small screen

Running an MMORPG on a mobile platform means giving up some of the depth, but SWU manages to include as much customization as some desktop games. You’ll choose your race and sex, customize your character in a few basic ways, pick from abilities for sale with points your earn from leveling up, choose gear and weapons that will alter your gameplay (melee versus ranged, for example), and upgrade gear and your own abilities to become more powerful.

The choices you’re offered depend on the class and gear you choose. SWU doesn’t offer too many hard-to-make choices, but its crafting systems still pop up with more detail than you’d expect for a mobile title.

You can level up a weapon or piece of armor with parts you find or obtain by breaking down items you don’t need. Once you’ve maxed out a piece, you can upgrade it with more expensive parts to begin leveling it up again. 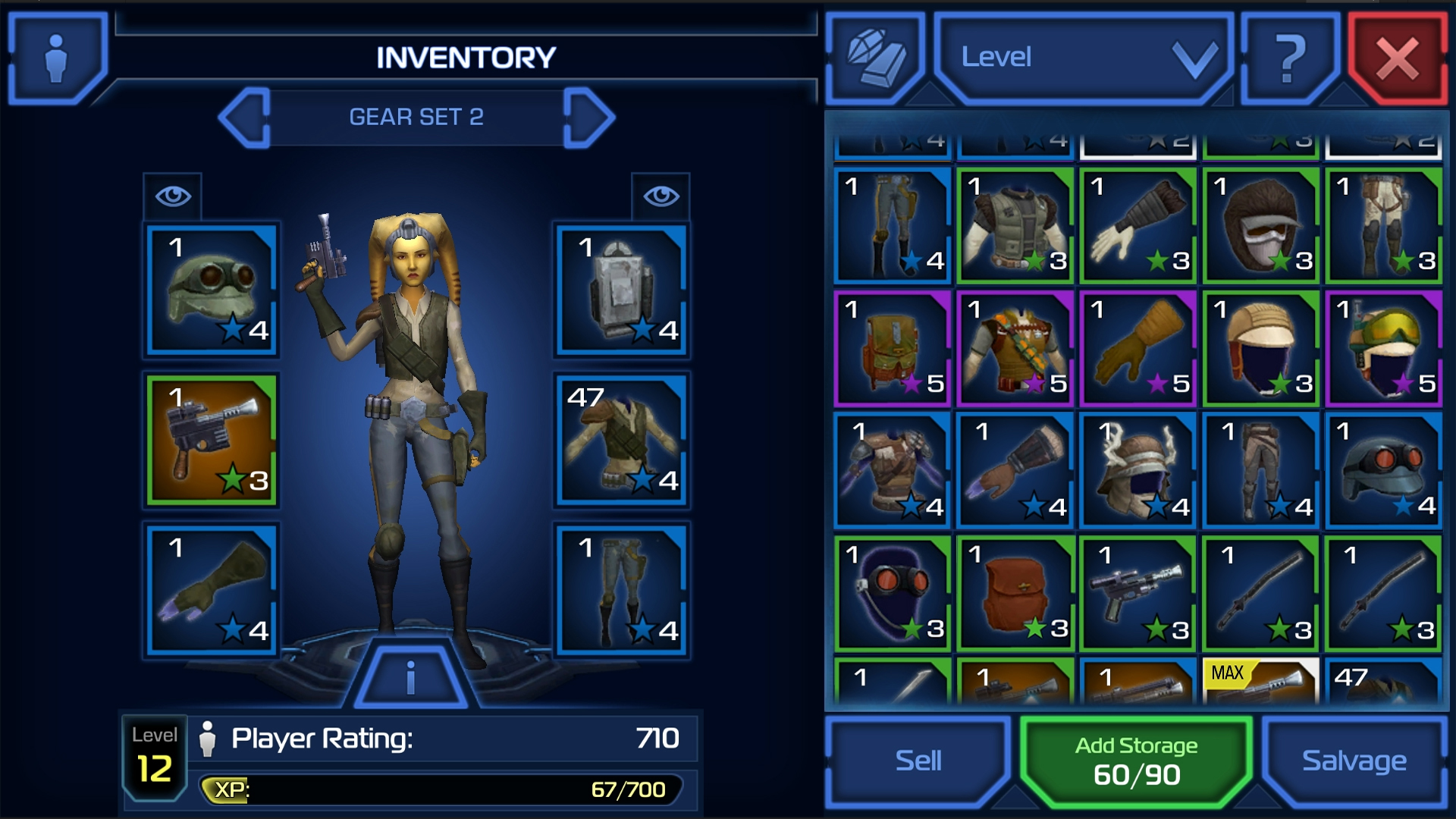 Above: Choose your gear, level it up, and upgrade it using spare parts.

You and your friends can adventure together in SWU, and the game’s simple run-and-gun missions lend themselves to characters dropping in or out as you have someone around to play with. You can also choose new people online to cooperate with, though sometimes finding people at the appropriate level to tackle your missions can be a challenge.

Sector battles open up new content for everyone, but completing them felt fairly random. They begin when the battle-readiness gauge fills up for a planet (see image below), which is driven by all the players completing assault missions there. Once underway, sector battles are won by players completing battle missions. The outcomes depend on so many people that it’s hard to feel like you make much of a difference.

I mostly ended up gaming alone, with other players providing flavor in chat channels and public gathering spaces, which was fine with me. Above: Sector battle progress in a variety of locations.

Enlist the help of your crew

In a mechanic instantly familiar to anyone who’s played the Star Wars: The Old Republic crew system or a World of Warcraft garrison, SWU allows you to collect followers — your crew — and send them out on missions while you’re taking care of business elsewhere (or in real life.) They’ll tackle enemies, gather materials, and do other simple quests, bringing back rewards for the next time you return to the game or their mission screen.

It’s a clever mechanic to reward you each time you play, but it’s also a fun bonus mode for the game. Assembling crew members and the gear they obtain adds an interesting collection aspect to the title. Above: He’s not bad, he’s just drawn that way. A Zabrak trainer offers you new abilities. (You can have Zabrak as members of your crew, too — or play one yourself.)

I can’t speak for the iOS version, but Uprising behaved perfectly on my Android phone. Graphics and action in the game’s top-down, isometric view drew crisp and clear with no stuttering, controls activated sensitively and generally behaved themselves at all times, and the game never crashed, froze, or otherwise caused technical issues.

Leave it for too long and it’ll dump you back at a save point when you return, but each mission is short enough that you’re likely not going to care much.

Star Wars: Uprising is clearly in it for the fun. I played the hardest missions available at each stage, though I didn’t cap out my character’s level during the review. (Quests to raise experience are limited, and you’ll run out after a few hours of gameplay a day, with no way to buy more.) Still, I didn’t run into a single contest that wasn’t easy to complete with a tiny bit of run-and-gun strategy.