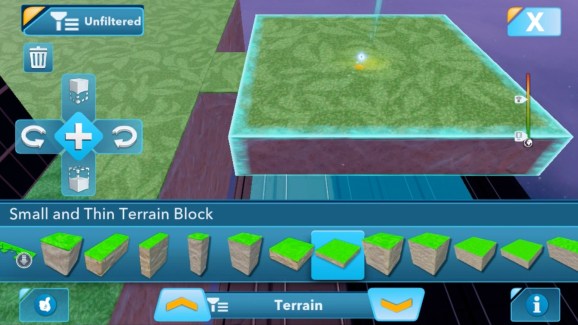 Toy Box 3.0 has arrived on mobile.

Hot on the heels of the console game, and ahead of a PC version, the Disney Infinity: Toy Box 3.0 app aims to keep hold of its strong mobile following. According to Disney, mobile players upload and download more Disney Infinity Toy Boxes than players on any other platform.

The new app includes the general enhancements and new features from this year’s game, but it has also been improved for a touch screens. On opening the app, you can choose between classic and swipe controls.

To accommodate those who are new to Disney Infinity, along with players who already have a collection of toy figurines, you can access in-game characters by entering a web code from the physical product or by making a fresh purchase in the app.

A short video trailer is provided for each character in the purchase menu to give an overview of their abilities and appearance.

For a discounted price, players can access any of the 1.0, 2.0, and 3.0 characters without buying the physical product. They can also purchase the Toy Box Take Over mini-game expansion for the first time.

It’s something Disney has done for a while, but needs to be handled carefully. These digital-only versions must offer value while at the same time avoid frustrating those who have purchased the much more expensive physical figurines.

The app’s release follows news of Disney Infinity 3.0 coming to the Apple TV. Sean Patton, the senior producer for Disney Infinity mobile, was clear that this would be the full game rather than the mobile version that only supports the Toy Box.