If anything turns Microsoft’s Halo 5: Guardians into an esport, it will be the multiplayer mode known as Arena.

Microsoft and its 343 Industries game studio hope that the esports combat in Arena mode will attract professional gamers, inspire big prize tournaments, and keep players training in hopes of being the next big esports gladiator. I played hands-on combat in Arena mode and verified that I’m no professional gamer. Yet I still had fun as the matches often came down to a final shot, resulting in cheers or boos with each end to an Arena battle.

The Halo series has sold more than 65 million copies since 2001 and generated more than $4.6 billion in sales at retail for Microsoft. It has also sold countless Xbox game consoles as the flagship game series that sets Microsoft’s game machines apart from their competitors. The multiplayer modes in these games keeps players engaged year round, which is critical for the hardcore gamers and esports fans who view sci-fi combat arenas as yet another chance to show off their skills. And if a game becomes an esport, it becomes all that harder for competitors to dislodge.

Josh Holmes, the creative director at 343 Industries and the executive producer of Halo 5: Guardians, summed it up in an interview with GamesBeat. He said, “Arena is purpose-built for competitive play. It celebrates everything at the core of Halo multiplayer. We have even starts, a level playing field, [and] a variety of game modes that cater to that taste. It’s built from the ground up for esports, but it’s there for players of all skill levels.”

In multiplayer, players will now have the same set of abilities and weapons when they step onto the battlefield so that it is a level playing field. You’ll be able to earn new weapons and abilities with Halo 5’s new Requisition System, but you won’t be able to use them in the esports-like Arena mode. In that mode, you can only show off cosmetic changes to your appearance, such as customized helmets or armor. 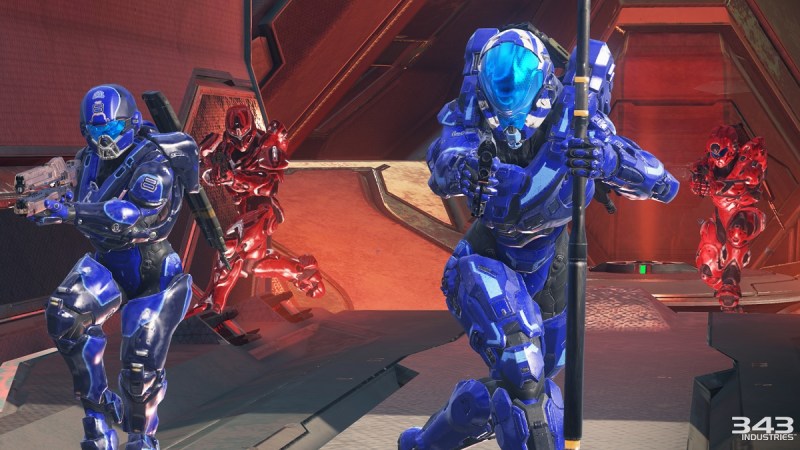 Above: Arena mode on the Coliseum map in Halo 5: Guardians.

In Arena’s Breakout mode, you only get one life. Four players square off against four, in classic Blue vs. Red fighting. Each team starts out at one end of the computer-simulated virtual battlefield. No lives are at stake, which heightens the feeling that you’re at a sporting event.

You’re catapulted toward the middle, and then you can stalk your enemies. You can make a lot of noise shooting from afar or sneak around in stealth. There’s usually a hidden weapon on the level, such as a battle rifle. The first team to kill off the other four enemies wins. And each match lasts until one side has five victories.

In this mode, you can make full use of the changes in Halo 5’s multiplayer-combat abilities, which all go to strengthen the fantasy of what it means to be a Spartan. 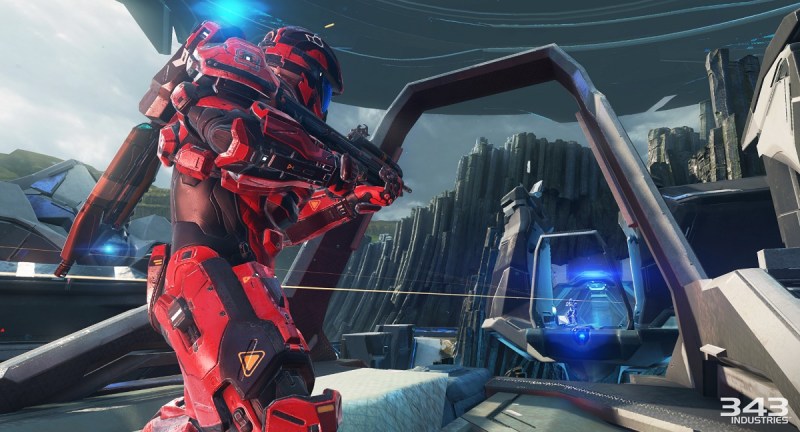 Above: Grab a good weapon in Arena mode on Coliseum map in Halo 5: Guardians

As we noted earlier this year, the Spartan Abilities replace the Armor Abilities as you’ll have a standard thruster attached to your armor now. With something dubbed “Stabilizers,” you can jump into the air and then thrust in any direction (after pressing the left trigger) to extend your jump distances or stay in the air longer. You can hang in the air for a couple of seconds. It makes you an obvious target on the battlefield, but you can use this technique to avoid grenades or explosions. If you’re in the air and press “B,” then you can thrust in any direction using the left stick.

The new Spartan Abilities include “Spartan Charge,” which you can initiate why running at full speed. If you press the melee button (right stick click), you’ll use your thrusters to move at a high speed in a certain direction, ramming any enemies in front of you. It’s simple to learn, and it will severely wound or kill any enemy in your way. But if you mistime it, you’ll make yourself vulnerable to fire and counter maneuvers. If you hit a Spartan from the back, you’ll kill the Spartan with one blow. If you hit from the front or side, you’ll take down the Spartan’s shields.

Another cool but difficult move is the “Ground Pound.” From an elevated position, you jump into the air and then click the “crouch” control, or the left analog stick. A reticle forms around an enemy, and then you bring your Spartan down on the victim’s head. Now it makes a lot more sense to seek out the high ground in a level. This move requires a lot more skill as you have to do a lot of things in a sequence, fast. The expert players will master this move quickly, no doubt. Over time, though, most players will be able to pick up these skills. 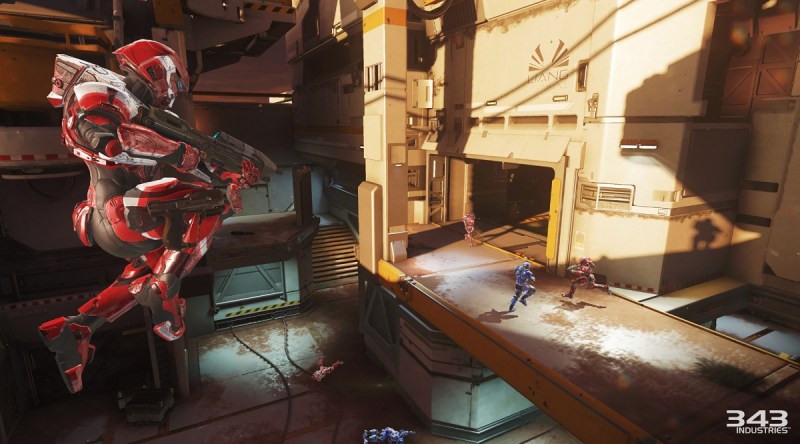 Above: The Rig map in Arena mode in Halo 5: Guardians multiplayer.

Shooting is smooth. If you fire from the hip, you can more easily follow an enemy, I found. That means you can get a couple of more hits in before the enemy escapes. I found that allows you to easily rack up more kills. The game has the same amount of “aim assist” as usual.

The mode comes with voice chatter. Some of that is automated as actors give voice to the battle. But you can also just talk with your friends over a headset, even if you’re dead. Since a dead player can spectate over the shoulder of any surviving player, the dead player can give guidance to the survivors about where the enemies are. Cover is a lot more important in this mode, and you can’t go running around like crazy. 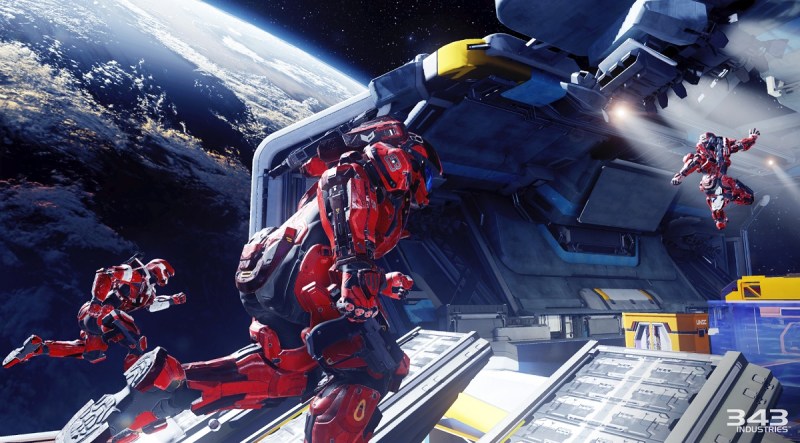 Well, it goes without saying that I’m a lousy Halo player when it comes to multiplayer. Sometimes I get lucky by tossing a grenade in an area where I expect an enemy to run. But for the most part, I usually get killed by somebody else’s lucky toss.

In the Crossfire map, I scored a lucky kill by grabbing a battle rifle early on and picking off a faraway Spartan. After that, I tried going for the battle rifle every time as it was close to me and was in the same spot every time. But then I ran into problems as most of the shot opportunities were short range. And for that, if you aren’t a crack shot with the battle rifle, your enemies will close in quickly for the kill. So that plan didn’t work so well.

My best opportunity came from sneaking up behind an enemy, knocking them with a melee attack, and finishing them off with the assault rifle. I rarely had a chance to get an assassination. Clearly, this happened to me far more often than I made it happen to others.

My team wasn’t really communicating that much, and that clearly made it more difficult. I felt that, with practice, I could get better at Arena. But I found it much harder to get a feel for what to do as I played more and more matches. I think it really pays off to master the new abilities and figure out how to get the jump on your enemies. That’s really the only way to get luck on your side.

My goal wasn’t to win the matches. I just wanted to get one kill before I was taken out so that my side could have a decent shot at winning. I enjoyed watching the spectator mode as the matches came down to the final duel. And after every final kill, one team groaned and the other cheered. 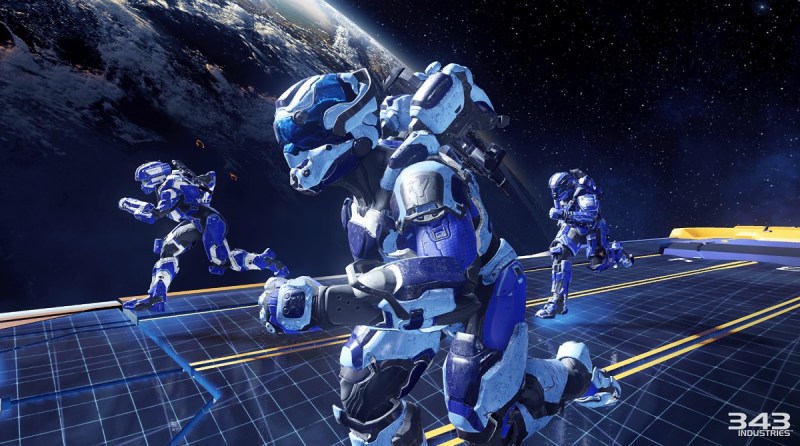 Above: Crossfire map in Arena mode multiplayer for Halo 5: Guardians.

The different maps with Arena mode were a lot of fun. With Coliseum, we played a few rounds of Capture the Flag. This was a good map for that because it has multiple levels. Once one side stole the flag, the carrier could run in a few different directions. Only the organized team could make sure that the carrier was stopped. But it also paid to get the big weapon, such as a rocket launcher or sniper rifle that spawned periodically at the top of level, which was reachable only via ramps on either side.

I grabbed the rocket launcher once and got off a round before someone killed me and took it from me. You could go after the carrier, attacking or protecting them, or you could go for the big weapon and use it to kill off those who were preoccupied with other objectives.

The Rig map was a kind of industrial place with multiple levels for fighting. You could jump from one level to the next or jump down in a Ground Pound assault against those below. The combat was mostly short range, and it was frenetic. I had a hard time staying alive on this map, but I fared better when I trailed behind one of my teammates.

The Crossfire map was clearly computer-generated. It had lots of ramps, angles, and obstacles to hide behind. The corridors weren’t long, but there were some places where you could fire across the map. This was the main map for the 4-on-4 single-death matches. It was big enough to maneuver, hide, or flank. I enjoyed all of the maps, but I had a hard time staying alive on any of them. 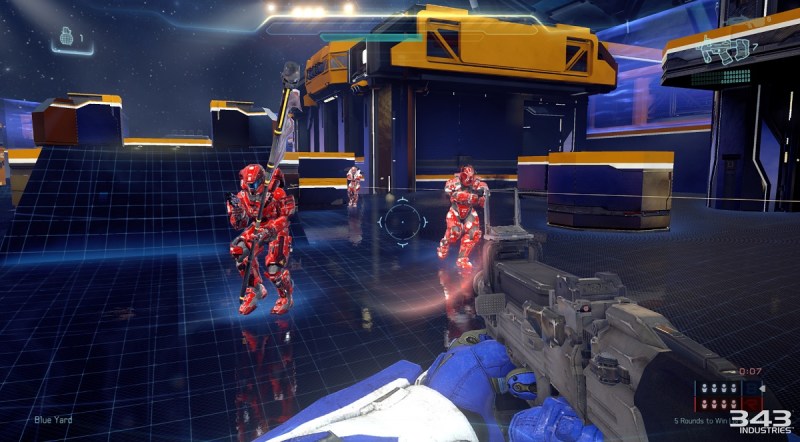 Above: Crossfire map in Arena mode multiplayer for Halo 5: Guardians.

I’m sure that the esports crowd is going to love Arena mode. But it’s very hard to keep from getting embarrassed in every round of combat. Death comes from many different directions. But if you don’t take it too seriously, you’ll at least have a lot of fun.