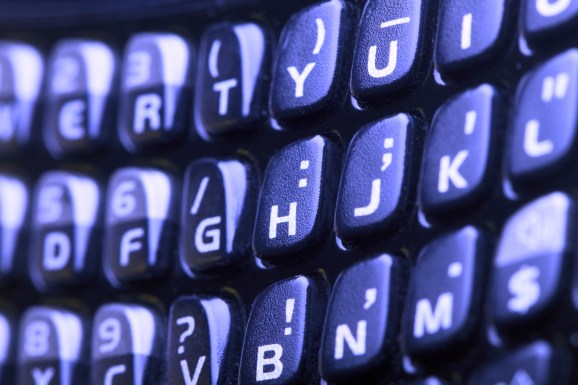 BlackBerry confirmed today that the new ‘slider’ phone it teased at Mobile World Congress earlier this year will indeed be its first Android device.

While the imminent launch of the new Priv Android smartphone isn’t a huge surprise given the wealth of recent leaks, BlackBerry CEO John Chen has explained why the company is finally embracing Android.

With BlackBerry’s increasing focus on enterprise mobile security in recent times — it acquired rival Good Technology for $425 million earlier this month — it’s perhaps little surprise that the company is touting its security credentials with the new phone. “We are collaborating with Google to bring the best of BlackBerry security and productivity to the Android ecosystem,” said Chen.

But it’s interesting that Chen specifically mentioned physical keyboards as one of the company’s core concerns when building its new phone. While many would argue that we’ve moved on from the days when physical keyboards were standard for mobile phones, BlackBerry sees a big potential market for them. And it may be right.

It’s certainly true that one of the reasons BlackBerry has suffered in recent times is the rise of iOS and Android and their respective app ecosystems.

The Canada-based company saw its share value peak in 2007 at $236, the same year the first iPhone launched and Android was unveiled by a “broad alliance of leading technology and wireless companies.” In 2009, BlackBerry shipped around 20 percent of smartphones around the world, and claimed more than 40 percent of the U.S. smartphone OS share. Both these figures are now at less than one percent, and BlackBerry’s shares generally hover around the $7 mark.

The move to embrace Android may come too late to save the company’s hardware business, but it will be interesting to see whether or not BlackBerry can regain even a fraction of its former fans with the Priv. Chen was clear, however, that this launch does not signal the company’s move away from its own operating system. “There is continued demand for our flagship BlackBerry 10 devices like BlackBerry Passport and Classic by consumers, enterprises and regulated industries,” added Chen. “These devices – combined with our network – offer peerless security and productivity advantages. They’re not going away.”