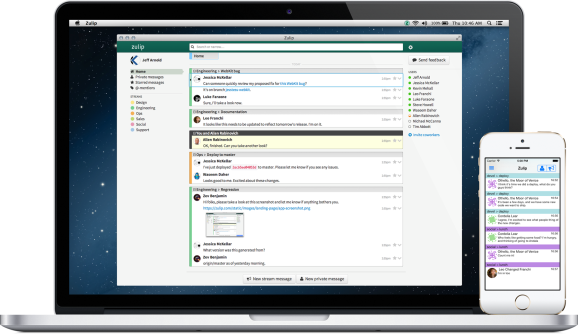 Zuplip on Mac and desktop.

The client and server code is available on GitHub. You can download the client for Mac, Windows, iOS, and Android here.

“The world of open source chat has for a long time been dominated by IRC and XMPP, both of which are very old and haven’t advanced materially in the last decade,” Zulip cofounder Tim Abbott wrote in a blog post on today’s news. “In comparison, Zulip starts with many useful features and integrations expected by software development teams today and has a well-engineered, maintainable codebase for those that are missing. We’re very excited to see what people build on top of Zulip.”

As a standalone group chat app, Zulip has plenty of competition, the most prominent of them being Slack. Threaded conversations — a feature of Convo and Yammer, among others — does distinguish Zulip from Slack in one important way.